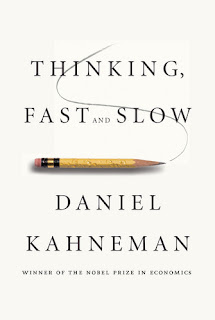 A minor philosophical niggle, this. ‘The Conjunction Problem’ is what Daniel Kahneman, in his Thinking, Fast and Slow (2011), calls a particular problem in probabilistic thinking. It goes like this:

a) Linda is a bank teller.

Kahneman says people will choose (b) as more probable, because they are wrongheaded wrongy wrong-wrongs, the berks. Phil Edwards (in a post discussing something else) summarises: ‘The correct answer is—logically has to be—(a); “A and also B” cannot be more probable than “A with or without B”, whatever A and B are. But we’re not hard-wired to be good at probability; we seem to read the question as an invitation to fill in the blank in the way that gives the most satisfying story, in this case option (b).’

Something about this smells fishy to me. I take the force of Kahneman's point, of course; and we can make it clearer by rephrasing the original question.

Put like that, (a) certainly looks more probable. But there seem to me two problems with it. One has to do with the vagueness with which the question is framed, a haziness that devolves upon being asked to compare a simple with a compound probability. The other has to do with the different valences of probability itself. ‘Given this information about a person, what do you consider plausible extrapolations as to the person's life or work?’ is a different kind of question to ‘this tossed coin has come up heads ten times in a row, what are the odds of an eleventh head?’

It may be, as Edwards suggests, that people plump for (b) because they prefer its implied story, rather than for reasons of pure probabilistic estimation. But then again, that might have nothing to do with it. Conceivably people choose (b) because they simply consider it more probable, irrespective of narrative. Reframe the question another way:


Here's quite a lot of information about Linda, designed to give you a sense of the kind of person she is, so as to feel confident making informed guesses as to the sorts of things she likes and what she does. Which is more probable?

a) Linda is doing something you consider unlikely.

The ‘likelihood’ angle is there in the original formulation as, if you like, Kahneman's sleight of hand, to try and nudge people to the ‘wrong’ answer. But it seems to me, when you frame it this way, it's reasonable to select (b). The thinking would be: (a) is, by definition, unlikely, so it doesn't make much sense to choose it. Of course (b) also includes that unlikely thing, but it also includes something much more likely, so if I select it I'll at least get 50%, instead of the all-or-nothing, weighted heavily towards nothing, unlikeliness of (a). The fuzziness is in the question not specifying whether we are selecting for the likelihood of the statement, or the likelihood of that statement plus literally everything else that might or might not be the case. And when you put it like that (a) becomes not so much unlikely as impossible with regard to anything save the Supreme Being. Quite apart from anything else, that's simply not how we assess statements for likelihood. Is it?

It puts me in mind of a version of the celebrated twins-at-the-fork-in-the-road logic puzzle, I think by Raymond Smullyan. You know the original puzzle. You have to get to Blogtown, urgently. But you've come to a fork in the road and don't know the way. Happily there are two people right there, identical twins, who do know the way. Unhappily, for obscure reasons (perhaps to do with their religion) one of them always tells the truth and the other always lies; and, moreover, they will only answer one question from you. What do you ask? The standard answer is: you pick one at random and ask ‘if I asked your brother which road to follow, what would he say?’ and then proceed up the other road than the one indicated. Fair enough. But the Smullyan solution, which seems to me to have a bearing on the Kahneman dilemma, is: ‘pick one brother and ask him the way to Blogtown. If you have chosen the truth-telling twin, he will point you in the right direction. If you have chosen the liar, he will point along the wrong fork in the road and also, with his other hand,  point down the road along which you have just come.’ That's bonkers in similar ways to the manner of Kahneman's bonkers explanation. Isn't it?
Posted by Adam Roberts at 06:22