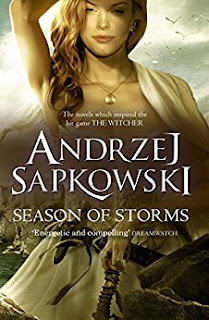 I’m no aficionado of the Witcher video games. I asked my gamer son and he supplied me with one key datum: ‘they changed it so that if you keep killing cows a demon appears to stop you. In the first version you could just keep killing cows, since you got money for each cow, so you could just kill thousands of them and get all the money, but in the third game they’ve stopped you doing that.’ Good to know, I feel. I was aware that Henry Cavill, upon whom my wife has something of a crush, is set to play him in an upcoming Netflix adaptation, but I’d never read any of the books upon which both games and movie are based. So Season of Storms was a first for me.

Season of Storms will be a last for me.

Hoo what a bad book. On the upside, it’s entertainingly bad rather than just depressingly bad: a mismash of High Fantasy generic clichés, with the Witcher himself a Van Helsing/Clint Eastwood gunslinger combo (“the Van with No Name”) roaming the world killing monsters and having sex with large-breasted sorceresses. If there are nuances to this formula in other Witcher volumes I am, and will I’m afraid remain, unaware of them. In this one the Witcher kills a monster, has his magic swords stolen from him and then spends a very long time looking for them. He’s tortured by an unscrupulous magician, gets into more fights, goes on a sea-voyage, fights a cave-troll. There’s a superbly irritating character called Dandelion who interrupts the action with songs on his lute, like the bard in Asterix. The aged king is going to marry a seventeen year old, and this entails some kind of opaque political conspiracy-ising. On his travels the Witcher meets alluring raven-haired women and flame-haired women and sometimes has sex with them.

The whole has been translated out of Polish into a deliberately fruity High Fantasy idiom by David French (‘nought like a Witcher for dealing with troubles!’) and without access to the original it’s hard to know how much is French and how much the echt Sapkowski. Suffice to say the writing is bad: fond of needless repetition (‘Gonscorek was dead. He was, quite simply, deceased’ [35]) and often just baffling: ‘Sorel Degerlund grinned a vicious smile, a smile calling to mind centipedes squeezing through gaps under doors’ [155]. Indeed, sometimes, the sheer pressure of stylistic badness squeezes the prose into something that’s almost memorable: ‘a stentorian voice tore through the hubbub of the fracas’ [34]. But mostly it’s stuff like this:


The bodyguard … was a half breed, the result of a cross between an ogre and a dwarf. The result was a bald dwarf with a height of well over seven feet. [85]

If the seven-foot-tall dwarfs don’t bounce you out of the story, the unreconstructed 1970s sexism might. The women have ‘raven hair’ or ‘fox-red hair’, wear dresses with ‘plunging necklines’ and ‘cross their legs provocatively’. One female character is described as ‘a moderately attractive blonde’ [121] and some of the women are fat, farting hoydens (‘the Witcher, who always maintained there was no such thing as an ugly woman, suddenly felt compelled to revise this opinion’ [17]). But most are boobsome babes: ‘erotically alluring red hair … attractive figure … plunging cleavage’ [47]. A female warrior wears the following practical and credible outfit: ‘leather shorts with the legs split at the seams to accommodate her thighs. Two belts crossing her chest were pretty much all she had on above the waist.’ The Witcher is seduced by a busty sorceress called Lytta Neyd. ‘You lured me,’ he complains, afterwards. ‘Like an insect. With magical freesia-and-apricot pheremones’ [67]. But his insect-pheromone-related objections in no way prevent the two of them bonking all over the place for pages and pages and pages. ‘I do have a bed you know,’ Lytta tells him, a fact upon which the narrator dilates:


Indeed, she did have a bed. An enormous one. The bed was huge and had a canopy. The bed linen was of silk. It’s no exaggeration to say that they made use of the entire bed, of every single inch. Every inch of the bed linen. And every fold of the sheets. [65]


The Witcher brushed Lytta’s hair from her back. Slowly one by one, he unfastened the hooks and eyes and slid the dress from the sorceress’s shoulders. After that he utterly devoted his hands and attention to a pair of galleons under full sail. Galleons one would search for in vain on all the maritime routes, harbours, ports, and registers of the admiralty. [70]

The worldbuilding is perfectly cavalier where consistency is concerned: it’s a pseudo-medieval world of magic, swords, horses, taverns, and castles that is also furnished with wicker chairs, checking accounts (‘“Please make out a cheque for four hundred crowns from the sum to the paid” she instructed the clerk. “I know the bank takes a commission’ [244]) genetic engineering and steam engines. In amongst the many hey-prithee archaisms characters say such profoundly un-medieval things as ‘you can’t judge a book by its cover’ and ‘that says a great deal about the individual’s psychological state’. For every ‘ye gods! Begone I say!’ there’s a ‘there’s a commotion down there in the suburbs’ [116]. The plotting is higgled-piggled, the tone veers all over the place and the overall effect is profoundly adolescent. Then again, so-bad-it’s-good is its own genre, and in this book is a remarkable example of the mode. On the evidence of this, it doesn't look good for poor old Henry Cavill. Serves him right, for my wife having such a crush on him.
Posted by Adam Roberts at 01:24