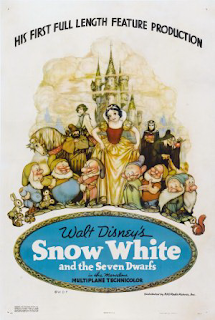 
Snow White had nearly all the narrative features—the tyrannical parent, the sentence of drudgery, the promise of a childhood utopia—and incorporated nearly all the major themes of his young life, primarily the need to conquer the previous generation to stake one’s claim on maturity, the rewards of hard work, the dangers of trust, and perhaps above all, the escape into fantasy as a remedy for inhospitable reality. [Gabler, 216]

Of course, this is only of interest insofar as Disney’s individual experience scales up to society as a whole. That the film was a success—more than a success, a phenomenal success, grossing $6.7 million in receipts by May 1939 and going on ‘to become the highest grossing American [and therefore world] film to that point, eventually surpassing the previous record-holder The Singing Fool with Al Jolson by $2 million’—this suggests that there’s something about the film that resonated with a larger audience. Gabler quotes Bettelheim (‘stories that tell about an aging parent who decides that the time has come to let the new generation take over; but before this can happen the successor must prove himself capable and worthy …’) which seems like an odd observation, both in itself, and in terms of its fit to the Wicked Queen in Snow White. But really, Gabler’s angle is biographical (he is writing a ‘biography’ after all):


Though some analysts would apply a Freudian interpretation ... and others imposed a cultural interpretation in which the film promoted Depression values of hard work and community, the cartoon would ultimately become a parable of Disney’s own young life. He was Snow White, threatened by parental jealousy and capricious power and forced into his own world, the world of animation …

There are several things we can say about Snow White; the question is whether those several things cohere into a single reading of the text. One thing is that the success of Disney’s ‘Snow White’ was more than just the fact that a great many people, worldwide, paid to see the movie at theatres—although, of course, a great many did. But $2 million worth of Snow White toys had been sold by the end of 1938; and another $2 million of ‘Snow White handkerchiefs’ (who knew handkerchiefs were so lucrative?). This is one of the four pillars of Disney’s success—merchandising—and it is striking that it was there from the beginning. Sidebar: what is the biggest grossing movie of all time? Avatar. I know that! It was a pub quiz answer I—not the right one. Oh, really? Was it Titanic, then? One of the Marvel films? Avengers: Infinity War perhaps? No. No? Oh, wait, did you mean highest grossing adjusted for inflation? Gone With The Wind, then. Or the first Star Wars movie? No, again, no. Try again. Well then I don’t understand. Those films top the lists of box-office gross. Ah, but box office is only one way in which a film earns money. Add up the box-office take, DVD sales, franchise rights and—especially—toys and mechandise, and the highest grossing film of all time is …

Anyway, back on topic If ‘merchandising’ is one of the four pillars of Disney success, the others are: art; music and character. The visual component ('and what is the use of a book,' thought Alice, 'without pictures or conversations?) is clearly central, and I’ll come back to it in future posts. The music gets overlooked, in some studies of the Disney phenomenon: but it’s hard to think of songs from the 1930s and 1940s that have the present-day cultural currency as ‘Someday My Prince Will Come’, ‘Heigh-Ho’, ‘Whistle While You Work’ (or for that matter: ‘When You Wish Upon A Star’, ‘Hi Diddly Dee, An Actor’s Life for Me’, or—I could go on). ‘Character’ was something Disney, perhaps surprisingly, kept forgetting. Though I suppose it could be argued that audiences empathized to some extent with the rather drippy Snow White, and connected emotionally with her conflict with the Queen, the move scores especially in the individuation of the dwarfs—the exaggerated yet relatable separate personalities of all seven which, together, somehow aggregate into a single gestalt. That, I’d argue, are where ‘we’ are; positioned as outsider observers by the very logic of cinema itself as the love-story plays through and the beautiful young girl and the handsome young prince pair off.

And that’s the thing that interests me the most about Snow White as a movie. The dwarfs, yes; but the dwarfs as the way the film interpellates masculinity. It is a version of the world symbolically predicated upon the diminishment of maleness. The Queen, wicked as she might be, rules; the core emotional dynamic is between (quasi)-mother and daughter. The film parses 'masculinity' as the threat of violence, of death—think of the huntsman, sent by the queen to knife Snow White to death—but only to unthread it. 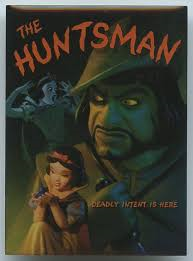 Scary! But of course the huntsman can't follow-through. Look what happens to him in the crucial sequence: 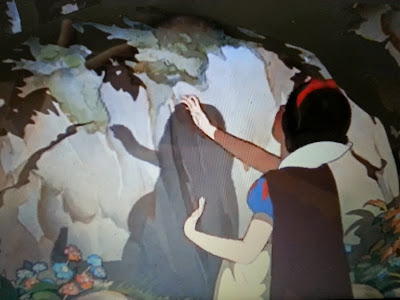 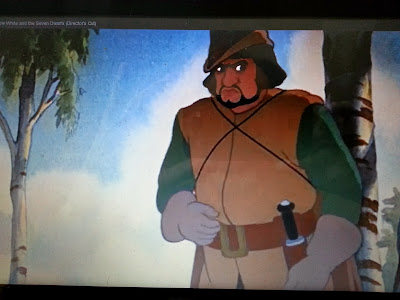 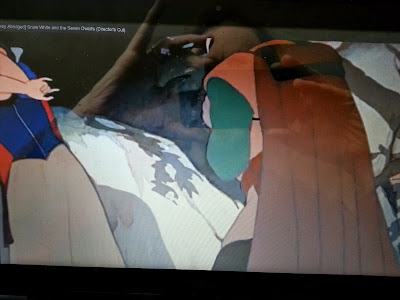 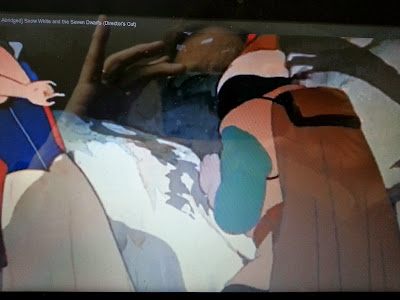 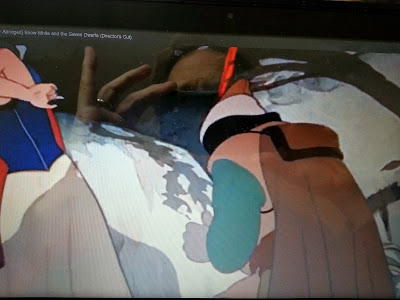 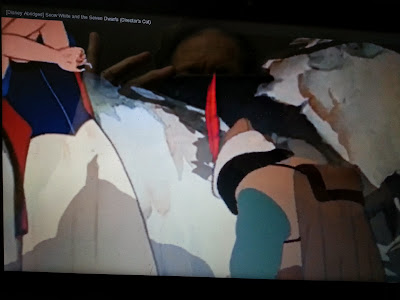 He shrinks! He shrinks before our very eyes to dwarfish dimensions; unmanned, we might say, by his tender heart. The very next scene is Snow White fleeing through the forest and stumbling upon the dwarfs. And from that moment on, until the final scenes with the perfectly blank manikin figure of the handsome prince, it is the dwarfs who carry the ‘maleness’ of the movie. They are, clearly, men—not boys—but they are also childish in stature and in terms of their relationship to Snow White. Infatuated with her, yes: but her bed is not a place for them—the bedboard keeps them all neatly at bay, their variously grotesque penile noses the only things daring to reach past the line of demarcation. 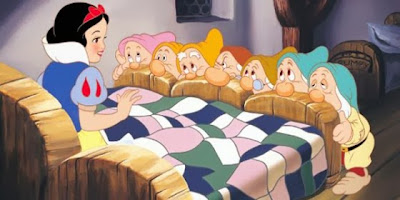 What is all this saying about manhood? Well maybe the point is a subtle undermining of the patriarchal dominance of 1930s US society, but that's a hard case to make stick. After all, one central thrust of the movie is really rather ostentatiously to establish a gendered division of labour. Snow White does work, but only at domestic chores; demonstrating, indeed, her fitness for marriage by showing herself super-skilled at the housework. The dwarfs may be small, but they do manly work in a manly way: digging in the mines and so on. Indeed, they bring out so many and such colossal gemstones it's a bit puzzling they all have to share a small rural cottage: they could surely afford a mansion and many servants. But wondering why they don't do so is to open an interpretive door we probably don't want to open. This land, wherever it is, clearly lacks almost all the infrastructure a functioning society would need. (See also Anne Bilson's excellent blog on the movie, including her livetweeting her viewing of the movie: 'If one of the dwarfs is a Doc, how come he’s working down mines & not operating on people? What kind of Khmer Rouge regime is this anyway?')

The broader point is that, in the words of Steven Watts' excellent The Magic Kingdom: Walt Disney and the American Way of Life (1997), 'Walt Disney operated not only as an entertainer but as a historical mediator … this role was unintentional but decisive. Disney entertainment projects were consistently nourished by connections to mainstream American culture—its aesthetics, political ideology, social structures, economic framework, moral principles—as it took shape from the late 1920s through to the later 1960s'. Perhaps we want to read the film's core shrinkage of maleness as an expression of cultural anxiety; or as a playful sense that 'we' no longer need to be the stuffy post-Victorian embodiments of maturity we were once expected to be. Which is another way of talking about a broader encroaching infantilising of men, leading us from Men to today's overwhelming prevalence of man-boys. Then again, the dwarfs do seem to be having all sorts of playful, childlike fun. And meanwhile, the older woman is passing to the younger woman the Improbably Bright Scarlet Globe of Sexual Allure And Power ('As Used By Scarlet Women Everywhere!'), by-passing the male characters altogether. 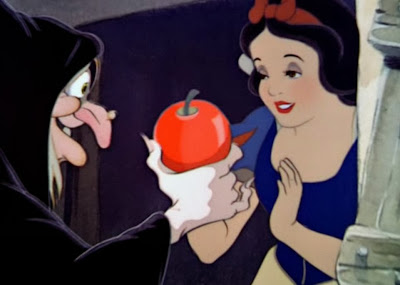 WARNING! Improbably Bright Scarlet Globe of Sexual Allure And Power may cause temporary death. This is nothing to be worried about, and is in fact only 'la petite mort', from which you will awake refreshed and, in some cases, married.
Posted by Adam Roberts at 01:57