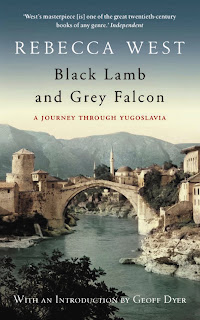 There's a consensus among critics and readers that Rebecca West's enormous travelogue, Black Lamb and Grey Falcon: A Journey Through Yugoslavia (1941) is her magnum opus. Magnus it certainly is: it's more than 1100 pages long, rich and detailed throughout; more a meditation on how history shapes the present, and how both factor in specific identities, societies and cultures. I'm reading it at the moment, in between other things. It's not a book to bolt: full of fascinating detail, often very funny in a mordant kind of way, and advancing several key Westian ideas: for instance that women are idiots and men lunatics. At the book's beginning she recalls being in hospital in 1934, and hearing on the radio ‘how the King of Yugoslavia had been assassinated in the streets of Marseilles that morning’. She adds ‘it appeared to me inevitable that war must follow’:


I rang for my nurse, and when she came I cried to her, “Switch on the telephone ! I must speak to my husband at once. A most terrible thing has happened. The King of Yugoslavia has been assassinated.” “Oh, dear!” she replied. “Did you know him?” “No,” I said. “Then why,” she asked, “do you think it's so terrible?”

Her question made me remember that the word “idiot” comes from a Greek root meaning private person. Idiocy is the female defect: intent on their private lives, women follow their fate through a darkness deep as that cast by malformed cells in the brain. It is no worse than the male defect, which is lunacy; they are so obsessed by public affairs that they see the world as by moonlight, which shows the outlines of every object but not the details indicative of their nature.

This is the sort of idea that gets under your skin, and as West returns to it (several times) in this book, she adds nuance and depth to it. Speaking for myself, I can only push-back against its manifest gender-essentialism; and yet it is saying something quite profound, I think.

At one point, about halfway through volume one, staying in Sarajevo with her husband, West disgresses into a claim that twice in the history of Europe the Slavs have achieved victory over their enemies by allowing those enemies an apparent victory that only, with time, revealed itself to have been a profound, veiled defeat: ‘once, on the simpler occasion, when the Russians let Napoleon into the core of their country, where he found himself among snow and ashes, his destiny dead. The second time it happened here in Sarajevo [when] the heretic Bosnian nobles surrendered their country to the Turks in exchange for freedom to keep their religion and their lands’ [West, BLGF 1:307]. West explains this strategy with what is, in effect, a sketch for a short novel, although not a very comfortable-sounding one.


There is a kind of human being, terrifying above all others, who resists by yielding. Let it be supposed that it is a woman. A man is pleased by her, he makes advances to her, he finds that no woman was ever more compliant. He marvels at the way she allows him to take possession of her and perhaps despises her for it. Then suddenly he finds that his whole life has been conditioned to her, that he has become bodily dependent on her, that he has acquired the habit of living in a house with her, that food is not food unless he eats it with her.

It is at this point that he suddenly realises that he has not conquered her mind, and that he is not sure if she loves him, or even likes him, or even considers him of great moment. Then it occurs to him as a possibility that she failed to resist him in the first place because simply nothing he could do seemed of the slightest importance. He may even suspect that she let him come into her life because she hated him, and wanted him to expose himself before her so that she could despise him for his weakness. This, since man is a hating rather than a loving animal, may not impossibly be the truth of the situation. There will be an agonising period when he attempts to find out the truth. But that he will not be able to do, for it is the essence of this woman’s character not to uncover her face. He will therefore have to withdraw from the frozen waste in which he finds himself, where there is neither heat nor light nor food nor shelter, but only the fear of an unknown enemy, and he will have to endure the pain of living alone till he can love someone else ; or he will have to translate himself into another person, who will be accepted by her, a process that means falsification of the soul. Whichever step he takes, the woman will grow stronger and more serene, though not so strong and serene as she will if he tries the third course of attempting to coerce her. [West, BLGF 1:306-7]

Since man is a hating rather than a loving animal ... as with the naked gender essentialism of her idiot/lunatic distinction, I can only push-back against the starkness, even cynicism, of that little thumbnail of homo sapiens. And yet ...
Posted by Adam Roberts at 09:01