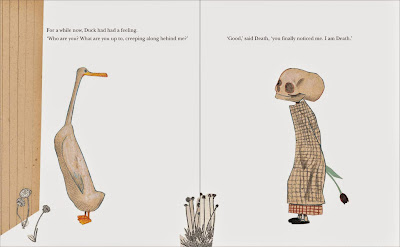 This, from Roberta S. Trites [‘“When I can control the focus” Death and Narrative Resolution’, in Disturbing the Universe: Power and Repression in Adolescent Literature (University of Iowa Press 2000), 118] is interesting:


The greatest difference between how death is portrayed in children’s and adolescent literature lies in the use to which death is put in the literary text. According to Karen Coats. Children's literature is very much defined by children learning to separate from their parents (“Lacan with Runt Pigs” 116-120). Books from The Runaway Bunny to Harriet the Spy demonstrate children learning to individuate by separating from their actual or symbolic parents. Many children’s books are about death: Charlotte’s Web and Ruck Everlasting are two important examples. But in both of these books (and in many children’s books about death), death is portrayed as part of a cycle, as an ongoing process of life. Learning about death seems to be a stage in the child’s process of separating from the parent more than anything else. Wilbur, for example, becomes an adult only after death separates him from his mother figure Charlotte. … Mortality, however, has a different purpose in adolescent literature. In this genre, protagonists come to understand that death is more than a symbolic separation from the parent. Acknowledging death is more than a stage necessary toward growing up and away from one’s parents. Death in adolescent literature is a threat, an experience adolescents understand as finality. Few adolescent novels use the cycle imagery that dominates books like Tuck Everlasting and Charlotte’s Web because the Bildungsroman formula mandates a plot determined by the concept of growth as linear: death is the endpoint of that line. Adolescent literature thus sustains narrative investigations into death that are more than symbolic journeys into separation from the parent. Indeed I would submit that death is the sine qua non of adolescent literature, the defining feature that distinguishes it both from children’s and adult literature.

I wonder if the claim in that last sentence can be sustained. But, yes: it's hard not to think of stories like the Grimms' 'Juniper Tree', Bambi, Lion King (specifically referencing the circle of life!) and Charlotte’s Web on the one hand -- and Catcher in the Rye, The Bridge to Terabithia and Harry Potter on the other.

The image at the top, there, is from the extraordinary and beautiful Duck, Death and the Tulip by Wolf Erlbruch (2007). You can find out more about that story here. 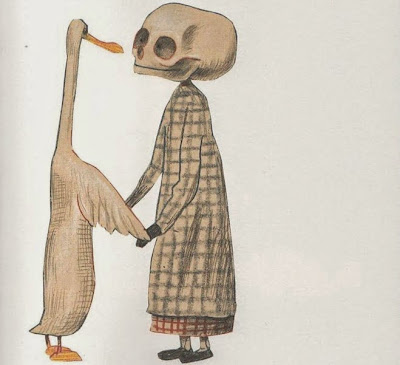