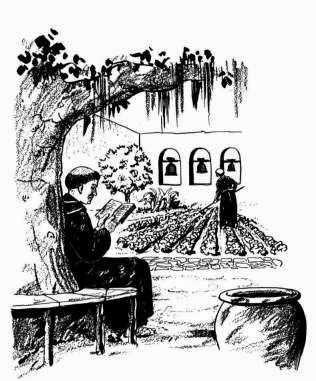 
Or, there's Satan!—one might venture
Pledge one's soul to him, yet leave
Such a flaw in the indenture
As he'd miss till, past retrieve,
Blasted lay that rose-acacia
We're so proud of! Hy, Zy, Hine...
'St, there's Vespers! Plena gratia
Ave, Virgo! Gr-r-r—you swine!

Glossing this, Woolford and Karlin (in what is, I think, the best-annotated scholarly edition of Browning) can't resist a little side-swipe at the myriad scholars who have laboured to explain ‘hy, zy, hine’:


Only two of the astonishingly numerous and frequently bizarre accounts of this phrase carry any conviction, those of G Pitts (‘Browning’s “Soliloquy of the Spanish Cloister”: Hy, Zy, Hine’ N&Q xiii [1966] 339-40) and J F Loucks (‘“Hy, Zy, Hine” and Peter of Abano’, VP xii [1974] 165-9). Pitts argues that B derived it from a medieval liturgical parody, the Mass of the Ass; Loucks that B. adapted the phrase from a string of nonsense words in a medieval manual of magic formulae, the Heptameron, or Elementa Magica, ascribed to Pietro of Abano (c. 1250- c.1316). Browning was certainly familiar with Abano’s work. [Woolford and Karlin Poems of Browning (1991), 2:171]

The multiplicity (and bizarreness) of interpretation has dried-up in recent years, I think; and a consensus generally arrived at, along the lines Karlin and Woodford indicate: the unnamed speaker of the poem is beginning some kind of Black Mass or evil magic charm to 'blast' Brother Lawrence's 'rose acacias', but, interrupted by the chiming of the vesper bells, the speaker breaks off with a final fist-shake at his blandly unaware fellow monk. That certainly makes sense of the poem's final stanza.

I have re-opened the interpretation box, and wish to propose a new reading of 'Hy, Zy, Hine', one I consider consistent with Browning's poetic practice in the 1830s, as well as plausible for the imagied speaker of the poem. And one, moreover, that fits the sense of the final stanza as well as, or perhaps even better than, the consensus. I agree the words are the start of a magic charm, but rather than macaronic or dog Latin, I think they are dog Greek.

The first thing to note is the convention of recording Greek 'υ' in English as 'y' (in his preface to his much later translation of the Agamemnon, Browning makes mild fun of this odd convention: 'it's a wonder we have escaped "Eyripides"'. But conventional it remains). This in turn leads me to wonder the following:

The phrase cannot be twisted into properly grammatical ancient or koine Greek, it's true. But it is strongly suggestive, in the context of the poem's repeated stress on Brother Lawrence's supposed 'swinishness' (not just the poem's last line, but stanza 2's mocking question at the expense of Brother Lawrence's nose, 'what's the Greek name for "swine's snout"?'). With that in mind, note that:

ὗς ‘hys’ means ‘swine’; and I'd argue 'hy' is plausible as an abbreviated or truncated form of the word, because the 's' of ὗς elides with the ζ of ζυ.

ζῷον ‘zōon' means beast, animal; but also ‘form, shape’. L&S also note alternate forms, including ‘ζώϊον’, which is a little closer to ‘zyn’. (Or perhaps the poem’s thinker is half-remembering that ‘ζύ-‘ (‘zy’) is the prefix for words to do with yoking together or joining up such as ζῦγμα (‘zugma’, ‘zeugma’: ‘anything which joins two bodies’; another common component of magical charms).

Might this mean that the words are there to evoke a speaker with poor Greek, vaguely remembering a Greek-language magic charm for transforming an enemy into the shape of a pig? The charm could begin: 'a swine in the shape of a pig ...' (and conceivably continue '... be thou now brought forth' or some such); or perhaps 'swine [assume thou] the actual shape of a pig ...'  That is to say, we can imagine a dog-Greek necromancical charm along the lines of 'let this person's pig nature be made manifest in a swinish exterior form ...' the articulation of which is interrupted before the speaker can finish the charm. 'ὗ[ς] ζύ ὗν ...'

We think of black magic charms as couched in Latin (as they often were); but medieval magic charms phrased in ancient Greek magic were not unknown, as Ogden's Greek and Roman Necromancy (2001) makes plain. After all, the very word "necromancy" is from the post-Classical Greek νεκρομαντεία (nekromanteía), a compound of Ancient Greek νεκρός (nekrós), "dead body", and μαντεία (manteía). All we need now is some charm that starts ὗς ζῷον ὗν ... either in a medieval black magic text, or else in a writer like Hipponax (not Hipponax, though, so far as I can see: I've checked). Surely there must be such medieval charms, designed to turn your enemy into a pig? 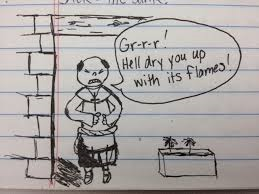