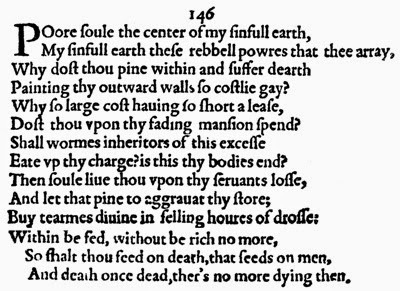 I often use this poem as an early exercise for my first-term first-years (we have 'foundation tutorials' with small groups of these, designed to supplement their regular courses with extra readings, picking up stuff they haven't understood, sessions on essay writing and lecture notetaking ... all that sort of stuff.) I give them a photocopy of the poem. They have to read it, and work their way through the thicket of unfamiliar Shakespearese to get at the meaning. It's usefully estranging for them, because insofar as they are used to Shakespeare sonnets it is as love poetry and this has a rather different focus. After we've worked out what the poem says, we discuss the way the imagery works: the way the tropes keep restlessly changing their terms: the body is a planet and the soul the centre of the planet; the body is a city, being besieged by outward forces (and the soul, presumably, the prince of the city); the body is a decaying mansion (and the soul the house's inhabitant). Then, with the turn at the end of the octave, the scale swings about: now the soul is the master and the body the servant. Now the soul is not confined within the body, but somehow other to it, and -- able to devour and internalise death -- larger than it. Running alongside this, setting up a kind of interference pattern that doesn't facilitate easy comprehension, are a couple of other sets of images. Food and eating is one: worms will eat our dead bodies; but we may be able to eat Death. Another, more obliquely related to these others, is the stock-market flavour of buying 'terms divine' with the money obtained by selling hours of dross. It's a lot to pack into a short poem, and my experience is that students either come to like it -- they'll note, for instance, how craftily S. steps down the size of the comparators of the body (planet, city, house, actual body...) by way of de-emphasising bodily satisfactions and vanities -- or take rather against it. It's a muddle; it's a jumble; that kind of thing.

Then, if the group is awake (and at my prompting if they're not) somebody will spot the metrical eccentricity of line 2. 'Poor soul, the centre of my sinful earth,/My sinful earth these rebel powers that thee array'. They'll usually try to extract some sense out of the repetition of 'my sinful earth', or the garbled syntax of the second line as printed. Then I'll talk them through the circumstances of publication, the unlikelihood of Shakespeare being involved in the publication at all, let alone doing anything so modern as 'checking proofs'. Ahh! they say. The typesetter made a mistake! Then we finish off with the pleasant game of trying to guess what two-syllable phrase has been buried under the (I like to imagine, tired and rather bored) typesetter's inadvertent replication of 'my finfull earth,' from the end of line 1 to the beginning of line 2, complete with comma.

It's interesting to compare different editorial guesses on this point. Some editions of the sonnet simply leave a bracketed ellipse here, as honest if slightly pusillanimous acknowledgement that we can't ever 'truly' know what S. wrote.


Poor soul, the centre of my sinful earth,
[ ... ] these rebel powers that thee array,

This is what the Norton Shakespeare does, adding a footnote: 'there is no way of discovering what Shakespeare wrote; amongt the guesses are "Starved by" and "Foiled by". Fair enough. I've also seen


Poor soul, the centre of my sinful earth,
[Fool'd by] these rebel powers that thee array,

Which, although adopted by several editors, rings false to me: party because the 'f' in amongst the sibilance of the lines many 's's strikes an uneuphonious note (also true of 'foil'd by'), and partly because it strains the sense not of the larger poem but of the specific analogy. Beseiged cities are hardly 'fooled' by enormous armies camped outside them. Or here (Mowat and Werstine in 2010):


Poor soul, the centre of my sinful earth,
[Pressed with] these rebel powers that thee array,


Poor soul, the centre of my sinful earth,
[Why feedst] these rebel powers that thee array?'

That's Thomas Tyler, in 1890: the Victorian Shakespearian explaining himself thus:


The principal subject is manifestly the feeding of the body and soul; and the conclusion come to is, that the latter, and not the former, is to be fed. The emendation, "Why feed'st," is thus suitable. Moreover, the "my" of the first line and the "why" commencing alike the second and third lines may have been the cause of confusion and error. Then, too, there is a verse of Southwell's Content and Ritche which Shakespeare may have had in view:


Spare diett is my fare,
My clothes more fitt than fine;
I knowe I feede and cloth a foe,
That pampred would repine

I don't know if I'm convinced though. For one thing, Tyler is forced by this to add in a question-mark at the end of the line. In the second: why would a besieged city give food to the army that is besieging it? (That might be the whole point, of course; as Tyler's quotation from Southwell implies; but it seems to me to strain the image of the siege). And the idea that the typesetter was distracted y the rhyme of 'why' at the beginning of line 3 to set 'My sinful earth' in line 2 is just daft. Typesetters proceed line by line; if something distracted him in this case it'll be because line 1 is still, in some sense, in my his head.

I've a different suggestion. It strikes me as obvious (so obvious that somebody must have written about this; although I can't at the moment find out who) that the sonnet is a meditation on 1 Corinthians: 15:52-55

I think the sonnet's balancing of corruption and incorruption takes its lead from here ('victory' making S. think of a city being besieged, the notion of death 'swallowed up in victory' being specifically rephrased in the final couplet and so on). Indeed, I wonder if scholars would have gained a clearer sense of this had the typesetter not buried the true opening to line 2:


Poor soul, the centre of my sinful earth,
Stung by these rebel powers that thee array,

This carries the serpentine, worm-y (wyrm-y) hissing of soul, centre, sinful into the second line; the 's' might have tricked the typesetter into thinking the word was 'sinfg or sinfl and lead him to his inadvertence. 'Sting' is an unusual word to describe an army's attack, which might also explain why the typesetter became confused. That said, it is not an unprecedented usage. David Lyndsay, writing about King Harry fighting 'the King of France his greit armie' says: 'Bot thair wes daylie skirmishing,/Quhair men of armis brak monie sting' [The Historie and Testament of Squyer Meldrum, 253-54.] [Update: probably not -- see comments; though stung does have a military sense...]  And again: unlike 'feed' and its variants (which tends, in Stephen Booth suggests, to 'explain the joke' of the poem as a whole), this works more like the line in Hamlet about death's sting -- as a way of pointing the reader back to the Biblical original.

I'll make plain what's implicit here. I'm not suggesting I have magical access to what Shakespeare 'really wrote'. Indeed, I'm suggesting the exact opposite: that the emendations such as the one proposed here ought not to be advanced under the aegis of 'getting back to what Shakespeare actually wrote'. He's an author deader than most. Rather, emendation should be a hermeneutic business, offered by way of advancing a reading of the text. My reading here is that Sonnet 146 proceeds from an imaginative engagement with 1 Corinthians 15:52-55. You may think a different Biblical text is behind the poem (though you'd be hard put to persuade me that the poem doesn't have any Biblical inspiration in its DNA), in which case a different proposed emendation would bring that out. Have at it.

[*Note: to forestall the obvious objection: of course, Shakespeare and his audience didn't have the KJV in 1609; but Tyndale's version is pretty close: 'ye deed shall ryse incorruptible and we shalbe chaunged. For this corruptible must put on incorruptibilite: and this mortall must put on immortalite. When this corruptible hath put on incorruptibilite and this mortall hath put on immortalite: then shalbe brought to passe ye sayinge yt is writte. Deeth is consumed in to victory. Deeth where is thy stynge? Hell where is thy victory?']
Posted by Adam Roberts at 03:51