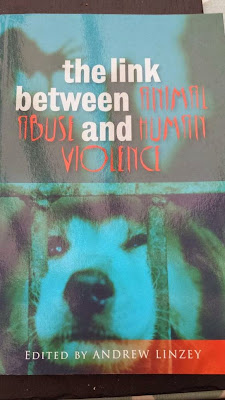 Andrew Linzey is one of the more famous figures in 'animal rights' discourses: an Anglican priest and theologian who has argued across many books (amongst them Animal Rights: A Christian Perspective (1976), Christianity and the Rights of Animals (1987), Animal Theology (1994) and Why Animal Suffering Matters: Philosophy, Theology, and Practical Ethics (2009)) that humans have a divinely sanctioned duty of care to regard animals as innocent beings-in-the-world, to avoid causing them suffering and what's more to adopt a fundamentally Kantian ethical position in regard to them: to treat them as ends in themselves and not means to an end. Wikipedia quotes a few representative positions: 'Animals are God's creatures, not human property, nor utilities, nor resources, nor commodities, but precious beings in God's sight. ... Christians whose eyes are fixed on the awfulness of crucifixion are in a special position to understand the awfulness of innocent suffering. The Cross of Christ is God's absolute identification with the weak, the powerless, and the vulnerable, but most of all with unprotected, undefended, innocent suffering.' He also believes that 'Christians haven’t got much further than thinking that the whole world was made for us, with the result that animals are only seen in an instrumental way as objects, machines, tools, and commodities, rather than fellow creatures.'

This latest collection is true to its, we can be honest, tendentious title: it aims to show that people who are cruel to animals are more likely to be violent to other people. Linzey discusses some of the broader framing of this in his introduction, from two perspectives (one 'from the "human" side' that belongs to those who argue some people who abuse children can be very caring where their pets are concerned, which Linzey simply doesn't believe; the other 'from some animal advocates who fear that the focus on the link [between animals abuse and human violence] obscures the moral case for animals. Animal abuse should be regarded as wrong in itself, they claim, regardless of its adverse effects on human beings' [4-5]). But this doesn't go very far. Mostly the book simply presents papers that in turn present data as evidence for the claim that the kind of people who abuse animals are more likely to be the kind of people who hurt other people. This is pretty convincing, not least because it chimes with common sense. We're all aware of the cliché of the serial killer who learns his trade by torturing cats and so on. Turns out that's not so much a cliché as it is an actual fact in the world. It's worth noting that the sample sizes here are not especially large, mostly. Still: 'of 429 adult inpatient admissions to psychiatric hospital divided into aggressive and non-aggressive samples, 23% killed dogs and cats and 18% tortured dogs and cats (aggressive sample) and 10% killed and 5% tortured dogs and cats (non-aggressive sample) [1979]'; 'of 28 sexual homicide perpetrators, 36% committed acts of animal cruelty in childhood and 46% in adolescence' and so on [31-34]. I can believe it.

There are 27 separate articles in this anthology, not including Linzey's introduction (plus extra introductions to the eight sections into which the collection is disposed): and most of them repeat this point with varying degrees of statistically meaningful evidence bases. The social science idiom of these pieces has the smack of precision about it, but there are larger vaguenesses in the volume that trouble me. One is the core definition of 'animal'. Almost all the papers refer to 'animal abuse'; very few actually define what they mean by animal ('abuse' is more precisely defined). The volume kicks off with an epigraph by R D Laing, quoted approvingly by Andrew Linzey: 'it is quite clear that in abusing animals we abuse our relationship with animals, and that we abuse ourselves. We become less human to the extent that we treat any living beings as things.' It's the sort of hugely over-reaching assertion to which Laing was sometimes prone, and it doesn't stand up very well to hard thought. Any living being? Really? I treat the yeast that turns my mash into beer as a means to an end rather than an end in itself; this hardly diminishes my humanity. I treat my gut flora the same way. This is to make the extreme point, of course; but the case studies of animal abuse in the book as a whole in fact detail a remarkably narrow set of examples: dogs and cats, smaller pets like hamsters, horses and some other farm animals. Mary Louise Petersen and David P Farrington ('Measuring Animal Cruelty and Case Histories') confess that they are concerned with 'domesticated' animals; 'cruelty to other species (insects, fish, etc.) is excluded' [15]. Several essays specify that cruelty entails intentional violence and cruelty towards 'companion animals' and pets: 'given the broad-ranging utilitarian attitudes towards non-human animals (eg farming and husbandry practices), conceptualising behaviours serving a purely instrumental goal in the absence of intention to harm as examples of aggression would clearly be problematic' [Eleonora Gullone, 'A Lifespan Perspective on Human Aggression and Animal Abuse', 39]. But that's a very large tranche of sentient beasts to exclude from your theory. And limiting yourself, as almost all the essays here draw on pet abuse, implies a blurring of the core thesis: is it that people who abuse pets are more likely to abuse animals because abusing pets has that effect because of the pets, or because of the violation of the quasi-familial place pets have in human groups? It's an important distinction, I think. A group of essays (in 'Part V: Ethical Perspectives on Human-Animal Relations', 173-220) do discuss broader ethical questions, but without expanding the discussion very far. At the same time, Linzey certainly wants to cast the net of human moral delinquency wider:


And then there is the phenomenon of "denial" which functions as a way of pushing aside uncomfortable moral reality. What might be called a mechanism of "willed ignorance", of looking the other way, of moral pretence. As T. S. Eliot once remarked: "Mankind can bear little realty." Most of us are animal abuse deniers in that sense; we have some inkling that—for example—the products we buy and our food preferences have some costs to the animals involved, but we push such reality aside. [7]

This passage annoyed me, if I'm honest. In part it's the mangling misquotation of Eliot; partly its a simple disagreement that there is such a thing as 'moral reality'; but mostly its the 'animal abuse deniers' phrase, coined presumably on the model of 'Holocaust deniers'. A number of animal rights thinkers make the comparison between factory farming and mass butchery of edible animals on the one hand and the Holocaust on the other. It nonplusses me. Complicity with the Shoah is one of the gravest moral delinquencies its possible to imagine; it's hard to believe people truly believe that living in a country that ran multiple abattoirs is precisely equivalent to this, morally. Perhaps they do. It's hard to think it possible to believe that, in one's heart, except that one would then do everything in one's power to bring it to an end. But here the problematic rears its head. European Jewry existed before Hitler was born: and would have existed, living, working, raising families, telling stories and so on, had he never come into the world. Cows, pigs, chickens and sheep exist in prodigious numbers in the world today because we raise them for food, and for no other reason. A world in which the entire population converted to vegetarianism would be a world in which these creatures wouldn't exist, because there would be no economic reason to grow them. The claim that non-existence is morally preferable to an existence that terminates in a premature abattoir death seems to me, at the very least, a dubitable proposition. It's one thing to agree that farm animals should not be subject to egregious cruelty; it's quite another to argue that it's better they not exist in the first place.
Posted by Adam Roberts at 12:32