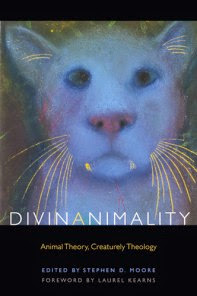 One last notation on this, before I turn to writing up my ideas properly (not for blogging, I mean: for a paying market). I was looking again at Stephen Moore's Divinanimality collection. Now one of the problems I had, here (as I blogged previously), was with the way 'divinanimality' theorists draw on the experiential world of humans and pets, whilst simultaneously stressing the radical alterity of animals. The former, it seems to me, is a complex relationship established over tens (possibly) hundreds of thousands of years, in order precisely to erode the latter. Part of the problem is the fatuity inherent in assuming that the 'special bond' and a quasi-spiritual connection you really believe you share with your beloved pet scales up. My go-to counterexample is poor old Timothy Treadwell (I mention him twice in the various blogposts I've posted this month on this topic). This in turn means I'm interested in theoretical questions of predation. There is a kind of principled vegetarianism that regards humans eating animals as a profound betrayal of our responsibilities of care, trust, community and so on. That seems to me (a) asymmetrical, to put it mildly and (b) to entail practical consequences few animal lovers would embrace, given the scale of the diminution of the number of animals that would be alive on earth if humankind stopped growing them for food.

Anyway, given all this, I was intrigued by the title of Erika Murphy's Divinanimality essay: 'Devouring the Human: Digestion of a Corporeal Soteriology'. But I was disappointed. Murphy identifies a promising area: Christianity of course does have a foundational relationship with the idea of a (divine) man being eaten, the lamb-of-god sacrificed upon the cross, communicants eating his flesh and drinking his blood. But this essay does not persuade me that this speaks to a broader logic of 'the edible human', the human being as preyed upon, and so on. Murphy starts:


Acknowledging that human beings are a consumable product, I contend, is not just a point of ecological correctness: Recognising our fleshy vulnerability may be vital to creating an opening for the divine. [51]

That 'may' is a bit foggy, there. 'Ecological correctness' is odd, too: it is ecologically correct to recycle as much of our waste as we can, in the sense that we ought to do this; but it's surely not the case that we 'ought' to be eaten by bears. I suppose Murphy is implying that a man or woman who considered themselves, somehow, perfectly invulnerable might be closed-off to the possibilities of the divine ('I don't need God: I'm immortal, flawless and impervious to pain!'). So s/he might; but s/he is also a straw wo/man, never to be found in the actual world. Then the turn to bathos:


The philosopher Hélène Cixous draws our attention to human corporeality when she recounts being bitten by the family dog, Fips. After Fips releases his grip from her ankle, she tells us, "I saw the meat we are. We came out of the mortal spasms broken lame and delirious. Unrecognizable." ... Strikingly, the bite draws this atheistic postmodern thinker into the world of the biblical: the experience with Fips echoes for Cixous the narratives of both Job and Jesus.

Muprhy takes this at face value: there's a long discussion of the crucifixion and the eucharist, before she cycles back to 'Fips as Christ figure ... both the attacker and persecuted teacher, the wolf and the lamb' [61].

I found this essay most provoking. Murphy can see there's something interesting about the theological implications of predation and devouring, but hangs back, gesturing in the direction of significance rather than engeging. There's nothing to link the awakening she discusses (the awakening of one's awareness of corporeal frailty I mean) specifically to animals. It might proceed, as with Cixous, via a nip on the heel by Fips; but presumably it might also happen via a broken arm, a skinned knee, a fever; a car crash or a bike accident; or even by observing somebody else experiencing one of these things. Where's the specific animal connection? And the sheer banality of the Fips' nip, the great gulf between what Cixous experienced and what Timothy Treadwell experienced, seems to me entirely to undo the force of the main argument.

It is, I thought, another example of John Holbo's celebrated 'Two-Step-of-Terrific-Triviality'. Viz.:


Say something that is ambiguous between something so strong it is absurd and so weak that it would be absurd even to mention it. When attacked, hop from foot to foot as necessary, keeping a serious expression on your face. With luck, you will be able to generate the mistaken impression that you haven’t been knocked flat, by rights. As a result, the thing that you said which was absurdly strong will appear to have some obscure grain of truth in it. Even though you have provided no reason to think so.

The two steps here are 'being nipped on the heel by a dog makes one aware of the vulnerability of the flesh' on the one hand, and 'Fips is Christ' on the other. It's naked enough, in this essay, for Murphy to anticipate resistance ('Although Cixous never claims Fips is Christ ...'), doing so to row-back only far enough to leave the desired 'obscure grain of truth': 'Although Cixous never claims Fips is Christ his strong somatic presence and grief-stricken bite do lead Cixous to approach the transcendent through the animal etc etc' [61].
Posted by Adam Roberts at 02:11