Scholars from Lukacs on have insisted that Walter Scott 'invented' the form of the modern Historical Novel; but here, more than a decade before Waverley, is an internationally successful exercise in precisely the mode that Scott made his own: Jane Porter's Thaddeus of Warsaw. The earliest edition Google Books has is the fourth edition of 1806: 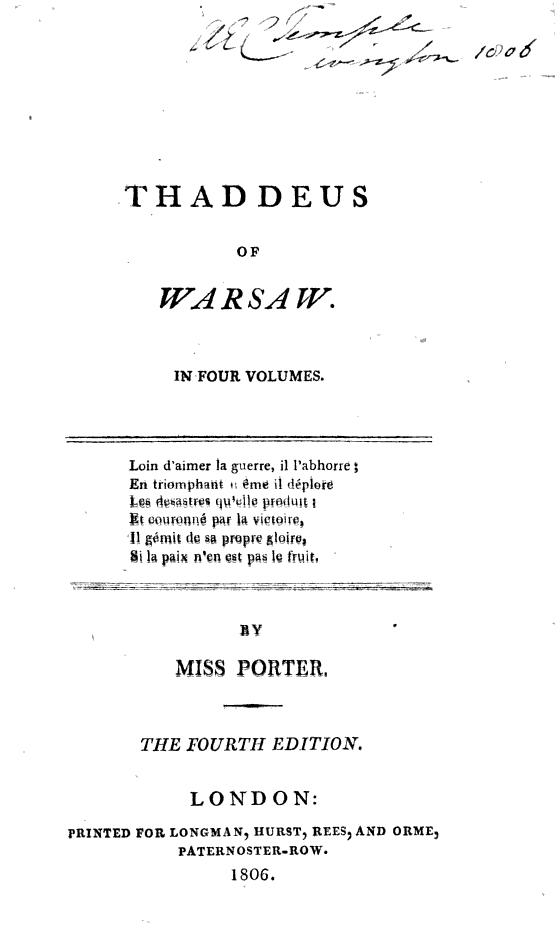 (Here's a link to the in-one-volume revised edition of 1831). Wikipedia draws on the NDNB to tell the rather mournful tale:

It went through at least 84 editions, including translations into French and German. The German edition was praised by Tadeusz Kościuszko, the inspiration for the "Thaddeus" of the title and a hero of the American Revolution, and earned Porter a ladyship from the King of Württemberg. The book was responsible for the name of Warsaw, North Carolina (founded c. 1838). The character of Thaddeus Sobieski was the namesake of Thaddeus Lowe (b. 1832), the father of aerial reconnaissance in the United States, and Pembroke Somerset was the namesake of Pembroke, Kentucky (est. 1836). Nonetheless, in the shadow of Walter Scott's Waverley and the general dismissal of early female novelists by late Victorian critics,[2] Porter came to be so disregarded that the editor of an 1897 edition of Porter's diary took it for granted that her readers would not have heard of her and an 1905 edition of Thaddeus was published as part of a series on Half-Forgotten Books. By 1947, the Marxist critic Lukács felt entitled to argue that Scott's was the first "true" historical novel, which presented the past as a distinct social and cultural setting.

Booo! Porter, in her courteously phrased but still damning preface to the 1831 edition, is quite well aware of her rights of precedence, for all that Scott shot past her in fame: 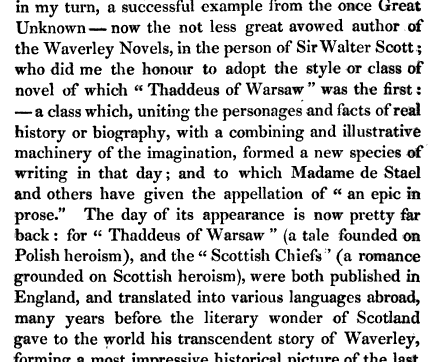 The novel is set during the Second Partition of Poland. The novel deserves to be rediscovered.