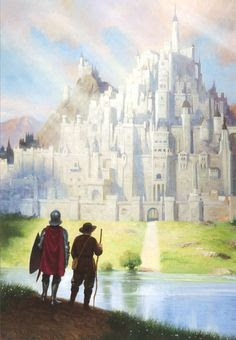 Bunyan's pilgrim comes to the end of his progress when he reaches the Celestial City: 'Now, just as the gates were opened to let in the men, I looked in after them, and behold the city shone like the sun; the streets also were paved with gold; and in them walked many men, with crowns on their heads, palms in their hands, and golden harps, to sing praises withal. There were also of them that had wings, and they answered one another without intermission, saying, Holy, holy, holy is the Lord.'


After tea I finished the first part of the Pilgrim's Progress. The end is poor: indeed nothing shows the lowness (in one respect) of the original Christians so much as their idea of Heaven which they have handed down. Compare this glummery of golden streets and hymn singing with Vergil's "largior hic campos" or the isle of the Hesperides or Isaiah or even Nirvanah. [Walter Hooper (ed), All My Road Before Me: the Diary of C S Lewis 1922-27 (HarperCollins 1991), 327]

This is pre-conversion Lewis of course, but you take his point nonetheless. Glummery indeed! The Vergil quoted is from his account of the Elysian fields in the underworld, Aeneid 6:640-1: largior hic campos aether et lumine vestit/purpureo, 'Here the air they breathe is more free and larger, and it radiantly lights the fields'. Lewis wants the representation of heaven to have more intimations of sublimity, and what Bunyan gives us is pious kitsch, the worse variety of kitsch. His illustrators have, presumably inadvertently, followed him into the vale of Ugh!—a cursory search throws up a great amount of this sort of thing: 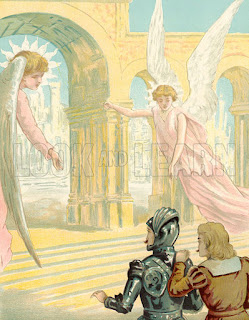 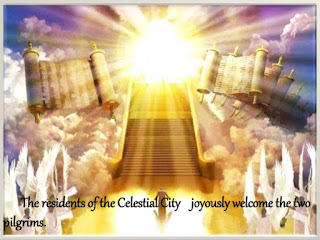 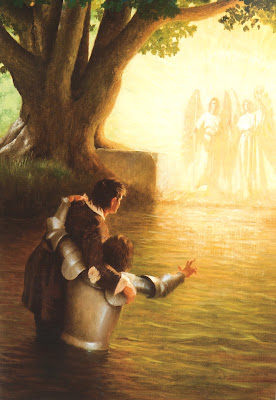 We could, I suppose, walk this back a little by arguing that the focus of Bunyan's book is on the progress rather than the destination—it's not called The Pilgrim's Arrival, after all. Maybe it distorts our reading to put too much emphasis on Zion, rather than on the travelling-hopefully-towards-Zion. The one artist of genius to have had a go at visually representing this moment in Bunyan's book is William Blake, in the (unfinished) edition of the book he worked on between 1824 and 1827. 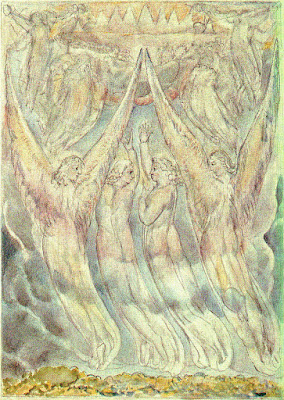 This is better than the other images (well, duh) because it puts aside the pretense of representing the city as a city, gold streets and endless-hymn-singing pedestrians and so on. Instead Blake does two things. One, consistent with all his art (and his poetry) is that he portrays holiness itself as a human form ('For Mercy has a human heart,/Pity a human face,/And Love, the human form divine,/And Peace, the human dress'). Human and angelic bodies take the place of the crenulations of an actual city wall, golden or otherwise. And connected with this is the way Blake takes his cue from one particular element in Bunyan's description of heaven: the crowns worn by the blessed. The triangular pattern at the top of this image—is it supposed to be the city wall, do you think?—is mimicked by the angels'-wings as they meet over Christian and Hopeful's head, a sort of meta-crown. This moment crowns the narrative, Blake is saying, but is not the body of the narrative. That body is the human form divine. No glummery there!
Posted by Adam Roberts at 09:14