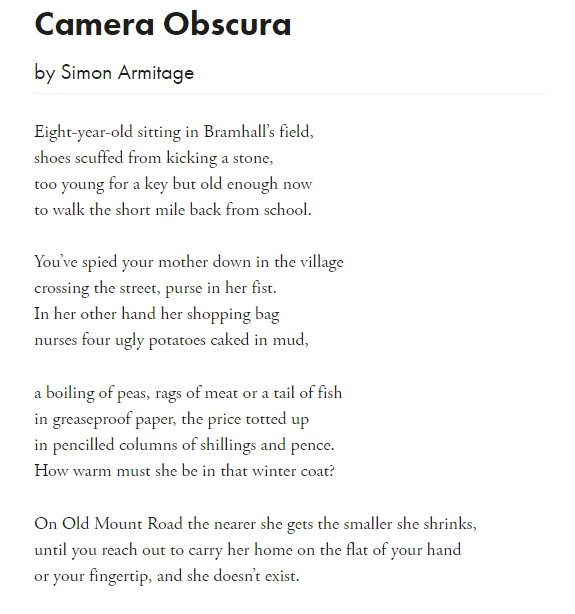 I'm a genuine admirer of Armitage's poems (and his translations), and noticed this one, on the Poetry Review website from a recent-ish issue (Volume 104, No 2, Summer 2014, in point of fact). I'm unsure, having read it several times, whether the last section is supposed to be three long, fairly loose lines, or one single much longer line. If the latter then the poem (deliberately, I suppose) falls just short of being a sonnet, by extending the final line, as the final image shrinks down and the reunion of mother and child recedes, never to be consummated. So I suppose I prefer that.

The obscure room of the title is the sort that produces an image, inverted and small, on its rear wall; which is to say, it is memory. It's a poem of diminution, because memory (it says) is a process of magical image-conjuring that shrinks the object as you reach out to grasp it. You can't apprehend it because the idiom of memory is the past, and the past no longer exists. The eight year old is you (gender not specified, although I suppose the kicking-a-stone implies a boy). But this is not a universal you. It's not, for instance, me: for although I am old enough, just about, to remember pre-decimal currency, I grew up in south-east London not 'the North'. Still the poem makes the move that great poems do, from the particular to something more broadly resonant. In this case the specifics tail off: a whole shopping bag; four potatoes, still in their mud; a 'boiling' of peas and 'rags of meat' until we are at the tail-end of fish. From solid and whole, to fragmented and finally to the rag-end. The larger theme of the poem is the passage of the remembered mother from immediacy to distance, from largeness to vanishing smallness. 'How warm must she be in that winter coat' evokes her physicality, and also conveys her relative poverty: still wearing her winter coat in the spring, or perhaps the summer, because she can't afford two coats—as if the pennypinching adding up, and the purchase of cheap cuts of meat and fish didn't already tell us that. But the gorgeous final image sees her dwindling away to nothing at all.

I like the way the stone of the first stanza leads the mother's 'fist' in the second (she is holding the bag, tightly; but she is also tight-fisted because she has so little money), only to open up into the flat of the hand and the fingertip of the final image. There's something lovely in that unclenched fist; it's also emblematic of memory I suppose, or at least of a certain kind of memory. Or perhaps the final image is more unsettling. It reminds me a little of D H Lawrence's 'Humming-bird' poem, which imagines a huge Jurassic version of its titular avian, only to bring the creature down to modern-day size. Lawrence's poem ends: 'We look at him through the wrong end of the telescope of time/Luckily for us.' Is the circumstance Armitage describes lucky for us? Hard to say. 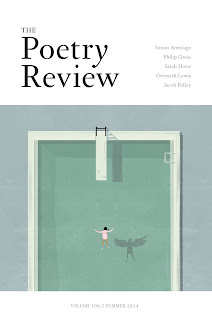