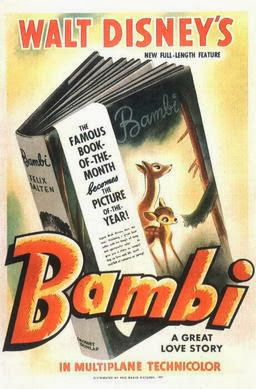 This brief series of blogposts on the first five Disney feature-length animations comes, I'm afraid, to a rather anticlimactic conclusion with my thoughts on Bambi; because I haven't really got any thoughts on Bambi. Of the five, it's my least favourite. I know people who had genuinely traumatic childhood experiences watching this film (Bambi's mother! Dead!!), and maybe that intensity of emotional response bonds a viewer to the movie. Not having had that particular experience, I'm not well placed to say. (That is to say: I didn't see it as a little kid. I caught up with the movie later on, when I was already grown-up). Without that electric moment of affect, the film surely falls back upon a rather underpowered narrative, and a series of pretty but not especially striking visual representations of nature. And Thumper, who's just fucking annoying. 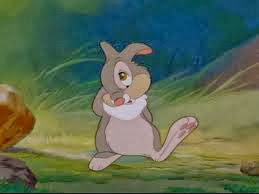 I'm being harsh, I know. I suppose the problem is that Thumper is cutesy without being kitsch. Do I dance with the angels on a moonlit pinhead when I make that distinction? Perhaps I do. But it's my way of trying to get at something that seems to me important, about Disney in particular and about key modes of art that have mattered a lot to me in my life (particularly animation and SF). Cutesy may be part of kitsch, but Kitsch is much larger than cutesy. And Bambi isn't really kitsch enough. No parading pink elephants in this woodland glade.

Yes, it's about death clearly. Wikipedia points to the high praise it has won ('Mick Martin and Marsha Porter call the film "...the crowning achievement of Walt Disney's animation studio." In June 2008, the American Film Institute revealed its "10 Top 10" — the best ten films in ten classic American film genres – after polling over 1,500 people from the creative community. Bambi was acknowledged as the third best film in the animation genre') and also puts its encyclopedic finger on a main reason for that praise: 'it is listed in the Top 25 Horror Movies of all Time by Time magazine. Bambi, Time states, "has a primal shock that still haunts oldsters who saw it 40, 50, 65 years ago".' To swerve away from animation for a moment, I remember being struck by one of the things Rosencrantz says in Stoppard's Rosencrantz and Guildenstern Are Dead (1966):


Whatever became of the moment when one first knew about death? There must have been one. A moment. In childhood. When it first occurred to you that you don't go on forever. Must have been shattering, stamped into one's memory. And yet, I can't remember it. It never occurred to me at all. We must be born with an intuition of mortality. Before we know the word for it. Before we know that there are words. Out we come, bloodied and squalling, with the knowledge that for all the points of the compass, there's only one direction, and time is its only measure.

I read this first as a teenager and it seemed to me right and, somehow, profound. But that may have been. actually, because my own growing up lacked the 'shattering' moment of realisation. For many, Bambi provided just that moment. (Katzenberg-era Disney tried something similar with the death of Simba's Dad in The Lion King, but fluffed the moment by having Mufasa return as a kind-of ghost in the sky. Bambi is more pitiless in its message: dead is dead.) This may be why the film is so under-kitsched: kitsch is not about death, or perhaps it would be more accurate to swing that about and say -- there's nothing kitsch about death. Its universality and inevitability give it seriousness that transcends the sparky restlessness of the truly kitsch. Send not to ask for whom the bell tolls, after all. Perhaps my indifference to this movie is an index of my refusal to accept the importance and gravity of that apperception.

Not that I'm the only one to take refuge from individual extinction in humour and kitschy energies. For example, I give you, Zombi: Fawn of the Dead.
Posted by Adam Roberts at 00:21