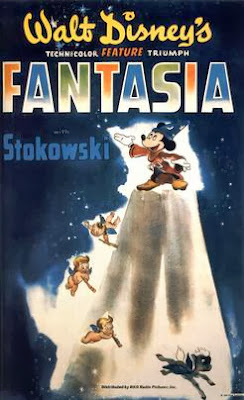 Here’s today’s interesting fact: at one point in 1938 Disney contemplated animating the recently-published The Hobbit, using music from Wagner’s Ring as soundtrack. [Gabler, Walt Disney: the Biography (Random House 2006), 307]. This idea emerged from the initial groundwork for Fantasia, a movie for which Disney had the highest hopes, but which—partly because it was so expensive to make ($2.28 million! in 1940 dollars!) and to screen (it had to be shown with special expensive ‘Fantasound’ systems in cinemas) and partly because audiences just didn’t fall in love with it the way they did with Snow White—lost the studio a ton of money.

Its original cut contains lengthy live-action preludes to each sequence in which Master of Ceremonies and narrator Deems Taylor, dressed in a Conductor’s Tux, condescends so breathtakingly to the viewers that it’s a wonder the original audience didn’t throw chairs at the screen. There’s a set of assumptions at work, familiar from Bourdieu’s Distinction book (of the ‘upper-class people like classical music, middle-class people like easy listening and working-class people like pop’ kind) that are wrong now and were surely just as wrong then; and the idea that we, as audience, have to be eased gently and uncomplainingly into listening to such discordant avant-garde musical assaults-upon-our-ears as Beethoven’s Pastoral Symphony and Tchaikovsky’s fucking ‘Nutcracker Suite’ is—well, insulting, I suppose. But I daresay I overreact.

Stravinsky was asked what he thought. ‘I do not wish to criticize an unresisiting imbecility,’ he said. Harsh! Especially since Disney had paid him tens of thousands of dollars for the use of ‘The Rite of Spring’ and to act in the role of a general consultant for the film. In many way a more interesting response was the review by Dorothy Thompson (a nationally syndicated columnist) who ‘seethed that she had left the theatre “in a condition bordering on a nervous breakdown” and felt as if she had been subjected to an “assault”—a brutalization of sensibility in this remarkable nightmare.” Thompson’s complaint was that Disney and Stowoski seemed to extol the savagery of nature at the expense of man.’ [Gabler, 343]. The movie certainly is a designedly full-on experience, visually; and the ‘Night at Bear Mountain’ ending—or perhaps even more an assault on the senses, the quieter but infinitely more kitsch Ave Maria finale—are pitched to overwhelm.

Worse, the live-action lecturette interludes emphasize the fix-up nature of the whole, to its larger detriment. This is not a coherent movie and doesn't pretend to be one; it’s a string of small movies threaded together on one socially condescending premise: ‘you, yes you, I’m talking to you, will obviously never knowingly step inside a Classical concert hall, so we’re going to use your affection for Mickey Mouse to trick you into getting cultured, you horrible little prole.’ Unfair of me, putting like that, I know. Nowadays, when Classical Music accompanies every second TV advert, when Puccini’s Turandot is an integral part of the enjoyment of World Cup football and ‘The Four Seasons’ is every company’s call-waiting music, the danger is probably the other way about: not that Classical Music needs winching down from its high pedestal but on the contrary that it could do with being elevated slightly, or at least hosed down to wash off some of the odour of commodification. But I don’t want to get all ranty.


Actually, I think the best way of grasping the film as a whole is to separate out its three most successful elements. The abstract sparkles and bow-string lines of the opening Bach sequence is very pretty, in an undemanding sort of way. ‘The Sorcerer’s Apprentice’ has a more complex kind of charm, dependent on Mickey himself, on the (to use a horrible word) ‘relatable’ situation in which he finds himself, and on the splendidly machinic Terminator-like implacability of the Golem-brooms. 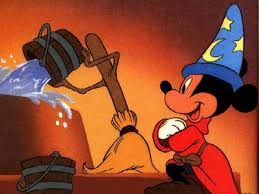 Rewatching this sequence yesterday, I note that this is before the animators learned to draw Mickey’s ears side-on (they are two face-on black circles on top of his pate, and don’t shift their position in the least when he turns his head). It’s also clear that, even though Pinocchio had a whole team assigned just to animating water, the water in this sequence isn’t quite right. It’s too gluey in texture, too silver-transparent shiny, its splashes too soapy and it clings a fraction too closely to the things it dribbles over. It wasn’t until Jungle Book, I think, that Disney managed to get the ‘animating water’ thing spot-on. I say this not to sneer, by the way. Hand-drawing water so that it looks ‘real’ is a mind-boggling challenge, a sort of Fermat’s Last Theorem of animation, and the crucial thing is that Disney, eventually, did it. Otherwise ‘The Sorcerer’s Apprentice’ has two things really going for it: the way it renders its slow, inevitable build—the increasing nightmare of Mickey’s over-reaching position; and the hard-to-deny charm of the child analogue, Mickey himself. I wasn’t so sure what to make of the Wizard, with his Semitic conk and his blue traffic-cone-shaped hat adorned with stars and crescent moons. 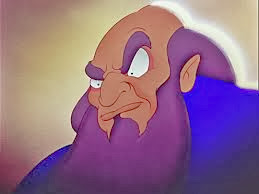 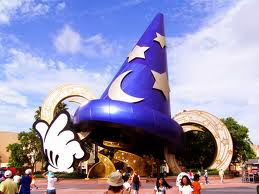 When he comes in at the end and disperses the water he looks like Moses. Is that deliberate?

Thirdly, there's the Hippo Dance sequence. This could have been a wreck, since the central premise (clearly) is the fat-shaming one of ‘wouldn’t it be funny to see really obese women dancing with ludicrously incongruous grace?’ But the sequence is much more than this rather cruel set-up. The gracefulness is quite real here, it what it brings home is (a) the skill of the animators, able to draw so that their two dimensional forms take on appreciable 3D heft and force, and more importantly (b) the understanding that fat people can be just as graceful as thin. Some fat people are graceless, of course; but so are many thin people. The point, rather beautifully rendered here, is that it’s possible to be both very large and a very elegant mover. 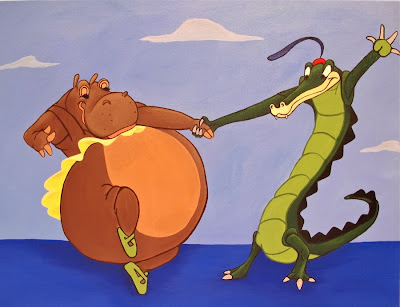 But setting these three sequences aside, the main thing that characterises the rest of the film is: kitsch. It’s kitsch raised to the power of kitsch. I don’t say this to disparage it, mind you: kitsch is a sadly neglected mode of art, I think.

You may choose to disagree with my assessment that the fairies and gnomes sprinkling dewdrops on spiders’ webs in the ‘Nutcracker’ section, or the cutesy fauns and pegasuses (‘pegasi’?) in the ‘Pastoral’ section are kitsch. Doesn’t kitsch require a degree of ironic self-awareness? Isn’t it actually an ineluctably postmodern form of art? Well I’m in two minds on this question. On the one hand I agree with Tomas Kulka (in this, if in not much else) when he argues that ‘making kitsch is not the same thing as making use of kitsch’, and draws his distinction between ‘how kitsch may work in the artworld’ and ‘how kitsch works in the kitschworld’ [Tomas Kulka, Kitsch and Art (Pennsylvania State University Press 1996; 2nd ed 2002), 9]. Nobody who has spent any time at a Disneyland resort can doubt that the kitschworld is precisely the locus of Disney. At the same time, aspects of the ironic mode are a central part of what Disney does; in the humour of it, but also in the very form of it. 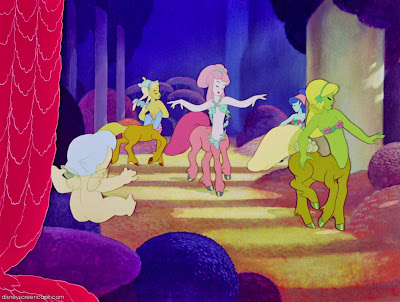 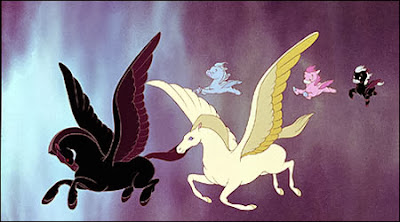 ‘Irony’ is a much larger category than kitsch, of course; and although kitsch generates its affect through its ironic relationship with seriousness it is in itself a much more specific cultural category and must be considered as such. Celeste Olalquiaga suggestively traces the beginnings of ‘kitsch’ to the nineteenth century, linking it with (as she puts it) the way ‘industrialization transformed nature into an artificial kingdom of miniature scale’. For Olalquiaga this aesthetic is ‘at once exhilarated and melancholic’; and although she doesn’t not specifically discuss science fiction she might as well do. The desire to model the cosmos, to ‘reduce’ it to a working scale model—precisely, we might say (though she doesn’t make this particular point) what a cartoonist does to the material of actual life [Celeste Olalquiaga, Artificial Kingdom: a Treasury of the Kitsch Experience (University of Michigan Press 1988), 7]. And there is a weird flavour of melancholy, I think, in even the most ostensibly exhilarating Disney sequences. I don’t mean the out-and-out pathos moments, when (say) Dumbo intertwines his diminutive elephant trunk with the trunk of his incarcerated, weeping mother. I mean something more pervasive: a sense of brightness and colour and variety pushed to the point of monotony; of the machinic repetition of animation itself seeping through, as in Mickey’s nightmare tireless broomstick servants, into the fabric of the film's content itself.

‘Romanticism is outmoded,’ Jacques Sternberg once claimed; ‘symbolism disused, surrealism has always appealed to a small elite but kitsch is everywhere. Even more pervasive and indestructible now that it is fused to a civilisation based on excess consumption.’ [quoted in Thomas Kulka, 13] ‘Consumption pushed to excess’ is, of course, the business model of Disney; and it is in kitsch that Disney assimilates its inventively surreal visual imagination—Disney collaborated with Dalí, after all—its reified ‘symbols’ calcifying all the time into brands, and its out-of-kilter relationship with sentimentality, Romanticisms cousin. 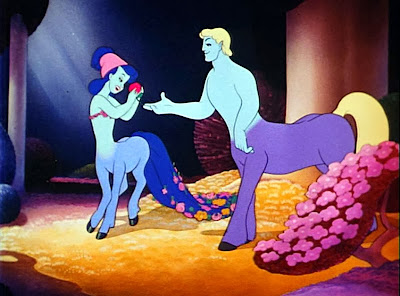 If it didn’t sound so philistine, I’d be tempted to peg key moments in art as bringing ‘something new’ to the table, visual-aesthetically speaking. Picasso’s Demoiselles Davignon brings a new approach to form and visual language; Jackson Pollock brings a new attitude to the brushstroke, the core compository strategy of painting. And so on. Well, by this metric Disney was a crucial figure in the visual avant garde: he brought something quite new—motion, music—to the visual image. This, the kitsch flipside to the clean sublimity of Monet’s ‘impressions’ or Rothko’s abstractions, captures something the ‘high art’ equivalent cannot. It has the same expansiveness and mind-startling wonder about it, but married to a gonzo energy and disrespectfulness that vitalizes it more brilliantly. It has the grandeur, but also a kind of innocence pathos of silliness. ‘The whole point of Camp is to dethrone the serious,’ is how Sontag puts it. ‘Camp is playful, anti-serious. More precisely, Camp involves a new, more complex relation to "the serious."’ One can, as Sontag notes, be serious about the frivolous, frivolous about the serious. That Disney’s remains a silly mode of art (amongst his first commercial hits were his ‘Silly Symphonies’) is, as the phrase goes, a feature, not a bug.
Posted by Adam Roberts at 00:11