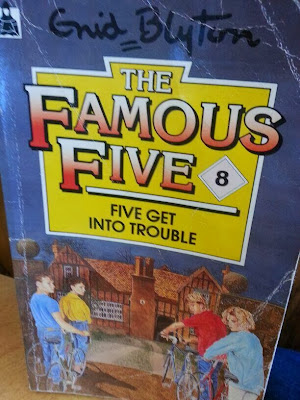 Not having Famous Five #7 to hand (1948's Five Act Camp), I move on to Famous Five #8: Five Get Into Trouble (1949), The One With The Big House On Owl Hill In Which The Five Find Themselves Trapped. Lots of hiding in confined spaces in this one: car boots, tiny secret rooms and so on. I daresay there's an interesting nascent psychosexual thesis to be developed about this; or perhaps all Blyton is doing is playing into to the fun kids can have with hide-and-seek. At any rate, the bad men (including a really ferocious short-fuse violent tempered fellow called Rooky) chase the Five through the house. At the heart of the establishment is a secret room hidden behind a bookcase, in which a criminal is hiding. This chap is an escaped prisoner; and the evil gang at Owl Hill are helping him flee the country in return for a share of the goods he stole. How they're helping him do this by locking him in a tiny hidden room at heart of a lonely old house wasn't immediately clear to me. At the end, on the run from Rooky and his cronies, the Five actually climb into this hidey-hole with the dangerous convict. It's alright though: Timmy keeps him in check. 'If you say another word I'll set my dog on you,' said George [ch. 20]. Remarkable presence of mind for a kid not yet 10; but then again, she is posh. And anyhow, they only need to hide until the police come; which they do promptly. Never knowingly self-undersold, Blyton calls her last chapter 'A VERY EXCITING FINISH!' 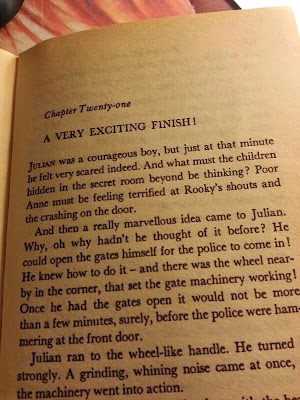 From now on, I propose to adopt this same naming convention for all my novels.

I don't have much to say about the story, which is same old same old. Instead I'll mention the illustrations. The first four books I read had the original pictures; but for this I read the 1968 edition (cover at the top of this post), for which Hodder and Stoughton employed Betty Maxey to update the ilustrations. Here's her rendering of George going into the secret room: 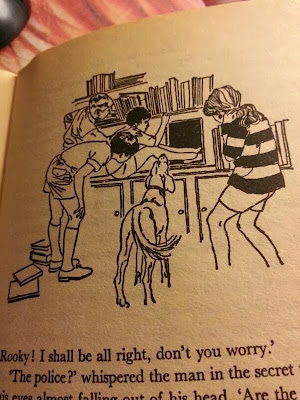 There's a small degree of cognitive dissonance involved in these modern-looking kids having adventures with horses and traps and saying things like 'how queer!', but I quite liked that. Later editions of the books modernise the prose too, which seems to me to do a regrettable degree of violence to the text as a whole. At any rate, I thought there was a pleasing Éric Rohmer vibe to Maxey's pictures. 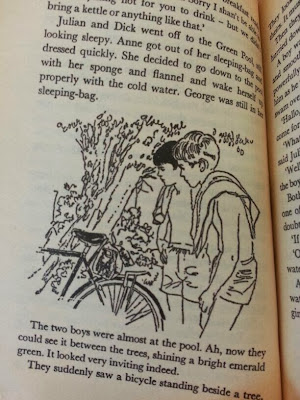 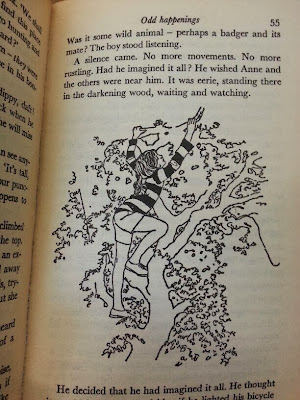 See what I mean? Now a critic with more professional integrity would use this as an opportunity to say relevant and perceptive things about the timelessness of Blyton's characters, the way they do not age (like Peter Pan), or more to the point the way history moves on around their changeless childishness (like Bart Simpson). Not me, though. I'm content merely to score cheap points by re-purposing the illustrations. 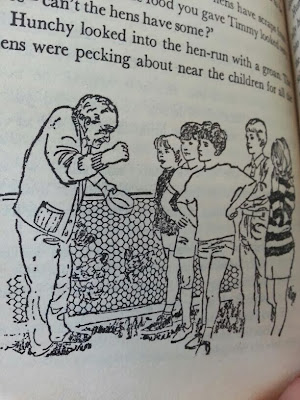 This illustrates a scene in the novel in which an elderly man dances to Robin Thicke's "Blurred Lines" whilst the Famous Five look on. 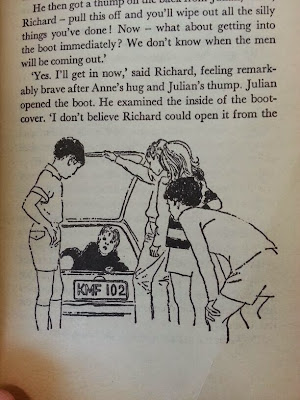 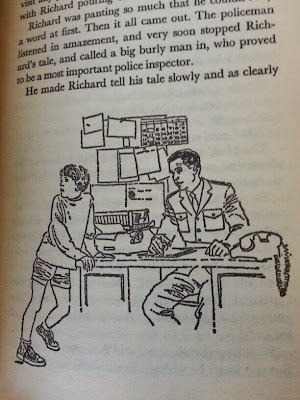 And here, in a development I for one was not expecting, the novel abruptly crosses-over with 1970s Doctor Who, and Richard meets The Brigadier. Exciting stuff!
Posted by Adam Roberts at 09:26