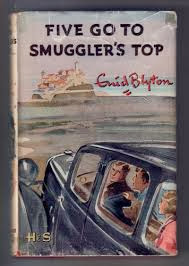 Five vol 4: The One In Which Uncle Quentin Is Kidnapped. A tree falls onto Kirrin Cottage, so Uncle Quentin and Auntie Jane take the kids off to 'Smuggler's Top' (just the one smuggler, then?) to stay with his fellow scientist, Mr Lenoir. That's French, you know. Mr The Black. His house is a more-Gothic-than-usual setting for Blyton. This is what it looks like: 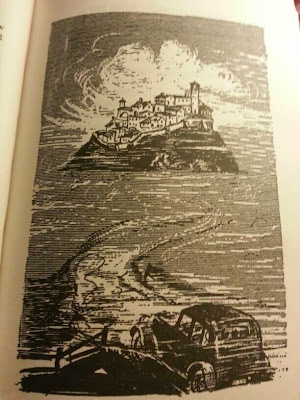 You have to hope that's a James Bond-style Aqua-car, there. Glug. Mr Lenoir's son (a schoolmate of Julian and Dick's) is called Sooty. That's Sooty Lenoir. Most. Ridiculous. Name. EVER. Anyway, there are of course mysterious tunnels under the house, and a mysterious light signal from the house's tower. Uncle Quentin and Sooty go missing; they have, in fact, been kidnapped. The Five investigate. Mr Lenoir has 'cold eyes', and when Anne shakes hands with him she thinks 'his hand was cold too.' When he gets angry the tip of his nose goes white. But the thing that most struck me was how much he looks like Trotsky. 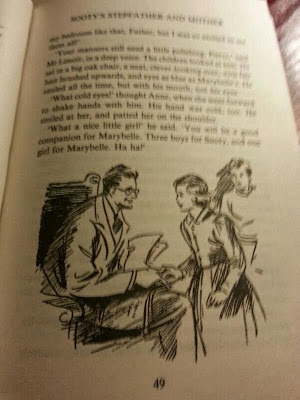 He hates dogs, so Timmy has to be smuggled into the house. There's a sinister butler called Block who is profoundly deaf. In this image Dick and George are scared that, despite his disability, he has overheard Forbidden Timmy barking. Either that or the butler has goosed them both: 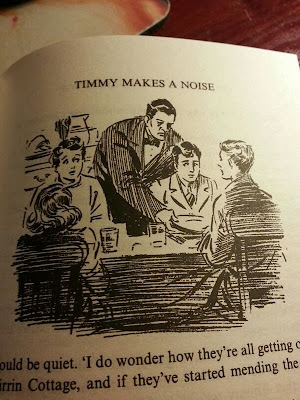 But (spoiler!) it turns out that Block isn't deaf at all. The novel's plot twist is that the Trotskyalike vampire-cold Mr The Black turns out not to be the villain. That role is taken by the unpleasant Mr Barling. It is Barling who has kidnapped Uncle Quentin and young Sooty, and who orders Block to whip the latter:


'Whip him, if you like,' said Mr Barling, sitting down on the box. 'I've no time for rude boys myself.

'I will,' said Block, grimly, and he undid length of rope from around his waist. 'I've often wanted to, cheeky little worm. [ch. 19]

Earlier in the book Block hits Julian hard, 'sending hin half across the landing.' [ch.14] 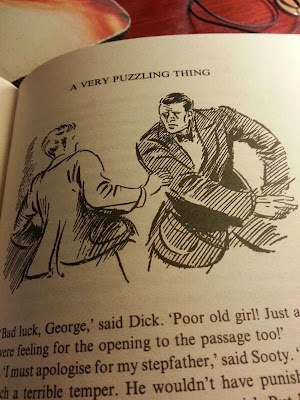 The butler almost looks like he's crying, in that image. The violence does seem to have been ramped-up for this book.

Talking of A Very Puzzling Thing, I remain puzzled as to why Barling kidnapped Quentin in the first place. The reason given in the text is that Quentin came to Smuggler's Top in order to sell to Lenoir a new scientific plan (formula, magic pill, I'm not sure) that would have drained the marshes all around the house. Barling doesn't want this, since it would have a deleterious effect upon his trade, which happens to be smuggling.

"Do you want to drain the marsh, then?" said Uncle Quentin in surprise.

Mr Barling laughed scornfully. "No! Your plans, and the results of all your experiments, will be burnt! They will be mine, but I shall not want to use them. I want the marsh left as it is, secret, covered with mist, and treacherous to all but me and my men! So, my dear sir, you will please name your price to me, instead of to Mr Lenoir, and sign this document, which I have prepared." [ch.20]

This doesn't seem to me very well thought-through. What is Barling planning next? Releasing Quentin (in which case he will go to the police, Barling will be arrested, and Lenoir will get the marsh-draining technology after all)? Keeping Quentin imprisoned for ever, and handling any awkward 'so you got him to sign the plans over to you, I see; and where is he now?' type questions as and when? Killing Quentin? That would make more sense, except that if he's going to that why kidnap him at all? More fundamentally: why try to force the issue in the first place? Why not just outbid Lenoir, and then sit quietly on the plans? And actually: what is it that Barling is smuggling, though? And from where? -- given that this is still wartime, and Europe is still occupied by the Nazis.

I enjoyed this one, mind: better than 3, and with plenty going-on. Still, I rather wish that Blyton had stuck to her original plan, and written only six Famous Five stories. It's beginning to get tiresome.