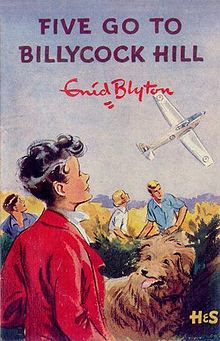 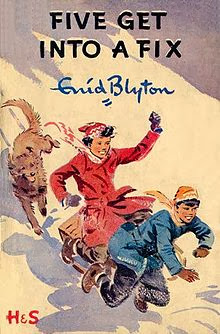 My (I confess it: vague and noncommittal) plan to re-read all twenty-one 'Famous Five' novels seem to have hit the reef of Bored By The Repetitiveness Of It All. You know what? I think I’ve ingested enough of them now to get a sense of the Platonic Form of the Famous Five novel, existing as a scintillant shadow behind the often flat and dull actual texts. The Five are in school but the holidays come (within a few pages); they go off to have fun on holiday (on Kirrin Island, or some other part of the coast, or on a hill, or in the snow). There is a mystery, which the Five solve. The mystery involves smuggling, kidnapping or both. Adults are family, in which case they are distant; or others, in which case they are not to be trusted; or they are actual figures of national authority such as policemen, in which case they will effect the narrative resolution. There is a macguffin. There are tunnels. There are always tunnels.

So, skipping rapidly forward, here’s Five #15 Five On A Secret Trail (1956): Kirrin cottage, Timmy has a hurt ear, there’s an archaeologist. There are tunnels (‘He clambered up and into the hole. He had to crawl on hands and knees for a little way, and then the hole suddenly went downwards and became considerably bigger, Julian could walk in it, if her bent down, for at that point the tunnel was about three feet high’). But the thing that really interested me about Secret Trail is the macguffin. It is, in the first instance, an apparently empty bag. So far, so Absurdist. But then …


He [the Burly Inspector] began to examine the bag very very carefully. Finally he took out a took out a sharp knife and gently slit the lining at the bottom of the bag. He turned it back.

Exciting! So what is it?


George’s father took it up. He ran his eyes over it, and then gave a loud exclamation.

Everyone gazed at him. What did he mean? What could it be, this blue-print?

Yes, yes—go on! I’m on tenterhooks.


“Er, is it important then, sir?” asked the Inspector.

What? WHAT IS IT? [riffles through pages of waffle until ...]


“Father—what is this a blue-print of?” said George, voicing the thoughts of everyone there, the Inspector included.

“This blue-print? I’m certainly not going to tell you!” said her father. “Its too big a thing … It’s one of the biggest secrets we have."

Well, OK, maybe this is a clever narrative sleight-of-hand, like Tarantino never letting the audience know exactly what is in the briefcase in Pulp Fiction. But you know what? It reads to me more like a tired author who can’t be bothered to think up a pretext for her latest formulaic adventure yarn.

In Five Go to Billycock Hill (1957) Blyton at least identifies the macguffin—it’s a secret new design of RAF jet. The Fivean shenanigans in this one almost approach spy-adventure excitement. Not that you'd guess that, from the 1970s paperback cover reproduced below, which rather implies the novel is about Julian trying out a Rod-Hull-And-Emu inspired ventriloquist act, except with a Pig rather than an Emu (‘Julian and Swiney! Watch the pig condescend to working-class people whilst Julian drinks a glass of ginger beer, in ... FIVE GO TO GILLYGOCK GILL!') 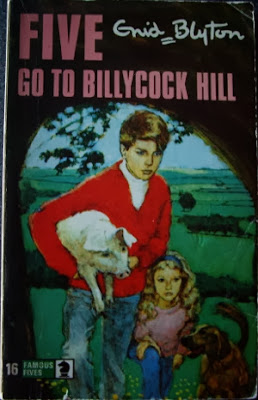 He's pulling that face because he's concentrating really hard. Or because he's been consumed by an ancient and unspeakable evil. One of the two.

Then there’s Five #17, Five Get Into A Fix (1958). This one is a Christmas hols adventure, with lots of tobogganing and ski-ing, and so on. There are strange vibrations coming from the spooky old house called Old Towers on the top of Owl Hill, and naturally the Five investigate. They pick up a note dropped out of one of its windows: “I’m kidnapped in my own house. Please call the police”—so it’s another kidnapping one. And tunnels, too, of course: ‘“Yes—it’s a pot-hole. There’s a small underground cave here. Look—is that a tunnel leading out from it?” … “Come on, Timmy,” said George, and all Five went down the dark, winding little tunnel.’ [ch. 18]. They discover the house’s owner, an old woman called Mrs Thomas, held prisoner. Why?


“Men wanted to buy my house. But I wouldn’t sell it, no. Do you know what they said to me? They said that in this hill, far, far below my house, was a rare metal—a powerful metal—worth a fortune. What did they call it now?”

She looked at the children, as if expecting them to know. She shook her head as they didn’t answer.

“Why should you know about it—you are only children. But I wouldn’t sell my house—nor the metal below. Do you know what they wanted it for? For bombs to kill people with! And I said NO, never will I sell this place so that men can dig the metal and make bombs. It is against the law of God, I said, and I, Bronwen Thomas, will not do such a thing.”

Right now ‘they are at work below.' “I hear the noises creeping up, and I feel my house shake,” says Bronwen. So, wait, is this Uranium? That’s quite hard core for an Enid Blyton story—Hiroshima as a kids’ adventure macguffin.

Does Blyton think uranium lies in gleaming seams to be picked straight out? Not so. In fact Uranium is processed from ore, and very large quantities of ore must be mined and refined to produce very small amounts of uranium: low to medium grade ore might contain from 0.05 to 0.4% U3O8. Even in the rarer vein deposits of the metal, the so-called pitchblende ore, the overall grade is only about 0.1% uranium. Processing this would take acres, devastate the landscape, and involve many toxic and acidic by-products. But it would be unlikely to get this far, since mining uranium ore underground would expose the villains to fatal levels of radon gas. The problem is self-solving.

How do I know so much about uranium processing, you ask? Why, because I am a Bond Villain! A Bond Villain with access to Wikipedia. ‘Do you expect me to talk?’ ‘No, Mrs Bron (Wen Thomas), I expect you to die!’
Posted by Adam Roberts at 13:00