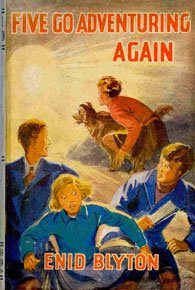 If you'll pardon an excessively numerical opening sentence, this is the second Five of twenty-one. We start with the pals/relatives in school (the by no means sniggerworthily-named 'Gaylands' school), looking forward to spending Christmas at Kirrin Cottage. But when they get there they discover that George's parents have engaged a private tutor to teach them over the holidays. Boo! This turns out to be a tall, well-dressed, gentlemanly figure with a beard 'like a sailor'. He is strict but fair with the kids, and Julian, Dick and Anne immediately warm to him. But Timmy the dog takes against him from the first, and when he is beastly to the dog and refuses to call George anything but 'Georgina', George takes against him as well. 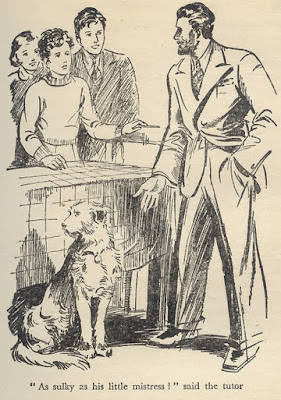 Look at him there! Playing pocket-billiards whilst the dog pointedly 'cuts' him. Can't trust a man with a beard, see. And there's worse: he has 'thin, cruel-looking lips'. You may assume this is nothing more than an arbitrary variation in human physiognomy. You're wrong! Everybody is born with full, plump lips; evil people's evil withers the lips from the inside.

Of course George is right to mistrust him. He is in cahoots with the two men claiming to be artists, staying at Kirrin Farmhouse not far from the cottage. These three are conspiring to steal the new formula just concocted by George's Dad, Uncle Quentin (a 'brilliant scientist', apparently; although why a brilliant scientist would choose to work in a remote farmhouse in the middle of nowhere, rather than in a university city with access to laboratories, colleagues, research books and papers etc. etc. is never vouchsafed to us). Then the tutor-wallah Mr Rowland actually does steal the formula. George follows him and sees him handing it over to the artists, nobody believes her! We're not told what the formula entails. It being wartime, I suppose I assume it has a military significance, which in turn must imply the three men are Nazi-sympathisers or something. But that's not territory about which the novel is explicit.

Anyway, the five discover an old map with some Latin on it: 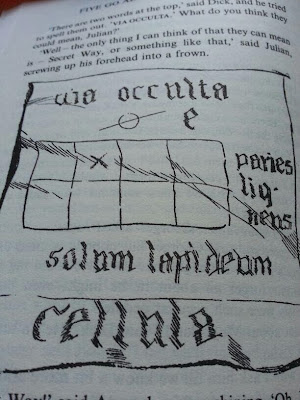 'VIA OCCULTA' means 'HIDDEN WAY'. I did wonder if Blyton was quoting this from Tertullian's account of the secretive practices of early Christians in Rome: "liceat veritati vel occulta via tacitarum literarum ad aures vestras pervenire'; 'Let the truth only be allowed to reach you via your ears or the hidden path of silent writing'. But then I thought: what, Adam, are you high? Of course it has nothing to do with Tertullian. At any rate, the Five discover a secret tunnel connecting the cottage and farmhouse. There's some exciting running up and down this passageway, the darkness banished by Julian's Magic Globe of Improbable Brightness. 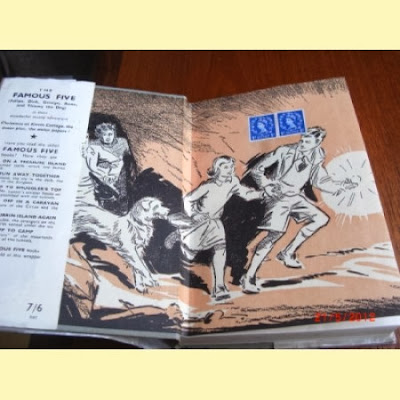 The villains are prevented from spiriting the formula away because the cottage is snowed-in, and nobody can go anywhere. The five retrieve it, convince Uncle Quentin and Auntie don't-laugh Fanny of the wickedness of the tutor, and the police come and arrest the three of them. The police can do this, because they have skis. It's things like this that indicate the fundamental moral superiority of the humble English bobby.

As with the first Five, this is a brisk, enjoyable read; shallow and narrow but clear and, of its type, formally speaking, clean. The moral is: don't trust strangers, even ones your parents have vetted. There's a quantity of stuff about having fun in the snow, about Christmas and its presents, and there's also the sentence 'then she rubbed the dog's hairy chest with the oil', which may be my single favourite sentence Enid Blyton ever wrote.