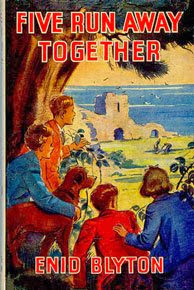 Getting into the flow of reading these Famous Five novellas, you start to understand: they are of course all the same story. The familiar characters get together, have an 'adventure' involving exploring hidden ways and overcoming a particular adversity, with each new book giving a single point of novelty to the format. The naming convention of the old Friends TV show gets it right: 'The One About The ...' We want the characters we love acting in character, and giving us what we come to the text for (laughter and sentiment in the case of Friends; adventure and in-group bonding in the case of Five) with the minimum possible amount of variety that is compatible with staving off absolute monotony. So Five on a Treasure Island is The One About The Upthrown Shipwreck And The Gold Ingots; Five Go Adventuring Again is The One In Which They Get Snowed In; and Five Run Away Together is The One About the Sticks.

What that actually means is: it's the one about the naked class antagonism. The Five are back at Kirrin Cottage, but Aunt don't-snigger Fanny is too ill to look after them—so ill, in fact, that she has to be taken away to a distant hospital. Ill with what? We're not told. At any rate, the kids are left in the care of the cook/housekeeper Mrs Stick, She has a rude son, Edgar, who mocks George by singing 'Georgie Porgie' over and over; and a dirty little dog called Tinker, whom the kids call Stinker. Then Mr Stick comes to live in the cottage, apparently on leave from his ship. I was never sure whether he was actually on leave from the RN, or if he was AWOL. But that's not the important thing. The crucial thing is that all the Sticks are nasty lower-class types. Here's Julian's first encounter with Mr Stick.


A small man, lying on the sofa. He was fast asleep, his mouth wide open. He was not a very pleasant sight. He had not shaved for some days and his cheeks and chin were bluish-black. He didn't seem to have washed for longer than that, for his hands were black, and so were his fingernails. He had untidy hair and a nose exactly like Edgar's. [ch. 5]

The novel is so secure in its belief we will identify with the upper-middle-class Five and feel revulsion at the lower-class Sticks that it runs through a series of quite extraordinary episodes. Edgar is rude, true; but the Five bully him mercilessly: they spray him with cold water, George slaps him; Julian pulls his nose ('I pulled old Edgar's nose nearly off his face!' he tells the others, with satisfaction). If we laugh, then I suppose this is comic; but if we don't it becomes really nasty. Julian's first reaction on seeing Father Stick, with his dropped aitches and ferrety manner, is to threaten to push a meat pie into his face ('he raised his arms and Mr Stick ducked'). Mrs Stick retaliates by refusing to feed them. After Timmy bites the Sticks' dog Tinker ('Timothy had him by the neck and was shaking him like a rat') Mrs Stick tries to poison him. It is, in effect, open war.

The consequence is the titular run-away: the Five stock up on supplies and take George's new boat over to Kirrin Island with the intention of subsisting there until Uncle Q. and Aunt F return, thus having nothing more to do with the Sticks. What actually happens is they discover a kidnapped and imprisoned young girl. When the Five free her and take her to the police station the inspector declares 'Bless me! Here's the child the whole country is looking for!' It transpires the Sticks (of course) are behind a nefarious plot to ransom the child for £100,000. Naturally this validates all the earlier horrible behaviour meted out to the Sticks.

But, golly, how unashamedly de-haut-en-bas that behaviour is! Here, from the early chapter actually called 'Julian Defeats the Sticks', is a sample. Julian tells the Sticks that the Five are going on a picnic:


"Good riddance to bad rubbish," murmured Edgar to himself. He was lying sprawled on the sofa, reading some kind of highly-coloured comic.

"If you've anything to say to me, Edgar, come outside and say it," said Julian, dangerously.

"You leave Edgar alone," said Mrs Stick, at once.

"There's nothing I should like better," said Julian, scornfully. "Who wants to be with him? Cowardly little spotty-face!"

"I don't want to look at you," said Julian at once.

"No, no insolence—just the plain truth," said Julian, airily. Mrs Stick glared at him. Julian defeated her. He had such a ready tongue, and he said everything so politely. The ruder his words were, the more politely he spoke. Mrs Stick didn't understand people like Julian. [ch. 6]

I suppose the point here is that a great many 19th- and 20th-C children's stories interpellate their readers as posher than many of them actually were. The obvious point of comparison is Harry Potter and the Dursleys. Now the Dursleys are of course have money; but what they don't have is class. The point of the scenario is that they treat Harry abominably because they recognise that he is, in some way, better than them; and certainly better than their horrible son Dudley.

The Dursleys, I think, point to a crucial ideological blind-spot in the Harry Potter books. Rowling makes a great deal of play in her writing with the evils of racism; the way 'muggle' is a term of abuse, the quasi-Nazi regime the Ministry of Magic runs on the reappearance of Voldemort. But if the books are 'good' on race, they are bad on class. From that moment in Philosopher's Stone when young Harry is taken out of a horrid secondary modern school and whisked away not just to an ancient Public school, but the most exclusive and marvellous school in the world, the books never shake off a rather Blytonesque sense that class hierarchies reflect some natural justice in the world. 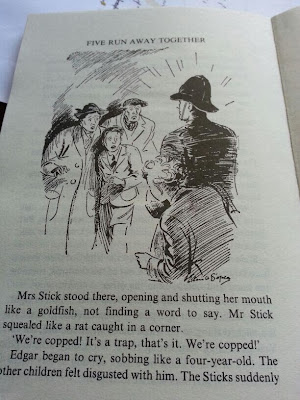 In this illustration, the Sticks are finally arrested for the wicked crime of being lower class and dropping their 'h's. Notice the angelic halo around the policeman's helmet.
Posted by Adam Roberts at 00:01