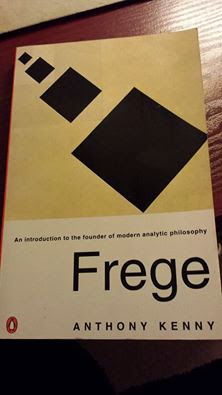 I've been trying to get a sense of Frege's critique of Kant's transcendental inductions by reading Anthony Kenny's book, which, had it been me, I'd have called Frege, Frege Against The Dying Of The Light.* The point of this post, though, is not puns; it's to notate a few thoughts and objections that occurred to me. Since these are second-hand, thoughts on Kenny's summary of Frege, I'll need at some point to go to the source if I ever want to firm them up. But this's close enough for government work for now (I'm sure Frege scholars have rehearsed all these points many times, and it's very possible I'm being boneheaded and myopic in my criticism. Let that stand for now).

1. So: Frege denies that numbers 'refer' to actual objects in the world; or rather (since number obviously do this: 'two dogs', 'three bananas') he wants to deny that this is all there is to numbers. Logic and arithmetic, he says, are realms of a priori truth. In The Foundation of Arithmetic, he insists that 'nobody can give a coherent answer to the question of what the number one is, or what the numeral "one" signifies.' To bring this out he imagines the following dialogue' [K, 50]

My objection here is the one I presume (I don't know) critics of Frege have already made: that there is semantic slippage away from 'replace "1" with any item I like' and towards 'replace "1" with a singular, non-additive object of my choice'. We could summarise this as the veiled shift from 'a' thing to 'the' thing. If cheeky little 'A' had decided to replace 1 with 'a' moon, there would be no problem. To spell this out, let's imagine that numbers refer not to 'the' thing but to accumulations of 'a' thing (apples, dogs, moons). A moon plus a moon equals two moons -- for instance, in orbit around Mars. This is clear enough, even in Kenny's summary: 'if we put "the Moon" in place of "1" both times, we seem to produce a falsehood: there is only one Moon circling the earth, not two. On the other hand, if we put something else in the second place, say "the Sun", we are doing exactly what we would not be allowed to do in B's parallel case. The algebraic formula expresses a truth only if we always substitute the same numeral for the same letter.' But this isn't right ('only' isn't right, I mean). It makes more sense to treat this shift from number to thing as following a particular grammar. So let's substitute the Moon for the first "1" and the Sun for the second. We get:

We're only puzzled because we haven't grasped the way plural forms inflect expression. So to preserve the 'truth' Frege thinks so paramount, we need only complete the 'sum':

Frege's unhappiness here is akin to the man who says 'one goose plus one goose equals two gooses, but gooses is not correct English usage, so there can only be one goose!' on account of not knowing that the plural for goose is geese.

2. What else? Well, Frege adapts Kant's distinctions between a priori and a posteriori, synthetic and analytic. There's some interesting stuff in Kenny here, not least this:


Frege allied himself with Kant in stating that the truths of geometry are synthetic and a priori. Geometry is a priori because geometrical theorems are provable from general laws (for example, from the axioms of Euclid) and make no appeal to any particular lines, figures or solid. Bodies. But geometry is not analytic, because its axioms involve spatial concepts; and these concepts are not applicable in all disciplines, since not everything we can think about is spatial. As non-Euclidian geometries show, some of the geometrical axioms can be denied without self-contradiction. [58]

So: a triangle may have straight edges and still not sum its angles to 180-degrees is it is drawn between two points on the equator and the north pole of our globe. Fair enough.

and infinitely many other similar sums be reduced to a handful of self-evident truths?

That first sum is there because Kant cites it in the Critique of Pure Reason: he says there's nothing 'in' 7 or 5 that can logically lead us to 12; that the fact that we know 7 + 5 = 12 is an intuition. To this Kenny (ventriloquizing Frege) makes the following interesting comment:


Kant claims each arithmetical proposition is known by intuition. In adding together 7 and 5, he says, we 'call to our aid the intuition corresponding to one of them, say our five fingers' ... But do we really have an intuition of 37863 fingers? Or of 135664 fingers? And if we did, would not the value of 135664 + 37863 be immediately obvious without needing to be worked out? Perhaps Kant meant his thesis to apply only to small numbers. But even in the case of ten fingers, many different images come to mind, depending on the positioning of the fingers. And how can we make a fundamental distinction between small and large numbers? [K.60]


Everything that is thinkable is also countable ...

as if my love for my kids, my aesthetic appreciation of King Lear or Quadrophenia, or the dread in the pit of my stomach that afflicts me as I try to fall asleep and which relates to my increasing sense of existential confinement ... as if these things are all countable. As for the 'laws of numbers', though Frege doesn't admit it, these are predicated on the Wittgensteinian language-game context, the getting behind of which there is none, and the which determines that '7 + 5 = 10' is perfectly true in base-12.

4. We lumber on. Frege insists that number is 'not a property', and he has this to say on the 'difference between numbers and properties such as colour'.

Well now I have to assume he's just taking the piss. Because we can (of course) and do (often) talk of a blue object as 'the colour of my lover's eyes', or as 'sea-blue', or as 'dark (as opposed to light)', as 'Chelsea kit', as 'true blue' and so on.


We should then have it might be many millions of twos in our hands. We should have to speak of my two and your two, of one two and all twos ... as new generations of children grew up, new generations of twos would continually be being born, and in the course of millennia these might evolve, for all we could tell, to such a pitch that two of them wold make five.

This is a restatement of Kant's Transcendental Unity of Apperception, concerning which I have expressed my doubts in another place. Saying 'my mental images are not your mental images, and your mental images are not mine' ignores the myriad way that my mental images can copy themselves into your head, by me telling you about them. William Blake had a mental image privately in his head of a sick rose, in which the invisible worm that flies in the night in the howling storm has made its bed. He writes the image into his poem. Now it is in the heads of millions of readers. It continues to be duplicated into millions more, and yet in none of them does the Frege reduction absurdum come to pass, such that the sick rose evolves into a sick tulip, sick iPhone or sick Ford Mondeo. Funny, that.