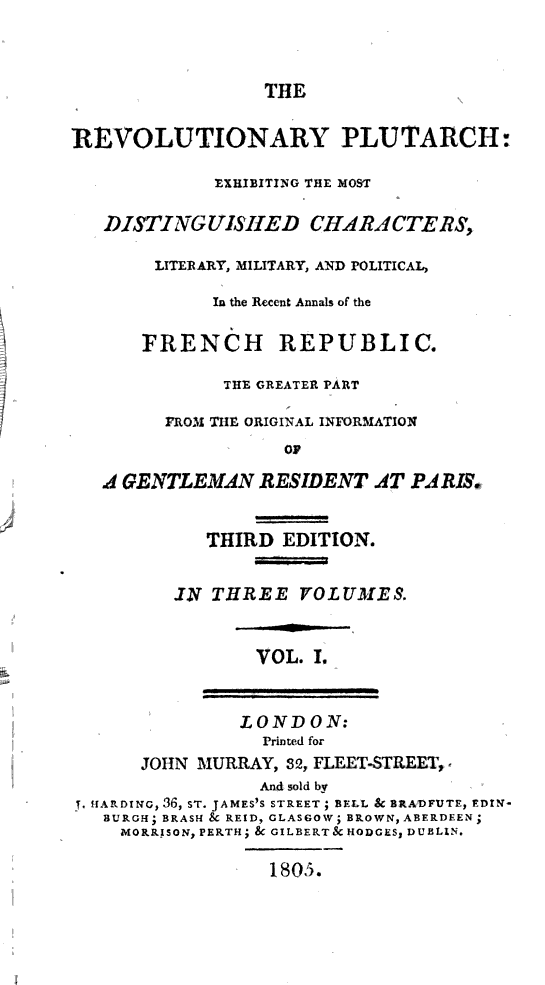 Dedicated (a touch hauntologically) to the ghosts of Louis XVI and Edmund Burke, the preface to this collection of French capsule biographies leaves us no doubt as to its ideological orientation:

The Corsican adventurer continues, almost daily to inflict new, deep, and almost incurable wounds on the civil rights of individuals, on the prerogatives of sovereigns, as well as on that system of public morals called the law of nations. He, therefore, who is destined to relate the present wretchedness of society, if actuated by the spirit of truth, honour, and independence, will have to recapitulate such a multitude of enormities, that the reigns of Nero, Caligula, Domitian, and Robespierre must appear less intolerable and less tyrannical than the usurpation of Napoleone Buonaparte. Slavery, in its most odious hue, as well as in its gloomy shades, continues still to degrade most of the continental nations; but though outraged nature, ever intent to uphold her dominion, constantly haunts the offender, by means of the demon of never-ceasing suspicion, and not unfrequently torments him with the scorpion of never-dying revenge, no prospect is visible of modern bondsmen possessing courage and energy enough to break their chains on the head of their guilty and cruel master.

I like the spelling 'Napoleone Buonaparte' used here; a nice rocking-horse rhythm to the name: Na-POLE-ee-oh-nee Bu-OHN-ah-par-tee. A shame it didn't catch on, really. (It goes on in this Gothic mode: "Backed by accomplices, by gaolers, dungeons, racks, executioners, and gibbets, Buonaparte with one hand tears the social compact of civilized people, and with the other seizes a privileged British agent! with one hand he stabs a Bourbon, and with the other drags a trembling pontiff sacrilegiously to place the crown of the Bourbons on the head of their assassin!")