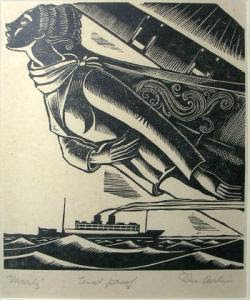 The first of a short series of posts looking at Harold's songs: that is to say, the songs inset in Byron's first great popular success, Childe Harold's Pilgrimage (1812-18), his 'I awoke one morning and found myself famous' poem. The narrative through-line of the whole thing is not complex: in onrolling Spenserian stanzas we follow the travels of Harold, a version of Byron himself, through a Europe scarred by the Napoleonic wars. Our hero has dissipated himself and scandalised England with his rakish behaviour, and so he leaves for the Continent, starting in Canto 1 (1812) with the Iberian peninsular. But before we get to Spain, we get the poem's first lyric insertion, 'Adieu, adieu! my native shore':

A few short hours, and he will rise
To give the morrow birth;
And I shall hail the main and skies,
But not my mother earth.
Deserted is my own good hall,
Its hearth is desolate;
Wild weeds are gathering on the wall,
My dog howls at the gate.

'Come hither, hither, my little page:
Why dost thou weep and wail?
Or dost thou dread the billow's rage,
Or tremble at the gale?
But dash the tear-drop from thine eye,
Our ship is swift and strong;
Our fleetest falcon scarce can fly
More merrily along.'

'Let winds be shrill, let waves roll high,
I fear not wave nor wind;
Yet marvel not, Sir Childe, that I
Am sorrowful in mind;
For I have from my father gone,
A mother whom I love,
And have no friend, save these alone,
But thee—and One above.

'My father blessed me fervently,
Yet did not much complain;
But sorely will my mother sigh
Till I come back again.'—
'Enough, enough, my little lad!
Such tears become thine eye;
If I thy guileless bosom had,
Mine own would not be dry.

'Come hither, hither, my staunch yeoman,
Why dost thou look so pale?
Or dost thou dread a French foeman,
Or shiver at the gale?'—
'Deem'st thou I tremble for my life?
Sir Childe, I'm not so weak;
But thinking on an absent wife
Will blanch a faithful cheek.

'My spouse and boys dwell near thy hall,
Along the bordering lake;
And when they on their father call,
What answer shall she make?'—
'Enough, enough, my yeoman good,
Thy grief let none gainsay;
But I, who am of lighter mood,
Will laugh to flee away.'

For who would trust the seeming sighs
Of wife or paramour?
Fresh feeres will dry the bright blue eyes
We late saw streaming o'er. For pleasures past I do not grieve,
Nor perils gathering near;
My greatest grief is that I leave
No thing that claims a tear.

And now I'm in the world alone,
Upon the wide, wide sea;
But why should I for others groan,
When none will sigh for me?
Perchance my dog will whine in vain
Till fed by stranger hands;
But long ere I come back again
He'd tear me where he stands.

With thee, my bark, I'll swiftly go
Athwart the foaming brine;
Nor care what land thou bear'st me to,
So not again to mine.
Welcome, welcome, ye dark blue waves!
And when you fail my sight,
Welcome, ye deserts, and ye caves!
My Native Land—Good Night!

This is a poem about, to deploy a modern idiom, 'The Feels'. More specifically it is about two different sorts of elegaic melancholy, set artfully in juxtaposition. On the one hand is the Childe's page, who is weeping and wailing because he's missing his Mum and Dad, and is 'thinking on an absent wife':


'My spouse and boys dwell near thy hall,
Along the bordering lake;
And when they on their father call,
What answer shall she make?'

This is a clear enough reason to be sad. The Childe himself, though, is experiencing the same sadness (he explicitly says that, if he were a little more guileless, he'd be weeping along with the lad) for diametrically opposite reasons: he is leaving nobody behind because nobody in his native land loves him. What makes this more complicated and interesting than mere emo self-pity—what makes it, that is, more classically Byronic—is the way the poem simultaneously laments and celebrates the existential vertigo of this state of affairs. Sure it's sad. But it's cool, too.


And now I'm in the world alone,
Upon the wide, wide sea;
But why should I for others groan,
When none will sigh for me?
Perchance my dog will whine in vain
Till fed by stranger hands;
But long ere I come back again
He'd tear me where he stands.

The dog is supposed to make us think of Odysseus's dog Argos, who joyfully recognised his master even though the wandering Greek had been away two decades and returned in a divinely-appointed disguise. The Childe's hound will not be so faithful. Incidentally, the only non-monosyllabic words in that stanza are the three that relate either to people other than the speaker ('others', 'stranger') or else to the possibility of otherness ('Perchance'); the whole of the rest of the stanza is paced out in words as monosyllabically singular and solitary as the Childe.

I suppose a poem like this works, or doesn't, on the level of affective reaction. I mean it twangs your heartstrings, or else it doesn't. Evidently many people have experienced the former reaction, and the vibe of this lyric, projected across the whole of Childe Harold, contributed largely to its success. For myself, if this poem happens to leave my eyes dry, that may be because I prefer my Byronic moody-magnificent existential drama leavened with a little comedy, as in Don Juan. But then it may be that there's just something about this poem. The poeticisms ('Athwart the foaming brine' and so on) strike me as jarring rather than embellishing moments, and there's ... something ... not a good something ... about the assonance. Look at the stanzas that top and tail the whole, where the Native Land—Good Night!' lines, capitalised and exclamation-marked to emphasize its pathos, is repeated.

I'm not sure what to do with that opening 'Adieu, adieu!' If we English readers pronounce it as 'adyeur' it comes dangerously close to half-rhyme tangling with the line-ending 'shore' and so tripping the poem up before it's even got started ('adyeur my native shyeur', as Inspector Clouseau might say). But if we read it as 'adyoo' then it picks up the 'blue' at the end of line 2 to similar effect. Maybe I'm being too picky. Or maybe I'm missing the point. Perhaps this slightly nebulous word, queasily uncertain of pronounciation in its alienated textual environment, is exactly what Byron is going for. It's a poem about leaving one place and going somewhere very different, although not very particular ('deserts' and 'caves' are mentioned, but that's it). To start such a poem with a French connective of direction, à Dieu, 'towards' God, chimes ironically with this broader logic, since one thing our Childe is not doing, for all that his travels are styled a 'pilgrimage', is moving towards holiness and divinity.

If I wanted to expand this discussion, I'd probably pick up the thread from Paul Elledge's influential essay 'Chasms in Connections: Byron Ending (in) Childe Harold's Pilgrimage 1 and 2', [ELH 62:1 (1995), 121-148 ], which identifies a recurring thematic of termination and bereavement at play in the first two parts of Byron's work:


Two years and twelve days after departing England for his continental tour, Lord Byron landed at Sheerness on 14 July 1811 bearing the manuscript about to rocket him into international fame. It tracks the months of recurrent dislocation intrinsic to a pilgrimage that enacted the chronic discontinuity of the poet's affinitive history. Just over one-hundred lines into the new poem, a valedictory lyric by the voyaging pilgrim sings a simulated indifference to his desertion of family and friends, and foresees as his destination the desolated terrain to which in fact its author returned. This essay explores Byron's response to the devastation he in disembarking met, principally as textualized in stanzas added to Childe Harold's Pilgrimage 1 and 2 in August and October 1811. But these supplements, partially driven by the deaths of the friends they covertly honor—John Wingfield in 1 and John Edleston in 2—also materialize the poet's apprehensions about reengaging a readership after his recklessly undiscriminating English Bards and Scotch Reviewers had jarred and piqued the British literary establishment in 1809. The stanzas in question encrypt anxieties aroused by gaps in Byron's personal landscape and inflamed by the imminence of a gap between poet and manuscript—by the rift created with his abandonment of the Childe to an uncertain audience. My subject, broadly, is Byron ending: suffering, evading, disguising, denying, performing, and surviving terminations; ending relationships, poems, relationships with poems and their audiences; designing structures to accommodate and facilitate the dissociative imperative that determines so much of his verse as it disabled so many of his connections. More particularly, I look at the complementary coincidence of fateful human with necessary authorial separation in Byron's elaborated conclusions to his cantos, whereby he converts a psychic deficiency into a textual strength that ministers to the anxieties it inscribes. Among these, ruptures not of his making actuate a Pilgrimage discourse that nevertheless exploits them in the vexatious task of textual termination.

But ain't nobody got time for that. On to the next lyric.
Posted by Adam Roberts at 01:44