Christine Ferguson's 'Reading With the Occultists' 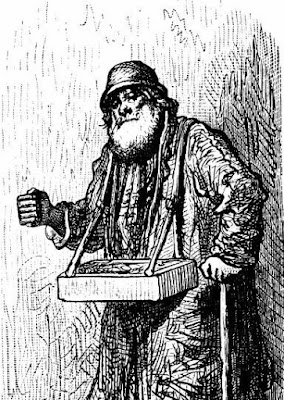 A wonderful article from Christine Ferguson in the most recent Journal of Victorian Studies on 'Arthur Machen, A. E. Waite, and the Ecstasies of Popular Fiction'. The whole thing is well worth reading: here's the opening.


In his 1897 article ‘Pickwickiana’, the Dickensian aficionado Percy Fitzgerald tells a story, perhaps apocryphal, about the ecstatic potential of popular fiction when released into the public sphere. Sometime in the late 1830s, it seems, a wealthy London patron decided to bestow a Braille copy of key scenes from Pickwick on a blind beggar that he passed on the street every day. His beneficiary’s previous pitch had been to recite biblical passages in a serious, monotone voice, but it didn’t draw much trade; as Fitzgerald notes, ‘nobody was improved by the lecture. They merely wonder at the phenomenon and go on their way’. The Braille Pickwick, however, was to change the beggar’s fortunes dramatically:


When [the patron] arrived on the morning fixed for the first attempt he found his friend at his post with almost a crowd gathered round him, in convulsions of laughter. The ‘poor blind’ was reading, or feeling out, old Mr Weller’s ejectment of the red-nosed man. The hat was overflowing with coppers and even silver […] ‘Pickwick’ was a magnificent success, and the blind man was never without a crowd round him of some fifteen to fifty persons! […] [T]he other blind readers found the demand for the sacred text vanishing; and people would actually interrupt them to inquire the way to the ‘Pickwick man’. Eventually, the police began to interfere, and required him to ‘move on’.

Picture the scene: a blind seer channels words through his fingers using a still new, seemingly magical, reading technique; a secular text replaces and supersedes the appeal of religious scripture; and disengaged urban walkers temporarily come together in a gleeful, ribald union that threatens the orderly flow of the city’s thoroughfares. In these coordinates, the anecdote suggests how the Victorian encounter with popular fiction could fuel a form of joyous communion no longer accessible, if it ever was, through sacred texts. This potential forms the basis of a fascinating mode of late Victorian popular fiction criticism, one that has been completely omitted from established historiographies of the critical sub-discipline’s emergence and development. Centred around Pickwick and on other, less canonical and more ephemeral, types of popular periodical romance, what I will here describe as occultic popular fiction criticism had its origins in the late Victorian occult revival, specifically in the writing of two of its central participants: Welsh writer Arthur Machen and his lifelong friend, the English mystic, occult historian, and self-described bibliomaniac Arthur Edward Waite. This occluded episode in the history of popular fiction studies is worth reclaiming, not simply out of antiquarian interest or an unreflexive attachment to recovery work, but also for its value in challenging the anxiety thesis, the hermeneutic paradigm that has dominated Victorian popular fiction studies since the early nineties and still shows few signs of abating despite recent neo-formalist and material culture turns.