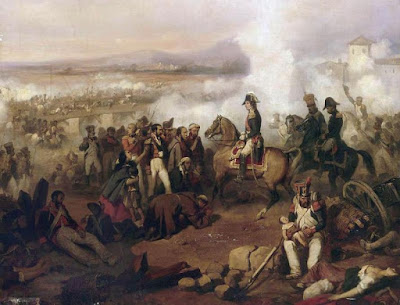 Following on. In the first part of Childe Harold's Pilgrimage, Harold arrives in Portugal and travels on into Spain. The poem is set after the Convention of Cintra (which treaty Byron considers a shameful accommodation: 'Britannia sickens, Cintra, at thy name'), and quite a lot of this portion of the poem is about the battles, the glory and the loss of life of the then-ongoing Peninsular War. Actually, there's a weird flipabout of mood in the first Canto here, perhaps designed to reflect the cycloptropic personality the poem is establishing. Or perhaps just muddle. So, after expressing disdain for the slavish and cowardly Portuguese ('the Lusian slave, the lowest of the low' 33), Byron crosses the border into Spain. Once there he engages in some lively martial exhortation:


Awake, ye sons of Spain! awake! advance
Lo! Chivalry, your ancient goddess, cries,
But wields not, as of old, her thirsty lance,
Nor shakes her crimson plumage in the skies:
Now on the smoke of blazing bolts she flies,
And speaks in thunder through yon engine's roar!
In every peal she calls—'Awake! arise!'
Say, is her voice more feeble than of yore,
When her war-song was heard on Andalusia's shore? [37]

It goes on like this for a while: war is glory and chivalry and the bulwark separating honest manly resistance from tyranny and the cowering servility. Then there's an account of the battle of Talavera (July 1809), where 'Three gaudy standards flout the pale blue skies/The shouts are France, Spain, Albion, Victory!' [41]. But then, on a sixpence the mood of the poem swings about: from praising war as about glory and chivalry the narrator now takes a cynically Falstaffian line:


There shall they rot—Ambition's honoured fools!
Yes, Honour decks the turf that wraps their clay!
Vain Sophistry! in these behold the tools,
The broken tools, that tyrants cast away
By myriads, when they dare to pave their way
With human hearts—to what?—a dream alone. [42]

A couple more stanzas like this follow. Barely giving his reader time to respond 'but weren't you just saying...?' Byron then turns from Violence ('Enough of Battle's minions!' 44) to Sex ('And young-eyed Lewdness walks her midnight rounds' 46) as Harold comes to seductive Seville. There's a brief excursus on how Spanish females do not shrink from fighting in the war, always keeping in view that doing so in no way diminishes their fundamental hotness and desirability: 'Yet are Spain's maids no race of Amazons,/But formed for all the witching arts of love' [57]. There's a statement of erotic-aesthetic preference:


how much
Hath Phoebus wooed in vain to spoil her cheek
Which glows yet smoother from his amorous clutch!
Who round the North for paler dames would seek?
How poor their forms appear? how languid, wan, and weak! [189]

Byron prefers darker women to paler, fair enough. Then he specifically urges his own poem to, as it were, heat itself up:


Match me, ye climes! which poets love to laud;
Match me, ye harems! of the land where now
I strike my strain, far distant, to applaud
Beauties that even a cynic must avow!
Match me those houris, whom ye scarce allow
To taste the gale lest Love should ride the wind,
With Spain's dark-glancing daughters—deign to know,
There your wise Prophet's paradise we find,
His black-eyed maids of Heaven, angelically kind. [59]

There's some Seville-based tourist moments: a colourful Sunday, a matador. But the real theme of the poem has been intimated: Spanish women are hot, like the climate, and the poem seeks to emulate that hotness. Which brings us to Harold's second lyric, addressed 'To Inez': 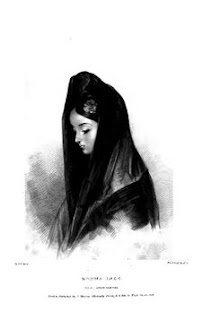 Nay, smile not at my sullen brow,
Alas! I cannot smile again:
Yet Heaven avert that ever thou
Shouldst weep, and haply weep in vain.

And dost thou ask what secret woe
I bear, corroding joy and youth?
And wilt thou vainly seek to know
A pang even thou must fail to soothe?

It is not love, it is not hate,
Nor low Ambition's honours lost,
That bids me loathe my present state,
And fly from all I prized the most:

It is that weariness which springs
From all I meet, or hear, or see:
To me no pleasure Beauty brings;
Thine eyes have scarce a charm for me.

It is that settled, ceaseless gloom
The fabled Hebrew wanderer bore,
That will not look beyond the tomb,
But cannot hope for rest before.

What exile from himself can flee?
To zones, though more and more remote,
Still, still pursues, where'er I be,
The blight of life—the demon Thought.

Yet others rapt in pleasure seem,
And taste of all that I forsake:
Oh! may they still of transport dream,
And ne'er, at least like me, awake!

Through many a clime 'tis mine to go,
With many a retrospection curst;
And all my solace is to know,
Whate'er betides, I've known the worst.

What is that worst? Nay, do not ask—
In pity from the search forbear:
Smile on—nor venture to unmask
Man's heart, and view the hell that's there.

The first thing to say about this poem is that it functions as seduction not despite but because of its denials of desire, its classic-Byronic 'see how moody and sad and isolated I am' vibe. Telling beautiful Inez that her charms have no effect upon him is a version of that creepily standard pick-up artist approach; though I suppose we have to assume that when you're as handsome and well-dressed and famous as Byron, sidling up to a woman with your demon-haunted cynic exterior act on full, and suddenly flourishing, like a conjurer, the wounded heart within is almost bound to get you laid. Not guaranteed to work for the rest of us, mind. In other words I'm saying the poem is not actually about what it purports to be about, which is true of a great deal of the best poetry when you come to think of it.

Maybe this instrumental (as it were) reading of the poem looks like I'm trying to diminish it. Not so! I like the counterintuitive way its works as a love poem by repudiating love. I like the way it seems to encode the addressee's very name in its opening words (To Inez/Nay, smile...). Given that, after eight stanzas of moody complaining, Inez is 'smiling' in line 35, we can take it that she's enjoying the originality of his approach (it's especially nice that the smile comes after the speaker's most over-inflated piece of self-dramatisation, when he aligns himself with Edgar at his lowest point in Lear, 'the worst is not/So long as we can say This is the worst'). Perhaps the specifically Spanish context here takes of the edge off. 'My sullen brows' strikes an odd, rather poseur-ish note in English; but the Spanish ceño hosco is an unobjectionable usage. 'It is not love, it is not hate' perhaps conveys depressed anomie; but the phrase in its Latin version (non amore, non odio) is a standard Legalism for impartiality; one that Dante's Monarchia uses to describe Divine Justice. And there are various clues in the poem that the despair may not be as all-encompassing as he pretends. What is it that makes him 'fly from all I prized the most'? It is, he tells us, 'that weariness which springs/From all': but here the tension between the downbeat 'weariness' and the up-leaping 'springs' suggests that the Childe's mainspring is wound rather tighter than he's letting on.

One line in particular strikes an intriguing self-contradictory note.


What exile from himself can flee?
To zones, though more and more remote,
Still, still pursues, where'er I be,
The blight of life—the demon Thought.

There's a pretty obvious confusion here, isn't there, between exile and escape. The latter is where a person runs off to avoid a pursuer. The former is when a person is expelled from their homeland. To be banished requires a banisher, but the one thing you can pretty sure about where a banisher is concerned is that s/he will not then pursue you, Fury-like. They want rid of you; hence the banishing. The line 'What exile from himself can flee?' deliberately confuses the two states, and then doubles-down on the contradiction by filling both roles with Harry himself. The person who has exiled Harold from his homeland is Harold, and the person who is pursuing Harold from his homeland is Harold. But of course, this is what Arnold pinpoints in his 1853 preface as the quintessentially Romantic turn: 'the calm, the cheerfulness, the disinterested objectivity have disappeared: the dialogue of the mind with itself has commenced; modern problems have presented themselves ; we hear already the doubts, we witness the discouragement, of Hamlet and of Faust.' And a Harold. What Arnold missed, though, or at least didn't dilate upon, was how seductive this mode of self-tormenting doubleness could be, for the right woman, at the right time, in the right place.
Posted by Adam Roberts at 11:06