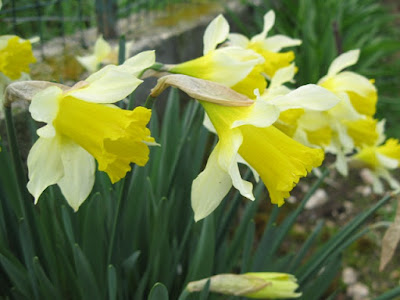 'Daffodils'. One of the most desperately famous poems of English Romanticism, this; which (having students discuss it in relation to the passage from Dorothy Wordworth's journal that acted as specific prompt to William's versifying) turns it into one of Romanticism's most teachable moments. The female provenance occluded; the male poet taking all the credit and so on. Maybe not outright plagiary, but something close to that. As far as William's poem is concerned, you may or may not know that the breed of daffodil native to Westmoreland at that time was the narcissus pseudonarcissus, sometimes called the Lent Lily: it has (see image above) a much whiter crown of flowers than the all-yellow daffodil familiar nowadays. Not sure knowing that adds much to our appreciation of the poem, except perhaps for making the comparison of flowers and stars a little less of a stretch:


I wandered lonely as a cloud
That floats on high o'er vales and hills,
When all at once I saw a crowd,
A host of golden daffodils;
Beside the lake, beneath the trees,
Fluttering and dancing in the breeze.

Continuous as the stars that shine
and twinkle on the Milky Way,
They stretched in never-ending line
Along the margin of a bay:
Ten thousand saw I at a glance,
Tossing their heads in sprightly dance.

The waves beside them danced; but they
Out-did the sparkling waves in glee:
A poet could not but be gay,
In such a jocund company:
I gazed—and gazed—but little thought
What wealth the show to me had brought:

For oft, when on my couch I lie
In vacant or in pensive mood,
They flash upon that inward eye
Which is the bliss of solitude;
And then my heart with pleasure fills,
And dances with the daffodils.

Here, by way of comparison, is the journal entry by Dorothy that, two years after the walk it records, William read and adapted into his poem:


Thursday 15th [April, 1802]. It was a threatening misty morning—but mild. We set off after dinner from Eusemere. Mrs Clarkson went a short way with us but turned back. The wind was furious and we thought we must have returned. We first rested in the large Boat-house, then under a furze Bush opposite Mr Clarkson's. Saw the plough going in the field. The wind seized our breath the Lake was rough. There was a Boat by itself floating in the middle of the Bay below Water Millock. We rested again in the Water Millock Lane. The hawthorns are black and green, the birches here and there greenish but there is yet more of purple to be seen on the Twigs. We got over into a field to avoid some cows—people working, a few primroses by the roadside, woodsorrel flower, the anemone, scentless violets, strawberries, and that starry yellow flower which Mrs C. calls pile wort. When we were in the woods beyond Gowbarrow park we saw a few daffodils close to the water side. We fancied that the lake had floated the seeds ashore and that the little colony had so sprung up. But as we went along there were more and yet more and at last under the boughs of the trees, we saw that there was a long belt of them along the shore, about the breadth of a country turnpike road. I never saw daffodils so beautiful they grew among the mossy stones about and about them, some rested their heads upon these stones as on a pillow for weariness and the rest tossed and reeled and danced and seemed as if they verily laughed with the wind that blew upon them over the lake, they looked so gay ever glancing ever changing. This wind blew directly over the lake to them. There was here and there a little knot and a few stragglers a few yards higher up but they were so few as not to disturb the simplicity and unity and life of that one busy highway. We rested again and again. The Bays were stormy, and we heard the waves at different distances and in the middle of the water like the sea. Rain came on—we were wet when we reached Luffs but we called in. Luckily all was chearless and gloomy so we faced the storm—we must have been wet if we had waited—put on dry clothes at Dobson's. I was very kindly treated by a young woman, the Landlady looked sour but it is her way. She gave us a goodish supper. Excellent ham and potatoes. We paid 7/- when we came away. William was sitting by a bright fire when I came downstairs. He soon made his way to the Library piled up in a corner of the window. He brought out a volume of Enfield's Speaker, another miscellany, and an odd volume of Congreve's plays. We had a glass of warm rum and water. We enjoyed ourselves and wished for Mary. It rained and blew when we went to bed. N.B. Deer in Gowbarrow park like skeletons. [Mary Moorman, Journals of Dorothy Wordsworth: The Alfoxden Journal 1798, The Grasmere Journals 1800-1803 (New York: Oxford UP, 1971), 109-110]

William's poem is a very vertical, abrupt piece: he's up like a cloud, he's down beneath the trees and in the dirt with the flowers; he's back up with the stars, he's down on his couch. Where Dorothy describes the process of gradually coming across more and more of the daffodils ('When we were in the woods beyond Gowbarrow park we saw a few daffodils close to the water side ... as we went along there were more and yet more and at last under the boughs of the trees, we saw that there was a long belt of them along the shore, about the breadth of a country turnpike road.'), William sees his blooms altogether and 'all at once'. Much abrupt. Mucho abrupto. Conversely, where William cuts sharply from encountering the daffodils to being, suddenly, far removed from them, on his couch in pensive mood, Dorothy spools the walk out with lots of vivid detail, and then reels it back in again. For Dorothy not only are the daffodils part of a rich variety of other blooms ('primroses, woodsorrel flower, the anemone, scentless violets, strawberries, pile wort'), but the daffodils themselves do more than just dance: some lay their heads down as if sleeping, some laugh, some reel and dance, some glance. For William there are only daffodils, a nether-sky of daffodils in oppressive monotonous profusion, and all they do is dance: 'dancing [6] ... never-ending [9] ... dance [12] ... danced [13] ... dances [24]'. I think by numbering the daffodils, as he does in line 6, Wordsworth in a small way adds to this sense of slightly manic monotony.

But the main difference between the two accounts is that Dorothy's is so naturally embedded in a human context where William's is so alienated from precisely that. In Dorothy's version she and William go walking, with (for a time) Mrs Clarkson, and along the way they recall Mrs Coleridge, and are kindly treated by a women in the inn and sourly by the landlady. And it's not just a personal context. This is a landscape being worked: the ploughman is turning over the April soil; when the Wordsworths hop over a wall to escape some cows they meet 'people working'. This landscape, described with such vivid particularity, and with such an fine sense of pace and flow, is a lived-in landscape, various and well-textured. Nor is it idealised: the rougher weather makes the Wordsworths frère et soeur wet and unhappy; and we realise it won't make the lives of the workmen and ploughmen any more pleasant. The deer at the end are skeleton thin because they're the ones who have survived—just—the starvation of winter and made it into the start of Spring. By contrast William has excised not only Dorothy but everybody else as well from his account: it's all I, I, I; it's 'A' poet; it's the bliss of solitude. It's the psychosubjective claustrophobia of the Egotistical Sublime. It's Mr Narcissus admiring his own reflection in the narcissus pseudonarcissi.


It was a threat'ning misty morn—but mild.
We set off after dinner from Eusemere.
Ms Clarkson went a short way with us but
Turned back. The wind was furious and we thought

and then again, a little later


The Bays were stormy, and we heard the waves
At diff'rent distances and in the midst
Of the water like the sea the rain came on

and so on. There's also the way, throughout, her precisely observed prose keeps trembling on the edge of reverting to verse:


The hawthorns here are black and green,
The birches there are greenish
But there is more of purple seen
On the Twigs ...

and so on. It is a poetry of variety, as Wordsworth's is a poetry of monotony. More, as verse this little lyric is not WW's best: in what universe is 'Ten thousand saw I at a glance' a better line of poetry than 'I saw ten thousand at a glance'? And 'What wealth the show to me had brought' is a frankly contorted line. So I suppose the question becomes: why has this poem become so very, very famous (and Dorothy's lovely prose not)?
Posted by Adam Roberts at 13:38