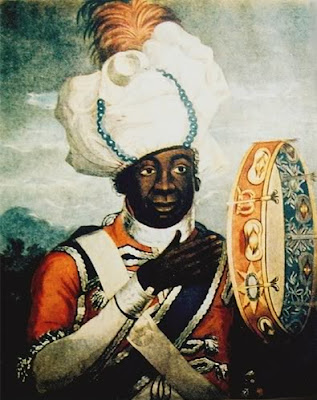 Part 2 of Childe Harold's Pilgrimage (1812) is the Greece and Albania section. It's better than Part 1, and not just because of its subject matter. I say so even though I am personally more interested in Greece than in Spain, and for reasons similar to Byron (possibly the only point at which I could be described as in any way Byronic), to do with the shaping power of a education in the Classics. But that's not it: the verse itself better here, more fluent and reflective and muscular throughout. Perhaps obeying some invisible law of balance, the one inset lyric of this section is rather worse than the inset lyrics in the other sections. It comes after some vivid Spenserian stanzas lamenting Greece's occupation by the Turks; a sideswipe at Lord Elgin for pinching the Parthenon Marbles; and then Harold sailing on up to Albania. He pities Greece, but he admires Albania; and the canto's lyric is a stomping little piece addressed to a 'Tambourgi', Turkish for Drummer:


Tambourgi! Tambourgi! thy larum afar
Gives hope to the valiant, and promise of war;
All the sons of the mountains arise at the note,
Chimariot, Illyrian, and dark Suliote!

Oh! who is more brave than a dark Suliote,
To his snowy camese and his shaggy capote?
To the wolf and the vulture he leaves his wild flock,
And descends to the plain like the stream from the rock.

Shall the sons of Chimari, who never forgive
The fault of a friend, bid an enemy live?
Let those guns so unerring such vengeance forego?
What mark is so fair as the breast of a foe?

Macedonia sends forth her invincible race;
For a time they abandon the cave and the chase:
But those scarves of blood-red shall be redder, before
The sabre is sheathed and the battle is o'er.

Then the pirates of Parga that dwell by the waves,
And teach the pale Franks what it is to be slaves,
Shall leave on the beach the long galley and oar,
And track to his covert the captive on shore.

I ask not the pleasure that riches supply,
My sabre shall win what the feeble must buy:
Shall win the young bride with her long flowing hair,
And many a maid from her mother shall tear.

I love the fair face of the maid in her youth;
Her caresses shall lull me, her music shall soothe:
Let her bring from her chamber the many-toned lyre,
And sing us a song on the fall of her sire.

Remember the moment when Previsa fell,
The shrieks of the conquered, the conqueror's yell;
The roofs that we fired, and the plunder we shared,
The wealthy we slaughtered, the lovely we spared.

I talk not of mercy, I talk not of fear;
He neither must know who would serve the Vizier;
Since the days of our prophet, the crescent ne'er saw
A chief ever glorious like Ali Pasha.

Dark Muchtar his son to the Danube is sped,
Let the yellow-haired Giaours view his horsetail with dread;
When his Delhis come dashing in blood o'er the banks,
How few shall escape from the Muscovite ranks!

Selictar! unsheath then our chief's scimitar:
Tambourgi! thy larum gives promise of war.
Ye mountains that see us descend to the shore,
Shall view us as victors, or view us no more!

It's a strange poem, this, and you couldn't really say it works. This may have something to do with its uncertain balance between 'the Byronic voice' on the one hand, and the poet ventriloquising a markedly un-Byronic persona on the other. That is to say, this is a poem that exists oddly on the borderline between the familiar Byronic poem and something formally newer and more experimental, an early kind of dramatic monologue. 'I love the fair face of the maid in her youth' is a standard-enough Byronic sentiment; but, sexual predator though he was, Byron's poetic mode is not elsewhere this nakedly aggressive:


My sabre shall win what the feeble must buy:
Shall win the young bride with her long flowing hair,
And many a maid from her mother shall tear.

That's not the usual Byronic smack. There is, surely, clearly blue water between Byronic 'wickedness' and the actual savagery of Albanian ruler Ali Pasha, who was a byword for rapacious cruelty long before his death. Ali's Wikipedia page dedicates a whole section to his atrocities. Byron's contemporaries agreed:


His craving for additional power was insatiable ... Inflexible in his hatred, his love of revenge was the vice which at last, in conjunction with his avarice, caused the downfall of Ali. ... Ali had been guilty of an incestuous intercourse with Zobeide, the wife of Veli. Having previously administered to her a soporific potion, he stole to her bed, and consummated his crime. The unfortunate wife of Veli remained ignorant of the fact till she became pregnant, when her suspicions were excited by the dark hints of her female attendants, whom Ali had threatened with death if they disclosed his infamous conduct. In her despair she sent to desire an interview with the author of her misery. His only reply was an avowal of his criminality. With much difficulty he put a stop to her tears and lamentations, and prevailed on her to promise silence respecting the atrocious deed; a deed which he soon after rendered more atrocious, by the murder of the unborn babe. Nor did Ali stop here. To remove all witnesses of his guilt, he ordered the women who were privy to it to be thrown into the lake by his black mutes. [Richard A. Davenport, The life of Ali Pasha of Tepebni, Vizier of Epirus (1837), 359]

That's just one of a whole litany of Ali Pasha's nastiness recorded by Davenport in a book whose title-page (epigraph: 'there is no more mercy in him than there is milk in a male tiger') makes slightly wrongfooting reading for the fan of C S Lewis's Narnia books: Aslan indeed! Davenport's theme is that Ali's ‘utter contempt of truth and honour and his reckless shedding of blood afford a melancholy proof of the evils which result from the possession of unlimited authority and the absence of moral or religious restraints’. By adopting the voice of an enthusiastic Albanian warrior in Ali's army, calling on the Drummer to rouse up everybody's spirits for some slaughter and rapine, Byron runs the risk of revealing how close his more characteristic quasi-in-propria-persona works sound to this Ali-style extremity.

I don't want to make heavy weather of this. 'Tambourgi, Tambourgi!' is, on one level, a standard, even a constitutive example of Orientalism 101. But larding the verse with so many exotic-sounding 'foreign' words doesn't glamorise, or more to the point doesn't distance the poem as much as you might think. 'Tambourgi' sounds very outlandish; but etymologically it is linked to such homely English words for 'drum' as tabor and tambour, all in turn derived via the French tambour ‎(“drum”) from Arabic طُنْبُور ‎ṭunbūr. 'Ilyrian' is familiar from Shakespeare; and if we take the poem to be straightforwardly Islamophobic we may be surprised to discover that the Suliotes ('Oh! who is more brave than a dark Suliote?') were a Christian people. 'Camese' and 'capote' are French, not Turkish or Arabic, words. And so on: it is a poem as much concerned with the passage back into Europe ('Dark Muchtar his son to the Danube is sped') as it is with the imaginative projection further east into an Orientalised sexualised violence.

The bottom line is the tabor-banging insistence of this Tambourgi-metre; all those galloping anapests, that on-running prosodic fluency. It's about, and conceivably it tacitly critiques, the notion that people can get so caught up in the drumbeat urgency of the moment they commit atrocity. And the line 'Selictar! unsheath then our chief's scimitar' is either a horrid lapse into uneuphonious sibilance, or else an onomatopoeic mimicking of the sound a blade makes as it is whisked out of its scabbard. Hard to say, really.
Posted by Adam Roberts at 02:16