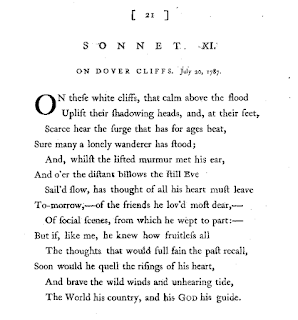 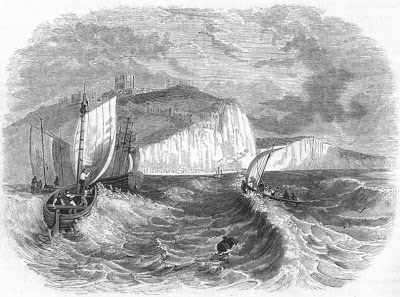 [That's an 1845 engraving of Dover, not part of the original collection; I'm putting it in there because I like the look of it] The collection has taken us through Northumberland and into Scotland, coming back via Hampshire. Now we're at the famous white cliffs of Dover, prior to Bowles sailing for the Continent. Naturally enough the holiday prospect of an enjoyable tour of northern Europe fills him with: elegant sorrow.


On these white cliffs, that calm above the flood
Uplift their shadowing heads, and, at their feet,
Scarce hear the surge that has for ages beat,
Sure many a lonely wanderer has stood;
And whilst the lifted murmur met his ear,
And o’er the distant billows the still Eve
Sailed slow, has thought of all his heart must leave
To-morrow;—of the friends he lov'd most dear,—
Of social scenes, from which he wept to part:—
But if, like me, he knew how fruitless all
The thoughts that would full fain the past recall,
Soon would he quell the risings of his heart,
And brave the wild winds and unhearing tide,
The world his country, and his GOD his guide.

I like the way 'calm' in line 1 exists, Empsonian-ambiguously (and it's not the first time Seven Types of Ambiguity has popped into my head whilst reading these poems) as a sort of superposition of adjective and verb; the cliffs are calm; or the cliffs calm the sea. These two things pull in different directions, and that tug is relevant to the main theme of the poem. The first (the cliffs are calm although the sea is not) is picked up in the mannerist exaggeration of the cliffs' height, lifting themselves so far above the surf below they can hardly hear it. The second (the presence of the cliffs, in their monumental stillness, imparts a calm to the otherwise turbulent seascape; or at least to the mind of the speaker, which is the real theme here). The poem introduces multiple travellers, 'many a lonely wanderer'; then reduces the number to one ('But if he knew how fruitless...') by way of conflating the 'he' with the poem's 'I'.  The cliffs represent the border between home and the Otherlands; and the talisman the anxious traveller carries with him is that countries are human divisions; God thinks in terms of the whole world.

As with earlier sonnets, there's a couple of semiological blurrings that I can't make up my mind about; they're distracting muddlings indicative of a soggy imagination or they're clever foldings-together of related concepts that evocatively problematise the boundary between inside and outside. So, for example: the cliffs can hear, if faintly, the sea; but the tide itself is 'unhearing'. Why would one inanimate object be granting figurative aural powers and not another? The answer of course is that it is the poet who is hearing, or whose hearing is muffled (by the wind, I guess); and that he has exported his inner state onto the outer world. Likewise, it is the poet who is about to get on a ship and sail slow through the distant billows; and the way he talks about that in this sonnet is by describing evening (rather distractingly capitalised; but I'm not sure anything is gained by linking the poem with the Garden of Eden) as the boat-passenger. Good? Not-good? 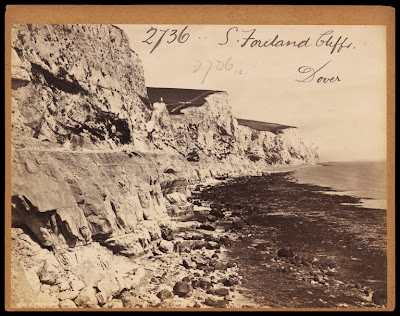