Bowles 3: 'Written at Tinemouth, Northumberland, After a Tempestuous Voyage' Here's the sonnet in modern orthography:


As slow I climb the cliff's ascending side,
Much musing on the track of terror past,
When o'er the dark wave rode the howling blast,
Pleas'd I look back, and view the tranquil tide,
That laves the pebbled shore; and now the beam
Of evening smiles on the grey battlement,
And yon forsaken tow'r that time has rent:—
The lifted oar far off with silver gleam
Is touch'd, and the hush'd billows seem to sleep!
Sooth'd by the scene, ev'n thus on sorrow's breast
A kindred stillness steals, and bids her rest;
Whilst sad airs stilly sigh along the deep,
Like melodies which mourn upon the lyre,
Wak'd by the breeze, and as they mourn, expire.

This is a poem about Tynemouth Castle and Priory. The link, there, takes you to the relevant English Heritage website. If you've never been, it's worth browsing that site a little to get a sense of the topography Bowles is describing; but if you haven't time for that, here is an image of the place's pleasing Gothic ruination: 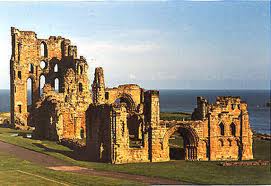 And here is an aerial shot, to give a sense of how extensive is the cliff's ascending side. 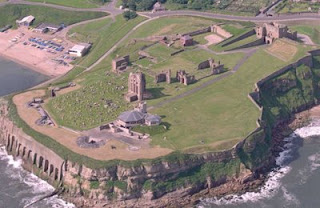 Bowles's poem, to state the most obvious thing about it, is an example of the eighteenth-century Loco-Descriptive Picturesque. Poet climbs eminence, regards old ruin, is moved to emotional response which he communicates to the reader. Here's a relevant passage from Adam Potkay's Wordsworth's Ethics (which I'm half way through reading now, actually; very much enjoying it):


"Loco-Descriptive" is a Romantic-era phrase for a poetic genre rooted in the eighteenth-century. The Oxford English Dictionary, defining the term as "descriptive of local scenery, etc" traces it to Wordsworth's Preface to his 1815 poem. The loco-descriptive cannot be divided too strictly from more generally descriptive verse. Wordsworth's Preface categorizes the genre under the heading of "Idyllium,--descriptive either of the processes and appearances of external nature, as the Seasons of Thomson; or of characters, manners and sentiments," especially "in conjunction with the appearances of Nature" (Prose Works 3:28). As distinct from descriptive verse that renders external nature in a general, abstract, or ideal way, loco-descriptive poetry treats specifically named places or things (estates, buildings, rivers, even a few mines and caves). [Potkay, Wordsworth's Ethics (John Hopkins 2012), 15]

Potkay also quotes M H Abram's 'sharper distinction' between 18th-century loco-descriptive poetry 'which he associates with hill prospects' and the more self-consciously 'lyricized' descriptive-meditative poems he called the 'greater Romantic lyric' (that's the Immortality Ode et al). Bowles, clearly, is writing a sonnet-length version of the former type here, with a cliff prospect instead of a hill one. One more thing Potkay notes: 'although Wordsworth lent his authority to the phrase [Loco-Descriptive] it goes back further: Robert Aubin adduces the title of Daniel Walters's "Landough: a Loco-Descriptive Poem" published in 1780. The popularity of a genre with at least titular interest in actual locales is staggering: Aubin's bibliography of, as he calls it, "topographical" poetry lists roughly 3500 items, all but a few of them from the period 1700-1840.'

That's part of the context for Bowles's sonnet. More context comes from the argument critics have had about the ideological freight of this sort of poetry. For John Barrell, in his The Idea of Landscape and the Sense of Place 1730-1840 (1972), the privileged 'raised' point-of-view of the loco-descriptive piece elides more-or-less directly with the socially privileged bourgeois subject. This, for Barrell, is a self-evidently bad thing (Potkay summarises it as: 'the perspective of a detached observer who stands above a landscape , reducing it to a picturesque frame by eliminating its particularities. The superior observer of the prospect poem represents, for Barrell, the deracinated bourgeoisie that will appropriate the countryside without inhabiting it or understanding it as a locality'). I'm also reading Chris Fitter's Poetry, Space, Landscape: Toward a New Theory (Cambridge Univ. Press 1995), which advances a rather more intricate (you may prefer: 'sophisticated', 'nuanced') or the relationship between social, cultural and psycho-evolutionary determinants in the aesthetics of landscape.

In Bowles's sonnet, here, the speaker has recently undertaken a perilous journey over a tempestuous sea. The subtitle tells us so, and the poem itself makes plain his relief at having survived, and his pleasure at the now-tranquil marine prospect. The timbre of the piece, as well as the example from the earlier sonnets, invites us to read this as a generalised or symbolic way of describing the journey through 'life'. (A modern parallel that occurs to me is Barry Manilow's song: 'I made it through the rain'. Wouldn't it be cool to write a literary-critical volume comparing Bowles and Barry?) The 'life is a journey' analogy might come over as merely banal, except that the poem itself strikes a deliberately ambiguous emotional note with respect of it. The storm is behind the speaker; he is 'pleas'd [to] look back, and view the tranquil tide'. His forward prospect is of the picturesque tower; now the sea washes the beach, and hushes the boat to sleep. The susurrus hushes 'sorrow's breast' (the narrator's we assume) 'and bids her [the breast] rest.' But by the same token, the picturesque tower is forsaken, ruinous, and the poem ends with the three lines that (a) draw in a remarkably dissonant, hissing sibilance ('whilst sad airs stilly sigh along the deep') onomatopoeically inserting the sound of the surf into this sonnet. This in turn leads us to Bowles's invocation of the Eolian Harp trope -- surely amongst the most mournful, even morbid iterations of that common late-18th-century figure:


Like melodies which mourn upon the lyre,
Wak'd by the breeze, and as they mourn, expire.

There is something sad about survival, the poem seems to be saying. Making it through the rain is not necessarily a triumphant or rousing emotional state. I'd suggest that the way this particular sonnet squeezes or distorts the octave-sestet format (nine lines, then a turn to melancholy in the last three: a weirdly experimental nonet-tercet structure) works subtly to emphasise this complex of emotional reactions.

Here is another passage from Barrell's book:


The contemplation of landscape was not, then, a passive activity: it involved restructuring the landscape in the imagination, according to principles of composition that had to be learned, and were indeed learned so thoroughly that in the later eighteenth-century it became impossible for anyone with an aesthetic interest in landscape to look at the countryside without applying them, whether he knew he was doing so or not. These principles were derived from the Roman landscape-painters of the seventeenth-century. [Barrell, The Idea of Landscape, 6]

But Bowles is not applying principles of composition derived from the Roman landscape-painters of the seventeenth-century to his landscape. If the aesthetic framework for this sonnet derives from anywhere (of course it derives from many things; but looking for a primary route through) it derives from Edgar’s speech in Lear about the samphire-collector on the cliff (Act 4, scene 6):


Come on, sir; here's the place: stand still. How fearful
And dizzy 'tis, to cast one's eyes so low!
The crows and choughs that wing the midway air
Show scarce so gross as beetles: half way down
Hangs one that gathers samphire, dreadful trade!
Methinks he seems no bigger than his head:
The fishermen, that walk upon the beach,
Appear like mice; and yond tall anchoring bark,
Diminish'd to her cock; her cock, a buoy
Almost too small for sight: the murmuring surge,
That on the unnumber'd idle pebbles chafes,
Cannot be heard so high. I'll look no more;
Lest my brain turn, and the deficient sight
Topple down headlong.

There's a related, although (obviously) diluted and less extremely vertiginous, flavour to Bowle's sonnet. I think what this does is to work to unsettle the notion of privilege; to imply that the superior bourgeois subject will tend not merely enjoy his prospect (although he will do that) but also to be unnerved by it. Sitting on top of the world is proverbially a wonderful feeling; but presumably it is also a vertiginous, alarming one. You might fall!
Posted by Adam Roberts at 00:15