Bowles 2, 'Languid, and sad, and slow from day to day' 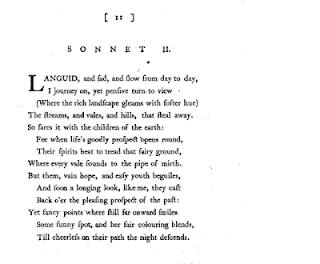 Languid, and sad, and slow from day to day,
I journey on, yet pensive turn to view
(Where the rich landscape gleams with softer hue)
The streams, and vales, and hills, that steal away.
So fares it with the children of the earth;
For when life's goodly prospect opens round,
Their spirits beat to tread that fairy ground,
Where every vale sounds to the pipe of mirth.
But them, vain hope, and easy youth beguiles,
And soon a longing look, like me, they cast
Back o'er the pleasing prospect of the past:
Yet fancy points where still far onward smiles.
Some sunny spot, and her fair colouring blends,
Till cheerless on their path the night descends.


Bowles is, amongst other things, playing games with monosyllables, by way of stepping through his mournful, slow theme. The first line is 80% monosyllabic; the second 60%; the third 100%; the pattern looks as though it will repeat (line 6: 80%; line 5760%) but then it doesn't. 'Spirits' is disyllabic I suppose; although its quantity is strange -- a classical long syllable that reads more like a single stress than a trochee. The 100% monosyllable line is postponed to line 8 -- as if the poem is already slowing, lengthening, drawing out its form. Then it's

OK, so it's a disproportionately monosyllabic poem: let me not flog the point to death. I think what I'm suggesting is that there is something of a pulse, or ebb-flow, to the way the poem handles its monosylls. Languid and sad and slow. Otherwise, the blot in the sonnet to my ear is 'pipe of mirth', which strikes an artificial, conventionalised note (playing a recorder outside, no matter how perkily, no longer correlates to 'mirth' in the sense the poem needs it to; and I'm not convinced it did the 1780s either). I mind less the deliberate blurring of topographies, physical and temporal, the 'walk through the countryside' that is also somehow 'the walk through life.' I assume the idea is: we are walking eastward, whilst the sun sets behind us. The land behind us, bathed in roseate light, is our youth. There are peaks ahead where the sun still illuminates the grass. But we all know where we are going. Don't we.

Well, one place we're going (of course) is Milton. Bowles's 'goodly prospect' invokes, in this phrase directly and in many of its other details by implication, Milton's 'Scout' epic simile from Paradise Lost 3:543-551:


.....................As when a Scout
Through dark and desart wayes with peril gone
All night; at last by break of chearful dawne
Obtains the brow of some high-climbing Hill,
Which to his eye discovers unaware
The goodly prospect of some forein land
First-seen, or some renown'd Metropolis
With glistering Spires and Pinnacles adorn'd,
Which now the Rising Sun guilds with his beams.

Well that's fine, as far as it goes; and unusually rich piece of landscape-painting by the blind poet. Except that what the epic simile is actually describing is: Satan, having escaped Hell, looking down (from 'the lower stair/That scal'd by steps of Gold to Heav'n Gate')

This is what Milton is comparing the Scout's wonder to; and at a second remove, we might say, what (therefore) Bowles is comparing himself to.


Such wonder seis'd, though after Heaven seen,
The Spirit maligne, but much more envy seis'd
At sight of all this World beheld so faire.
...He views in bredth, and without longer pause
Down right into the Worlds first Region throws
His flight precipitant, and windes with ease
Through the pure marble Air his oblique way
Amongst innumerable Starrs.

The point is not that we are Satanic in the strict sense; but that we share with 'the Spirit maligne' the condition of ontological exile. Like him our 'spirits beat to tread that fairy ground' (is there a hint of Miltonic angel/devil wings about that 'beat'?). Like him we will not be allowed to settle in the land we covet.