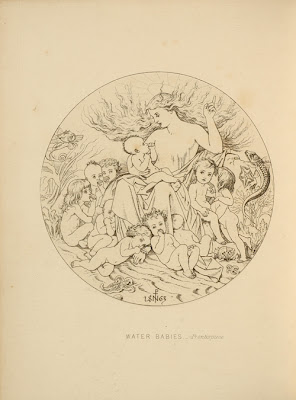 That's the frontispiece to Kingsley's novel. Here's Art Historian Jonathan Ribner talking about it, as a specific reaction to the Great Stink.


In its Christian underpinning, Martin's vision of London awash with pure water bears affinity to the association of water with moral redemption in Kingsley's classic, The Water Babies: A Fairy Tale for A Land Baby (1863). This didactic fantasy - reminiscent, at once, of The Pilgrim's Progress and of Kingsley's favourite author, Rabelais - was written for the author's five- year-old son, Grenville. Its satirical edge, however, is thoroughly adult. Tom, an orphaned chimney sweep - who 'never washed himself, for there was no water up the court where he lived' - escapes from a life of squalid misery at the hands of a cruel master (Mr Grimes) by bathing in a river. With the assistance of a guardian fairy disguised as a poor Irish woman, Tom sheds his sooty skin and is transformed into a water baby - a gilled homunculus capable of conversing with trout, salmon, and other creatures that he meets on an adventurous passage down the river, to the sea, and on a pilgrimage to the Other-end-of- Nowhere. Along with his fellow water babies, Tom leads a charmed aquatic life, illustrated by Sir Noel Paton with a zoological specificity that recalls Kingsley's exhortation to the amateur naturalist, in his popular treatise on seaside collecting, to dauntlessly study God's marine creations without regard for beauty. 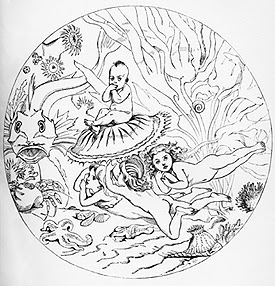 Under the guidance of the fairy, Tom learns justice and goodness, loses his former taste for cruel pranks, and forgives Mr Grimes, whose punishment in the afterlife is imprisonment in chimney No. 345 where, watched over by a talking truncheon, he fruitlessly tries to light his pipe.

The Water Babies embodies an association between cleansing and redemption that, modelled on the sacrament of baptism, had shaped the symbolism of Kingsley's early novel Yeast (1849). There, Argemone Lavington dies with the knowledge that her family has been cursed by its selfish denial of clean water to its poor tenants. Thus, her final plea to Lancelot that he redeem her family by providing the people of Ashy with water from the Nunpool: 'Take all the water, every drop, and make Ashy clean again! Make a great fountain of it ... and wash away the sins of the Lavingtons ....' (Yeast, p 304). Continuation of this line of symbolism in The Water Babies is most evident in the song sung by the river in which Tom is transformed. There, the purity and pollution of water are identified, respectively, with salvation and sin.
[Jonathan P Ribner, 'The Thames and Sin in the age of the Great Stink: Some artistic and literary responses to a Victorian environmental crisis' The British Art Journal, Vol. 1, No. 2 (Spring 2000), 38-46]