I've been looking over The Pursuits of Literature: A Satirical Poem in Four Dialogues, with Notes, originally issued anonymously (four volumes, 1794-1797; afterwards several times reprinted in one), written by Thomas James Mathias. If you click that link it takes you to the Google Books edition, which contains (before the main title: scroll up) the follow, click-to-embiggen-if-you-like, interesting manuscript note: 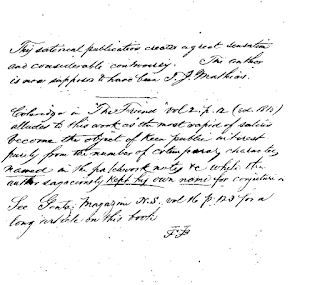 Let me transcribe that for you:


This satirical publication created a great sensation and considerable controversy. The author is now confidently stated to have been T. J. Mathias. [The first edition appeared in 1794-7, 8vo. 4 pts. in 1 vol. In the different editions there were variations, omissions, &c, &c. Copies of the edition printed in 1812 in 4to. and folio, for the purpose of Illustration, a pursuit highly deprecated by the author in his Poem.]

Coleridge, in 'The Friend,' vol. 2, p. 12, (ed. 1818), alludes to this work as "the most vapid of satires become the object of keen public interest purely from the number of contemporary characters named in the patchwork notes (which possess, however, the comparative merit of being more poetical than the text), and because, to increase the stimulus, the author has sagaciously kept his own name for whispers and conjectures." See Gent. Mag. N.8. vol. 16, p. 123, for a long article on this book.

Well, see, that is interesting in its own right (since I'm working on Coleridge now); but it also helps us identify who wrote those lines. Because they appear in print in William Thomas Lowndes and Henry George Bohn's The Bibliographer's Manual of English Literature (Vol 7; 1861), 2012. (Indeed, if you've been paying attention you'll see that I haven't transcribed the MS at all; I've copied the text from Lowndes/Bohn 1861 book). From this we can deduce: the edition scanned into Google Books was owned and scribbled upon by Lowndes or Bohn, and probably by the former. But wait: whose are those intials at the end of the MS marginalium? It looks to me like 'JJ' or 'TT'; and neither WTL nor HGB. Curiouser and curiouser. (Actually, peering closely at it, I wonder if it isn't 'JCJB', with the C crossing the first J, and the second J providing the spar for the B. What do you think?)
Posted by Adam Roberts at 02:04