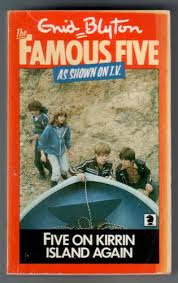 I couldn't get hold of a copy of the recursive-sounding (but I daresay actually not) fifth Famous Five novel, Five Go Off in a Caravan. Let the word-salad second paragraph in this Wikipedia summary stand in for a proper response to that text:


It is A Hot Sunny Day And The Kirrin Children Are In Julian, Dick, And Anne's Timothy "Timmy" The Dog, Sees A Circus Go By. this Gives George (Julian, Dick & Anne's Cousin) An idea. She Says That They Should Go on A Camping Holiday. the Others Are really Excited About the Idea that George Has Said

Er, OK. Instead we hop straight to number six: Five on Kirrin Island Again. This was where Blyton originally intended stopping the series, and I like the riverrun-esque logic of bringing the five back to the site of their original adventure. Of course Blyton changed her mind, and what encouraged her to do so were: sales-figures ('By the end of 1953, more than 6 million copies of these books had been printed and sold. Today, more than two million copies of the books are sold each year, making them one of the biggest-selling series for children ever written. Over a hundred million books have been sold').

This is The One In Which Uncle Quentin Ensconces Himself On Kirrin Island Alone To Do Some Research. He's supposed to signal the mainland from his tower morning and night to reassure people back in the cottage that everything is OK, but the signals stop and the kids go across to see what's up. We meet the Coastguard, and a fellow called Mr. Curton (and his son Martin) who is staying in the area and who may or may not be a baddie. Which is to say: of course he's a baddie, what with Blyton's consistent characterisation of adults as either distant or malign, but we don't realise that he is until quite a lot of the story has been told. The Five discover a new tunnel. It would hardly be a Famous Five tale without a tunnel to explore:


The tunnel at first had a very low roof, and the boys had to walk along in a stooping position, which was very tiring indeed. But after a bit the roof became higher and Julian, flashing his torch round, saw that the walls and floor, instead of being made of soil, where now made of rock ... they knew they must be under the rocky bed of the sea. They were walking under the sea to Kirrin Island. How strange, how unbelievably astonishing! [ch.20]

Unbelievably astonishing are indeed les mots justes here, since such a tunnel, lacking any manner of continuously operating pumping machinery, would be wholly filled with water. Still: let me not nitpick. At any rate we discover what happened to Uncle Q.: two men parachuted onto the island and took him prisoner. Why? Because he has been experimenting 'to find a way of replacing all coal, coke and oil -- an idea to give the world all the heat and power it wants, and to do away with mines and miners' [ch.16]. This has an almost science fictional vibe to it, which clearly is a good thing. And although the bad men threaten to blow up the whole island, the Five, especially Timmy, overcome them and all ends well. Better than well, we assume: for Uncle Q.'s idea (which he insists he will 'give to the whole world -- it shall not be in the power of any one country or collection of men') presumably effected a revolution, transforming the Earth into a post-scarcity utopia. Hurrah!
Posted by Adam Roberts at 02:50