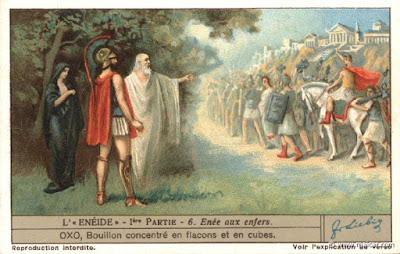 A pendant to yesterday's post, this, prompted in part by chancing upon that splendid OXO advert. Because, in a very real and not-at-all spurious sense, book 6 of the Aeneid really is like a cube of bouillon concentré. Into it is compressed the whole moral and socio-political scheme of an entire epic poem: life and death, right and wrong, the ethos of the warrior, pietas, virtus, and their consequences. More, the entire future-history of Rome is squeezed into the final hundred lines, as (illustrated above, there) beefy future-Roman worthies and heroes parade past Aeneas and his father, whilst the Sybil looks on. Death, this portion of the poem is saying, is a compressed or concentrated form of life: all the unimportant stuff is boiled away, and we are left with only one's viler ethical transgressions, or one's more important virtues and strengths. And when we think about it that way, we are drawn to the perhaps odd conclusion that for Vergil the underworld is, in essence, three things. First it is sorrow and belatedness and incompletion, as with the wailing, teeming hordes of the newly dead on the sandy shores of the Styx, or Aeneas' encounter with abandoned Palinurus or broken-hearted Dido. Second, it is punishment (a huge triple-walled prison in which the wicked are tortured in various horrible ways, and grim-faced Phlegyas, 'miserrimus', 'the most unblest', bellows at the top of his voice 'discite justitiam moniti non temnere divos!' LEARN TO BE JUST AND NOT TO SLIGHT THE GODS!). And thirdly, it is pleasant open fields, the company of great men, athletic contests and, finally, a glorious parade back into the light and the coming glory of Rome. In other words, Vergil is saying death is a condensed version of three things: loss, punishment and Empire.

I've been thinking about Heaney's translation, off and on, all weekend. It's sent me back to the original, which is surely the highest praise a reader can offer a translator. Actually, I think Colin Burrow puts his finger on something important in his recent LRB review of the work. Burrow stresses how important Vergil was throughout the whole of Heaney's career. For early Heaney, the wraiths 'the multitudes that stand on the wrong side of the Styx longing for passage across at the start of his journey through the underworld' are the key figures: 'It’s as though Heaney wants to imagine that these homeless and nameless spirits would take over the centres of empire and power, and drive away the imperial heroes with which Book VI concludes'. The problem is that it's just really hard to get away from the deeply imperial ethos saturating the whole of the Aeneid, and this book in particular. Burrow thinks it made Heaney uneasy.


That association between the Aeneid and political unease grew out of Station Island (1984), in which Heaney first seriously engaged with the descent to the underworld and its literary implications. In the title poem of that collection he related how the spirits of dead priests, dead friends, victims of the Troubles and finally James Joyce, appeared from the pilgrimage site of St Patrick’s Purgatory on Station Island to inform and rebuke him. Heaney implicitly presented himself as kin to Dante or Aeneas, or to T.S. Eliot in Dantesque prophetic mode: a poet who could absorb and transform voices from his own and from the literary past. But he combined that self-aggrandisement with a powerful dose of guilt. The imperial poets Dante and Virgil were unsettling doubles for a poet who had lived through the Troubles, and had seen friends and family killed by imperial rule ... The traveller in the underworld runs the risk of becoming a fellow-traveller, who is drawn away from honest engagement with Irish politics by a misplaced desire to beautify death, and to insinuate himself into a larger tradition of poetic authority

Burrows goes on to argue that


The death of Heaney’s father in 1986 brought with it significant changes in his attitudes to Virgil. The political edges are smoothed over, and Book VI in particular tends to be presented as more like a family drama than a political one. The ghost of Aeneas’s father, Anchises, flickers through Seeing Things (1991), and Heaney’s poetic responses to the Aeneid from the later 1980s onwards tend to be welded to the detail of domestic life. His final collection of verse, New Selected Poems 1988-2013, was carefully crafted in order to make it appear that Aeneid VI was central to his literary experience. The selection begins with a literal translation of the golden bough episode that had first appeared in Seeing Things. Close to its end is the sequence ‘Route 110’, which draws artfully wry parallels between Heaney’s own life and the events of Aeneid VI. The parallels begin with the young poet buying a copy of the poem at a secondhand bookshop from a sibylline bookseller. The book itself then becomes a golden bough that can guide the poet and draw him home. The Elysian fields are reimagined as ‘Not unlike a sports day in Bellaghy’, and Aeneas’ mutilated friend Deiphobus becomes ‘Mr Lavery, blown up in his own pub’.

A strange sort of compromise between old and new, Roman and Northern Irish, that. The recently-published translation of the whole of Aeneid VI does not play those sorts of games; but something in its very polish, the accomplished, stately earthy vividness of Heaney's versifying, oversmooths the finished product.

One of the biggest questions about the Aeneid, one critics and scholars still debate, is whether it is a simple encomium for Empire, sheer Augustan propaganda; or whether (as in Shakespeare, who presents us with a similar difficulty) the surface celebration of the triumph of the state and the authority of the strong leader veils a much more complex and critical sense of what Empire means. Since we nowadays tend to value complexity, and prize texts that hide cross-currents and ironies under their surface storytelling, it's tempting simply to assume the latter. I have to say, I'm not convinced. We might think that condensing together into one dark-coloured and potent cube loss, punishment and imperial glory is to force three immiscible elements into an unstable emulsion, that the contradictions and tensions in the ideological structure of the poem will pull it apart. But I don't think so. Of course we know that Empire is a grievous thing to be on the receiving-end of, as armies march into your homeland and subdue your way of life and prior freedoms to theirs. The Romans were perfectly well aware of that, too. The thing is: Empire is hard work for the conquerors, too, However asymmetric the balance, it entails losses and punishments on both sides. Maybe the mixture in Aeneid 6 speaks to a simpler truth.
Posted by Adam Roberts at 10:26