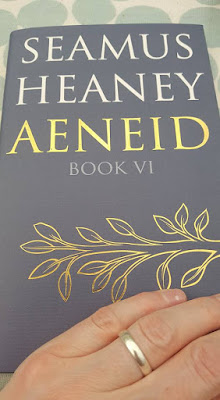 My copy of this arrived this morning, and I've been reading it today. It's not long: 45 pages of verse, with a couple of extra pages by way of preface and afterword. And the Aeneid is a poem I know well. It's a little odd, actually: the Iliad and the Odyssey are, patently, greater works of art; yet however much I love them and return to them, the Aeneid still occupies a uniquely special place in my heart. I first read it as an undergraduate in the (alas, long defunct) Classics department at Aberdeen University. I have read the whole poem in the original, some parts of it many times; and I've also read, I'd guess, a dozen English translations. So there we are.

And what of Heaney's? In we go. From near the beginning:


At Cumae, behind the broad cliff, an enormous cave
Has been quarried: a hundred entrances, a hundred
Wide-open mouths lead in, and out of them scramble
A hundred echoing voices, the Sibyl's responses.
They arrived at that threshold and the vestal cried,
'Now! Now you must ask what your fate is. The god
Is here with us! Apollo!' Her countenance suddenly
Paled and convulsed, hair got dishevelled,
Breast was aheave, heart beating wilder and wilder. [65-74]

And you think: hmm. The 'they' in 'they arrived at that threshold' means Aeneas and his people, but looks, here, as if it refers back to the Sibyl's hundredfold responses. And some of this is just, well ... ungainly. 'Breast was aheave'—seriously? Hair got dishevelled? Woh.

A certain amount of rough-hewnness has always been the Heaney USP, of course, and nitpicky pedantry is not the best frame of mind to appreciate the strengths of a poem, of course, of course. Except that Vergil, who would sometimes spend a whole day working on a single hexameter line (and sometimes end the day by scrubbing it out entirely) was one of the least rough-hewn poets who ever lived. The original behind 'hair got dishevelled' is non comptae mansere comae [Aeneid 6:48], which means 'nor did the trails of her hair stay braided' (by word-order the phrase means 'not braided remained her tresses': coma is the word behind comet, the 'hairy star'). The alliterative assonance of comptae and comae is lovely, and Vergil's non here is the third non in two lines, which uses repetition to build a more forceful sense of negation. Heaney doesn't capture any of that.

But maybe this is too fernickerty a way of reading the poem. So I drew back my focus a little, and read through. One of the problems facing a translator of Aeneid 6 is the Hamlet one: so many desperately famous lines. How to handle them? The Sybil looks forward:

That's fine (although 'rue' wobbles a little, credibility wise; and surging is rather more forceful than the Vergil's spumante, foaming, bubbling. You wouldn't translate Asti Spumante as 'Surging Asti wine', now, would you? What's that? You would? Well OK then!) And here's facilis descensus Averno, one of the most famous lines Vergil ever wrote:


The Sybil started to speak: 'Blood relation
Of gods, Trojan son of Anchises,
It is easy to descend to Avernus.
Death's dark door stands open day and night.
But to retrace your steps and get back to upper air,
That is the task, that is the understanding.
Only a few have prevailed, sons of gods
Whom Jupiter favoured, or heroes exalted to glory
By their own worth. At the centre it is all forest
And a ring of dark waters, the river Cocytus, furls
And flows round it. Still, if love so torments you,
If your need to be ferried twice across the Styx
And twice explore that deep dark abyss
Is so overwhelming, if you will and must go
That far, understand what else you must do.
Hid in the thick of a tree is a golden bough,
Gold to the tips of its leaves and the base of its stem,
Sacred (tradition declares) to the queen of that place. [172-89]

This is lovely verse: expertly using enjambment to complexify its steady, plain onward movement. 'At the centre it is all forest' (tenent media omnia silvae) is nicely economical, and 'in the thick of a tree' is beautifully vivid and tactile. Ah, but then the Sybil tells Aeneas he must


Pluck this sprout of fledged gold from its tree

and I can't be the only person to get distracted with visions of Brussels sprouts. Can I? It's alright though:


Then when they came to the fuming gorge at Avernus
They swept up through clear air and back down
To their chosen perch, a tree that was two trees
In one, green-leafed yet refulgent with gold.
Like mistletoe shining in cold winter woods.
Gripping its tree but not grafted, always in leaf,
Its yellowy berries in sprays curled round the bole—
Those flickering gold tendrils lit up the dark
Overhang of the oak and chimed in the breeze. [271-79]

Excellent stuff, in which Heaneyisms like 'bole' and 'cold winter woods' (silvae brumalae frigora in the original: 'forests frigid with wintertime') tangle expressively with Latinisms like 'refulgent' (from the original's refulsit).

And actually, the poem works best when it balances these two idioms. When it strays too close to just the Latin it tends to become inert:


Chaos and Phlegethon, O you hushed
Nocturnal expanses, let assent be forthcoming
As I tell what's been given to tell, let assent be divine
As I unveil things profoundly beyond us. [351-4]

Then again, moments of Heaneyish verbal clottedness sometimes misfire. 'In front of the house of the dead,/Between the dread jambs, is a courtyard': dead dread jambs? Dreadlocks? Dead jam? Hold up a moment.

A couple of the more famous passages. In the underworld Aeneas meets his late father Anchises, who narrates to him the future-history of Rome's glory, and sums up:

Very important, this, as a statement of what it meant to Romans to be Roman. David West translates as follows: 'Your task, Roman, and do not forget it, will be to govern the peoples of the world in your empire. These will be your arts—to impose a settled pattern upon peace, to spare the defeated and war down the proud.' West's 'war down the proud' nicely catches the way the Latin debellare, which means 'to defeat' or 'to eradicate', contains within it bellum, war. Heaney goes with:


But you, Roman,
Remember: to you will fall the exercise of power
Over the nations, and these will be your gifts—
To impose peace and justify your sway,
Spare those you conquer, crush those who overbear. [1155-9]

But that's a little, what would you say: flat? Dull? He's picked out the super ('over') in superbos, but not the bellum in debellare, and that's the wrong way about: 'proud' is better, here, than 'those who overbear' (what does that phrase even mean?). And what about the celebrated two gates with which the poem ends?


There are two gates of Sleep, one of which, they say,
Is made of horn and offers easy passage
To true visions; the other has a luminous, dense,
Ivory sheen, but through it, to the sky above,
The spirits of the dead send up false dreams.
Anchises, still guiding and discoursing,
Escorts his son and the Sibyl on their way
And lets them both out by the ivory gate. [1212-19]

The two gates are from Greek mythology: Vergil, here, is adopting an image from Homer's Odyssey 19:562. The seemingly-arbitrary distinction makes more sense in Greek, where there is a play upon the words linking κέρας, "horn" to κραίνω, "fulfil", and linking ἐλέφας, "ivory", and ἐλεφαίρομαι, "deceive". Hard to capture that in English, but hard too in Latin: horn is cornū, which means both horn and the crescent moon; ivory is elephantus, which word also means 'elephant'; though Vergil also uses the different word, eburna, which also means ivory. Nobody knows why Vergil brings his hero back to the real world via the ivory, not the horn, gate. It does rather imply that the Aeneas of the rest of the poem is some kind of a lie. Still:

could be Englished as


There are two twinned gates of Sleep, of which one is made
of the moon's crescent horns, through which true shades exit easily;
the other gleams with sheen of polished elephantine-tusk,
but through here the spirit-sent dreams are all a phantom task.
So Anchises attends his son and the Sibyl,
dismisses them with these words through the gate of ivory.

Maybe elephant/all phantom is too cheesy a pun. My theory is that the crucial thing here is not the true shades/false dreams thing. It's the easy (facilis) passage of the one, and the implicit hard passage of the other. Facilis descensus Averno, remember. It's not that Aeneas is a false dream: it's that he is true and false, first off easily descending, like a moonbeam sliding down; and then elephantishly clambering back up, like Hannibal's war-beasts ascending the Alps, to his mortal skies.
Posted by Adam Roberts at 05:24