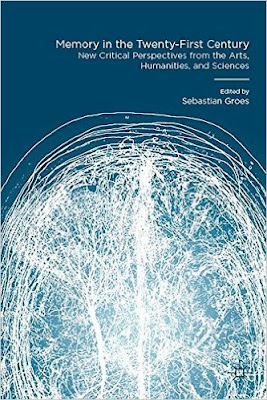 My contributor copy of Bas Groes' edited collection Memory in the Twenty-First Century: New Critical Perspectives from the Arts, Humanities, and Sciences (Palgrave 2016) arrived a couple of weeks ago. It's an interesting volume, though at $105 for a hardcover and nearly $80 for the ebook, nobody would call it cheap. My contribution is a piece on Borges, Philip K Dick and science-fiction memories, and its title involves a pun whereunto the descriptor 'tortuous' might, perhaps, be attached: 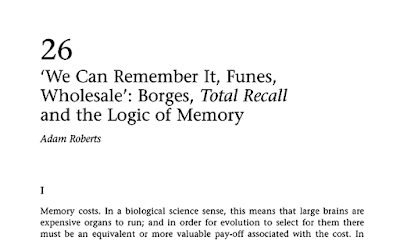 This book is one output from Groes' large-scale 'Memory Network' Project, which involved bringing together people from all sorts of different backgrounds to think about and talk about memory. There were various public colloquia, talks and presentations, a couple of which included me. Here's a picture from one. The body language and facial expression of my co-panelist here (Dundee's excellent Wendy Moncur) tells you everything you need to know about how much of my talk was the merest blather and nonsense. 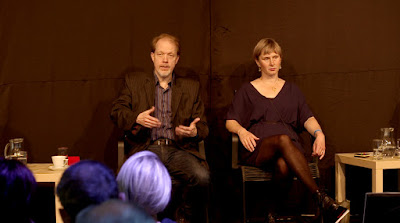 Still it was great to be involved, and the Memory in the 21st-Century volume contains a wealth of fascinating stuff.

Speaking just for myself, though, there's one loose end. One of the things in which I participated was a panel at the LSE in October 2015, during which Jessica Bland, Bas himself, Professor Barry C Smith, Dr Hugo Spiers and I talked about memory in front of what was, surprisingly for these sorts of things, a large and appreciative audience. In the time allotted for my particular blather and nonsense, I floated the idea the conventional neurophysical division of memory into two kinds, long term memory and short term memory, needs to be augmented with a third kind of neurophysical memory which belongs to neither of these categories: dreams. A fourth kind, a sort of technological add-on version of memory, strikes me as a plausible way of thinking about the subject nowadays, but this led discussion into the 'extended mind theory', which notion Professor Smith, genially but very firmly, repudiated. I'm more persuaded by this theory than Smith, but it strikes me as less interesting than my initial notion, which we didn't really get around to discussing at all.

Long-term memory and short-term memory are, clearly, both actual features of the human mind, more or less rational and structured ways of sorting past events and states of mind into retrievable form. But it seems to me impossible to deny that dreams are also a way in which the mind 'remembers' stuff. Since it is not a rational, or retrievably sorted (except at a kind of second hand, where elements but never the totality of a dream are 'logged' in the conscious memory), it is possible to neglect this fact, but fact is nonetheless surely what it is. If dreams aren't a way of 'remembering' things, then I don't know what they are. But if they are, and given that they run on radically different lines to the sortable-retrievable logic of long and short term memory, then it is worth thinking about what this tells us about how dreams mean, how they factor into the being-in-the-world of human beings as examples of homo memorius.

I'm half idly thinking of following this up. I'm not sure, though. It's kindling in my mind a little (smoke threading upwards from the heap of woodchips that occupies the inside of my skull) from reading a little Ignacio Matte Blanco. There is bound to be a bias towards researching memory as a function of the conscious mind, since that's the sort of memory that is amenable to data gathering and the testing of hypotheses. But we ought, surely, also to consider memory as a function of the subconscious mind. To what extent, and with what effect, do dreams parse memory in terms of Matte-Blanco's 'generalisation' and (in particular) 'symmetry'? This latter quantity, the kind of leveling by which dreams flip-about asymmetrical elements of the remembered life as if they were symmetrical in particular interests me. We are such stuff as memories are made on, after all; and that making often entails not only a dream-logic inversion, but more particularly a dream-like elision of the asymmetric into the symmetric, far-off mountains turnéd into clouds, and the like. You don't need me to tell you where that line comes from, do you.
Posted by Adam Roberts at 02:59