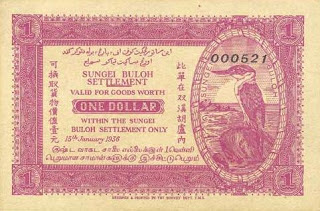 This is one of those topics with such delicious satirical resonance that, if it weren't real, some writer somewhere would have had to invent it. Leprosy colony money was a local currency that circulated only in leprosy sanatoriums or colonies. It reflected the fear that leprosy might be transmitted to uninfected people via money, although, as Wikipedia puts it, 'leprosy is in fact not easily transmitted by casual contact, and such transmission as there is only happens through long term, constant and intimate contact with leprosy sufferers and not contact with everyday objects used by sufferers.' Indeed, in 1938 one Dr. Ryrie in Malaysia proved that paper money was not contaminated with leprosy bacteria. After that the system fell into desuetude. At the top of this post is a rather pretty, though obviously cheaply-made, $1 note of the Sungei Buloh Settlement; and here's a Philippine 1 peso coin. 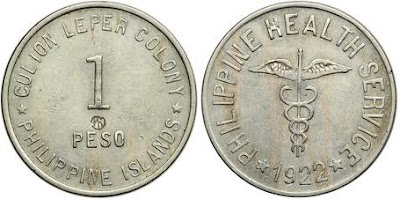 It makes me wonder why nobody has written a story about a society in which money itself is a site of possible infection. Presumably this would have to be electronic money (so presumably the infection would have to be some kind of computer virus, malware that very slowly corrodes the essential online presence of the user: a virtual leprosy). So, for example: you believe Dr Ryrie, don't you? You can't catch leprosy from handling leper colony money. Still. Would you? If someone offered you such a banknote, would you take it? Would you collect such money? Presumably people do, but would you? Would you be happy with your nine-month-old baby chewing on the edge of that 1 peso coin?

Money is dirty. We feel it, almost instinctually. This particular currency makes manifest what is latent in all our dealings with currency.
Posted by Adam Roberts at 01:15