Be Bloody, Humboldt and Resolute 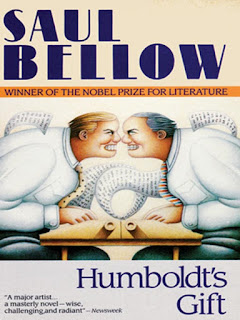 I'm reading Humboldt's Gift (1975) at the moment (I've read a lot of Bellow, but oddly not this one, although it is one of his most acclaimed titles). Good it is, too, as Yoda might say. I find myself thinking: how desperately Martin Amis wishes he had written this novel. No dice there. There's a depth and resonance to the ill-temper of Bellow's imaginative vision that Amis just can't seem to reproduce. With Marty it always come over as common-or-garden grumpiness. With Bellow, it starts to approach something more crankily magnificent. Although in this novel the rage starts slow. Charlie Citrine, the narrator, wrestles with his poisoned oedipal relationship to Humboldt, an older writer, and as ornery an old dinosaur as you please. When Charlie was young, Humboldt nurtured him. After Charlie became successful, Humboldt turned on him:


When reports were brought of the damaging remarks he made I often found that I agreed with them. "They gave Citrine a Pulitzer prize for his book on Wilson and Tumulty. The Pulitzer is for the birds—for the pullets. It's just a dummy newspaper publicity award given by crooks and illiterates."

Here's the bottom of the back of the bashed-about old Penguin edition I'm reading: 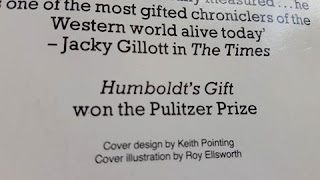