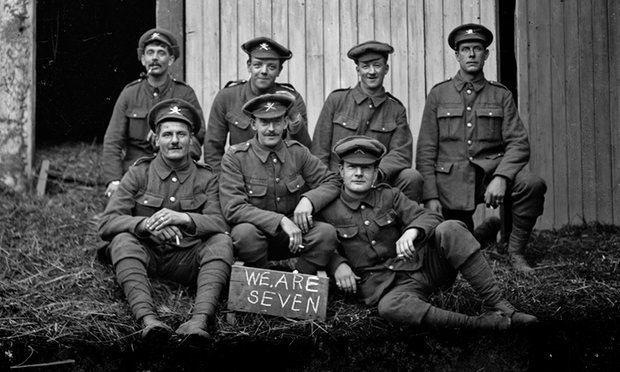 This image, taken by Louis and Antoinette Thuillier, dates presumably to 1914 or 1915, and comes from what the Guardian today calls 'a photographic archive recently retrieved from a farmhouse in Picardy'. (It's a rather foolish Guardian article, that one, actually: 'Previous wars had been conducted like chivalrous tournaments, but now ...' This suggests a writer who has no sense of the broader history of war at all.)

Anyway: that image, at the top, especially struck me. It's partly the sheer human charm of it, the sense of a happy before that implies its own tragic after. It's also the literary connection. That sign! I don't need to tell you that Wordsworth's 'We Are Seven' is a poem about a simple-hearted country child who tells the poem's narrator that she is one of a family of seven. When her adult interlocutor asks for details we discover that only five of her family are actually alive, and that, in the girl's words, 'Two of us in the church-yard lie,/Beneath the church-yard tree'. The adult tries to get the girl to see that 'Ye Are Five', but she insists that their being dead does not separate her siblings from her, and won't give up her belief that 'We Are Seven'.

Don't you think that's a peculiarly eerie literary reference for seven young men, about to go into battle, to peg to their collective portrait? As if two of them are already dead (which two?) and yet somehow still there. This speaks not just to the human wastefulness of war, but also to the uncanny of photography itself, this process that preserves the life-likeness of the dead (or, as it might be, the black-and-white motionless dead-likeness of the living) via its strange new technology.
Posted by Adam Roberts at 00:27