Protocols of the Elders of Simov 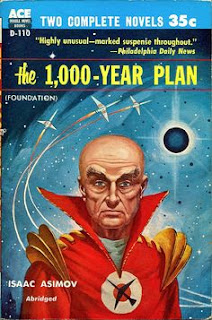 Did Ace really reissue Asimov's Foundation in the 50s under a title phrased after the logic of, I don't know, let's say, Tausendjähriges Plannen und Reich? And did they really bung a sinister stern-faced bald fellow on the cover, sporting a logo somewhat resembling a crooked black cross in a white circle against a red background?

It seems they did.

Anyway: late in his career, in the 1980s and 1990s, Asimov pulled his whole imagined cosmos together, uniting in one shared universe and one timeline his many individual Foundation stories with his many individual Robot stories. Now, since there were no robots in the original Foundation stories (written between 1942 and the early 1950s); and since the early robot stories (I, Robot (1950), The Caves of Steel (1953) and so on) take place in a cosmos that has neither Galactic Empire nor Foundation, this took some finessing. What Asimov did was to add an extra 'zeroth' law to his three laws of robotics such that, by contorting narrative and worldbuilding plausibility somewhat, all the robots go into hiding and start secretly manipulating the events of human history, during the Galactic Empire and its collapse, in order to bring about far-future utopia.

In the unified Foundation and Robot stories from the 1980s-90s Asimov is adumbrating a specific worldview. It is worldview that says: the world is being controlled by an occult conspiracy. It says: behind the world there is a secret cabal, hidden away, manipulating the human world for its own ends. And furthermore: though the members of this cabal might look human, and might even pass as human, they are fundamentally not human. In point of fact, and despite their cunning and cleverness, they are less than human. Nonetheless, they are influencing everything you do, and all the social and political structures under which you live, with their secret conspiracy. Their leader is known by the Jewish name 'Daniel' (well, almost). Hmm.

In other news: Isaac Asimov was one of the twentieth-century's most successful and influential Jewish writers.
Posted by Adam Roberts at 01:12