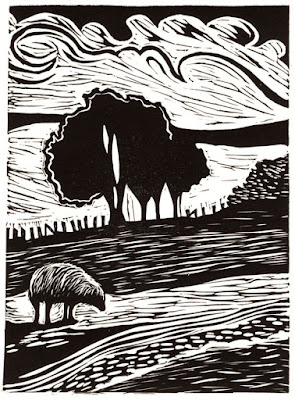 Menalcas said: the core of it, now, is
we're both good men, well met.
Well met. Here
between the giant green quiffs of these elms
with hazels growing in their gaps, in we go.

Mopsus said: you, older than me, should
lead the way. Through weed-coloured shadows
towards this cave and its bead curtain of vines
I follow.

Menalcas said: we're both good poets, well met.
Well met.
Who's better, in all this hilly country?
Maybe only Amyntas.

Menalcas said: you start then. Subject: Phyllis,
her beauty. Or: Alcon. Or: Codrus's jollies.
Don't fret about sheep. Tityrus'll tend the sheep.

Mopsus said: I could, I don't know, maybe,
how about, how about my Daphnis one?
I scritched it into the bark of a green beech,
words and stave and tadpole notes threaded on the lines.
Is it as good as Amyntas though? I don't know.

Menalcas said: the way a willow looks
like a blurred photo of itself,
lens twitched up at just the wrong time?
That's him.
You're the electroplated leaves of an olive
shining bosky silver in the sunlight.

So Mopsus said: "Daphnis' life cut off, as the sabre slides on through where the bottle-neck bulges out to its cork-brained head, and snap, gushes of foaming grief, and it fizzes in your gut, and the Nymphs' faces a mess of tears and snot, hazels in their despair throwing bush-branches wide like wings, the very rivers bereaved, his mother grappling with the corpse like a drunken wrestler, shouting gods: cruel and stars: cruel and one African lion, mouth a gluey gash, puts a voice to its roaring grief, and tigers too, tigers, tigers, harnessed like shire horses, and Bacchus, drinking to forget, reeling around the fountain, and the vine cords itself about trees like veins and arteries in blue and red, and after the Fates carried your body off, shoulder high, your arms were all gibbon-floppy, a life-sized manikin, dead. Pales has debouched from our fields, and even Apollo has gone, and all the stalks of barley have shot off on their million miniature rockets into orbit and the furrows a centre parting to weeds lank as unwashed hair, and the bully thistles have flourished their razors at the narcissi and glassed the soft violets, in the face no less, and taken over the whole row, and the sky has emptied its binbag of old leaves all over the ground and a solar eclipse puts a shadow filter on the world's lense, and on the gravestone it says Daphnis/[INSERT DATES HERE]/Lived in the woods/Famed beyond them/Drop Dead Gorgeous."

Menalcas said: your words unknot the world.
They strop the leather band of my heart like a razor.
They are their own body.
They are the trickling echo of water in the Zen garden.
They unbreak horses and manumit housepet cats and dogs.
And now it's my turn.

Mopsus said: the prospect of you singing is a gift as big as the sun
It is as close as the moon.
It is an aircraft sliding like a rice grain
over the blue ceramic of high sky
drawing a bridal train of white behind it.
It's the shivery pulse in my jugular.
It is all Stimichon promised, years ago.

So Menalcas said: “Daphnis approaching the Door Itself, squinting in the light, presses the brass nubbin, and a bell spills metallic vibration into the depths of the house, and his feet are standing on a doormat of clouds and stars, and subaerially the woods and all the countryside dance beneath him, dance, dance like nobody's looking. Pan is wearing tehmat and chagi and he dances Bhangra, the shepherds shug, the Dryad girls lindy hop, a wolf buries his tilted face in the wool of a sheep and weeps real tears of real remorse for all the evil he previously did to sheepkind as the ghost of Daphnis stand right there and says peace, man, peace, mountains with hippy beards of woodland do the stomp, and groves of trees are struck like cymbals, god is alive and he is Menalcas so be kind to one another all you folk and don't do evil, and hwaet!s this? Four altars!—two, see, for you, Daphnis; two, see, for you Phoebus. That's why I say we fill two cups with milk so fresh it foams like white beer. I say two osaka Japanese porcelain bowls topped up with olive oil as thick as deseil, I say: nibbles, of course, and of course wine—winter vintage, cooled, bubbles at the brim like a curving line of perfectly arranged couscous grains. This bottle is a little dusty, but the label says Chian, and that says it all. Damoetas and Lyctian Aegon are going to sing for me, and Alphesiboeus will hoof the beat with his dancing feet. Its a wake, for the best of guys, which means there's a liturgy we have to follow now: give our word of honour to the Nymphs, and purify our fields with monoammonium phosphate and various kinds of potassium sulfate. From behind that boar looks like Cousin It. From above those fish look shavings of pure silver. From where we're sitting the bees look like dust caught in a tiny whirl of updrifting breeze. From what I can here the cicadas are laughing. Here's a glass to you, Daphnis, here's mud in your eye, here's a health to Bacchus and Ceres, and year after year.”

Mopsus said: what would be an acceptable gift?
To reward such a song, I mean?
It was sweeter than the natural sibilance of the south wind.
It would no more quit
than the randy ocean will quit banging the shoreline.
It was as lovely as zizag streams inset into the mountain.

Menalcas said: gifts, sure: take this guitar.
It was what I wrote
'Corydon On Fire For Lovely Alexis' on.
and also
'Meliboeus Maybe (Whose Flock Do You Think This Is?)'

Mopsus said: Wow, thanks. Thanks!
You can have my crook, which Antigenes really wants,
but can't have: a long-tail question mark
in bronze and wood. It's yours.
Posted by Adam Roberts at 11:21