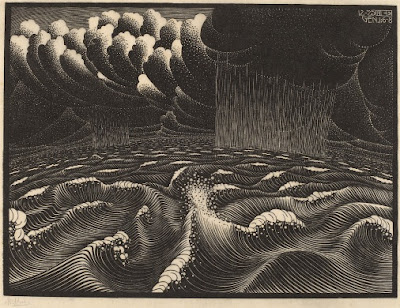 It began when I was in Sicily,
Mused-up to the gills
thinking of the old stories

and how the world was made.

Sicily maps a goat's head
straining its Italian leash to nibble Tunis:
chlorine-coloured woods,
a pallor of soil
the punishing sun
and there I was, staring at the perfect sea-blue
and thinking about writing my epic
when Apollo put his tongue in my ear
gave me the goddam common courtesy of a reach-around
and said: “keep your sheep plump, boyo
and your verse slender.”

So I dropped a line to Varus:
he'd have to hire someone else to do the
praise-Varus-and-glorify-war thing.
Not that I'll be missed.
Put 'Varus' on the title page and we're in bestsellerland.
My name might as well be 'Remainder Stock'
for all the good it does sales.

Wait. Let me Irish-up this coffee,
which is to say, this poem,
with a slug of Pierian brand Muse.

Anyway, this happened: the boys
Chromis and Mnasyllos
broke into Silenus's house
found the old lecher asleep,
snoring like waterfall,
veins thick as straining tendons,
brain still drenched in yesterday's wine,
out for the count;
a mug on its side next to him
screaming silently
and the whole of his room a mess of leaves
and rotting petals.
So they BDSM'd him with ropes,
creepers, bindweed. Hog-tied.
It might've been sexy, I guess
but it wasn't. Real menace in their faces.
In swaggered Aegle,
white romper-suit, black boots and bowler,
cog-pattern mascara round one eye only,
and she landed a few blows,
smeared mush and paint on his face.
He was sobbing, begging, bruises
bursting with pain, his heart
kept banging on the door of cardiac arrest
desperate to be let inside.
“I'll do anything,” he said, over and over,
like he was vomiting the words;
and “please”, “I'm begging you, please”
and “please”, as if that would sway them.
As if they weren't plenty pleased already.

We see animals running, grappling
other animals, teeth-to-nape,
and we think they're dancing.

We see the oaks in the wind
ponderously banging their heads
listening to a song only they can hear.

But not even Apollo can make Parnassus move.
Not even Orpheus can wipe the disdain
from the faces of Rhodope and Ismarus
filing their nails, tutting.

In the beginning
the huge world was disembarrassed of its void
by seeds flying
falling
inoculating earth and air and sea against nothingness;
and kindling, quick, into
hill-sized ocean swells of liquid fire
parabolas of elemental matter intersecting
spiraling and zoning-in
whirling into a solid globe
metal and stone baked together
and polished to cannonball smoothness
big enough to electroplate whole continents and seas
onto its surface.

Nereus, reeking of brine,
sopping seaweed dreadlocks
muscles like ribbed sand at low tide:
and he was locked away from the land.

The landscape rose like bread
under an oven sun
shunting clouds higher
they left their rain behind
and it fell down, or the land came up
hard to say which it was:
forests spread, and from up here
they looked like green-mould on the white fresh land.

Creatures twitched into frankenstein life
lurched over mountains
wholly uncomprehending of them.

Pyrhha threw stones
in the potter sense of the word,
wrung rock like a dishcloth
and the twisted braids became men and women.
Saturn in charge. Eagles from the Caucasus
with Nazi insignia on their wings
tuned friction's shriek into a slow crescendo
as they'd stuka down on Prometheus.

Sailors said: we lost touch with Hylas.
No idea where he is living now.
Doesn't seem to be even on social media.
I mean, we call out, and this new-solidified shoreline
bounces those soundwaves back, “Hylas! Hylas!
Where are you?” Zilch.

Pasiphaë's bestiality: never an easy sell.
On the other hand, this was no ordinary bull—white
as the virginity of Christ, powerfully built,
a good listener, placid eyed,
face white-lead-paint pale
ink-black ears two perfectly rounded parallelograms
haunches, thighs, cock, irresistible
Sure, it drove her mad. What lust doesn't?
Remember when Proteus's daughters
got punished for their pride?
made to believe they were all cows?
scrambling through the mud in all weathers
biting at grass, making moo.
Though they didn't go so far as
actually fucking the bulls.
So, no luck for you girl.
You're on your own now, while he
lowers a vast expanse of white flank
onto an upholstery of purple hyacinths,
under that holly tree's crenulated shadow
chewing the colourless grass,
chatting-up some heifer from the populous herd.
And you're shut it up, ladies,
Dicte's ladies,
Lock down the whole forest,
Key-in the security code. Keep that bull in,
Maybe then I can track him down,
pick out line of coffee-bean patterns
where his hoofs have kicked divots from the lawn.
Maybe he's following the crowd. Or back at the stall. Girl, please.

Another woman, another obsession:
an apple, red-gold like a salmon's egg,
large and firm as a football,
from the Hesperides sunset orchards.

Phaëthon’s sisters' eczema
spread over their whole skin, and consolidated
into a crust of moss-coloured bark,
and when they next checked they were
birch trees, taller than ever before.

Gallus's cross-country run took him down by
the streams of Permessus, where
the officials, wearing luminous tabards,
redirected him by waving their IAAF rule books
sent him off up the Aonian hills,
and off he went,
panting in time to his heel-strikes on the dirt,
Phoebus's music in his ear-buds
though Linus was shouting after him,
really putting some welly into his voice,
face the colour of tizer, cords
of his neck tight as bass guitar strings,
yelling: “You forgot your Strat-o-caster, man!
The Muses's own Fender
the one the old Ascraean used to play,
those songs of his that made ash trees jig
and tumbledowned whole mountains.
Don't leave it behind, man!
Do the one about the birth of the Grynean wood,
rock and roll can never die, man.
Never die!”

We need to talk about sea-wolf Scylla.
Nisus was her father.
Her midriff belted around with
howling harrowing monsters
and she the Torpedo
the naval contact mine made flesh,
where the ships trail their wakes
from Ithaca to Sicily (my beloved Sicily)
until inadvertently easing their boats' chins
against the trigger
the tick-tick of contact
and a deep-bodied woof from
the dog throat of the whole sea
hurling up to spill back down
a shower of brine-rain, and turn
the waters a swirl of suck

a sailor's face swoops past you, and that's
terror you can see in his eyes.
But he's gone

to where its always dark
and the water is dense with death
and the light never is.

Or Tereus, the glutton.
His abuse of young Philomela
stuck in his throat eventually.

Omnivorous Phoebus's Never Ending Tour
reworking his old songs
so that we barely recognise them
always on the road, always playing.
Eurotas in the mosh-pit, near the front
has all the lyrics by heart.
Silenus sings harmonies.
The stadium is so full it looks like
a curving valley forest
all these voices together flinging
songs at the stars,
till Vesper whispers the magic word
into the ears of every one of the sheep
and they all scuttle off, lock-hoof, clone herd,
and the day is folded away and stacked
in a storeroom whose walls and ceiling
are studded all over with twinkling stars.
Posted by Adam Roberts at 11:22