When this cartoon is over, you will have nothing that you want 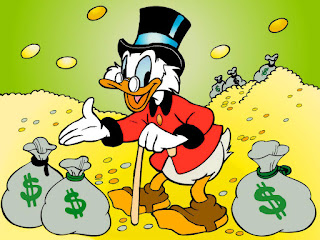 The beak does not look good on you, it's a duck's bill, and when you come to the microphone you sound like you're speaking through a kazoo. Nobody seems sure, and even you don't know, whether you could even grow a beard under that bill, for all your bushy side-whiskers. It looks cheap, the beak, the kind of cheap no top-hat can compensate for. Your eyes look dead, grey where the whites should be. That you even have whites to your eyes is wrong, if you think about it for two seconds. I guess people don't devote that much time to thinking about it. But then people don't want a president to be that tasty with orange sauce. You know that now. Why doesn't someone in your entourage dare to say these things? So sad. The fans are wild about you, and Donald is as loyal as they come, but Huey, Dewey and Louie are reassuring in that stilted way of hospital visitors. And The Media treat you like the village idiot. This is painful for a wealthy duck from the Bear Mountain Mansion trying to win respect in the big city, in LA and Disneyland, where pathos is for live-action only, and cartoon characters are only there to be mocked and derided. When you came over 40 years ago, you discovered that in entertainment, the press, politics, finance, everywhere you went, you ran into humans, and they are not like you: humans didn't go in for diving into swimming-pools full of gold coins or buying magic hourglasses or travelling back in time to Ancient Egypt to retrieve a pharaoh's papyrus. — they showed off by way of philanthropy or having successful kids. The swimming-pools full of gold coins were totally duck, the bragging, the honking, but you wanted to be liked by Those People. You wanted Pixar to include you in an intensely moving pre-credits sequence tracing how you fell in love as a young duck and married but never had kids and then she got sick and slowly died and everyone in the cinema is weeping, actually weeping heartfelt tears, as you turn into this cantakerous old geezer from the sheer bereaved psychic pain. But Pixar is a separate commercial arm, you're told, and ducks like you don't belong in that stable, its strictly the ludicrous and humiliating for you. 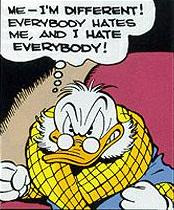 Meanwhile, you keep plugging away. You try to be be serious about this crazy idea; although there's no profit in it. It's the hardest work you've ever done. You walk out and your huge orange bill goes first, everywhere, and you rant and hiss and splutter for an hour about stuff that means nothing and the fans laugh and you wish you could level with them for once and say one true thing: I am literally a two-dimensional character and you're laughing at me to cover your fear that you are too, you all are, all precisely as vacant and depthless and money-addicted as I am and when this cartoon is over you will have nothing that you want.
Posted by Adam Roberts at 01:09