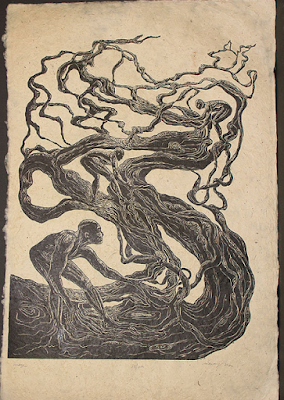 Here's a link to the first of these. Vergil's second eclogue, though numbered '2', may well have been the first written. It is pretty closely based on two of the Idylls of Theocritus: his third, in which a neglected lover bemoans his condition, and his eleventh, in which the Cyclops Polyphemus is hopelessly in love with the sea-nymph Galatea, and finds solace for his pain in singing. Vergil's shepherd's name, 'Corydon', means songbird: (from the Greek κόρυδος korudos "lark"). It's a name first used in Theocritus's fourth Idyll, and was used again by Siculus as the name for his pastoral shepherd, as well as (obviously) by Vergil, such that pretty soon it became the stock name for a shepherd, and later Classical and English Renaissance pastoral is crowded with Corydons. The name Alexis is from Ἄλεξις ‎(which means 'helper, defender') and is related to the heroic warrior name Alexander; so I like to think that the Alexis of this poem is pretty beefy. Hard to be sure, of course. The original Latin can be found here, along with an English translation.


Beauty slammed the shepherd Corydon hard
the beauty of Alexis
his master's pet
love burning in the air of Cory's soul.
To numb his pain
here he comes, moping through the tree-maze
threading the entrails of woodland
beeches hoarding shade in their summits

and he sings his inanity to the hills:

"You, virulent Alexis,
my birdsong songs mean nothing to you.
Your lack of pity is an incomprehensible
hieroglyph,
you will inevitably laboriously
eventually kill me.
Even the hot cows, fierce with
joyful breath, even they
suck relief from the webs of shade;
even the verdigris lizards
vanish down the plughole of a
thistle-textured thornhedge. Thestylis
grinds a sludge from savoury herbs
oily garlic, thyme,
stiff pestle driving into the yearning mortar
over and over, reapers sweating, scorched,
standing erect against the blindness of sunlight.
Not me. I bloodhound your traces
through wildernesses of vegetation
copses huddled against the sun's
silent first-day-of-the-Somme
bombardment of heat
and only the cicadas are singing
their withered song
only the cicadas,
only
and me.

I should have swallowed
the petulant sourness of that girl Amaryllis,
or maybe gone after Menalcas
though his skin is dark as soil
and yours is white like
purity itself
ice-cumbered, cloudlessly
cloud-coloured.
But boy, you can't rely forever on the
come-fuck-me bloom of your skin.
It will happen to you, the same thing that
happens to the pale privet and its
grape-clusters of white flowers:
slashed, bladed and rooted out.
The mauve hyacinths too:
wrecked, and left to rot.

You disrespect me, Alexis. You don't know me at all.
You don't know how rich in cows,
how much the tycoon I am
where snow-coloured milk is concerned.
I own no fewer than one thousand lambs
meandering over Sicilian hills.
Abundance of milk, it gushes for me
summer and winter, sweet white fluid
in my mouth and spilling over my mouth.
I model my singing on Amphion, from Dirce,
and how he would croon the herds home
over fields in Aracynthus, in Greece.

Handsome too,
though I say so myself,
I mirror admire myself,
why not?
when the winds go limp, and the waters
settle in lithe stillness, perfectly flat
the curve of shore my boudoir
the sea itself my who-is-the-fairest-of-them-all
hushing, it's me, it's me.
Daphnis thinks so too:
reflected beauty is truth. Image makes magic.

Oh! imagine if you consented to dwell where I dwell
a small cottage in the open fields,
toad-shaped under thatch,
squatting under the hill
home, and we would hunt together
shoot arrows to prick down deer,
grasp the green osier-wand to whip
the rocking rumps of our straggling flock!
You and me, babe, you and me,
singing together
songs from the forestlands
better singing than Pan himself,
prime Pan, godfather of music
maker of musical instruments, a god and
a lover of sheep, and shepherds of sheep.

You would not regret
fitting the stalk of the flute's
erect length into your mouth,
to chafe your lip.
Do it like Amyntas used to.
Seven tubes unequally long
wax-stuck together make up my pipe.
Damoetas gave it to me, and that made
Amyntas jealous, the idiot.
It's yours.
And more than that: a duo of roes
jetsam of a dangerous valley
hides leoparded with white spots
so young they syphon
a whole udderful of ewe milk every day
into their own bellies,
I'm keeping them for you.
Thestylis begs me for them, on her knees,
head at crotch-height
kneel all she likes, they're yours,
they're my gift to the gem light in your eyes.

Come over here, oh you beauty: you get
gifts of heaped nymph lilies
Naiad, so in love, in love with you,
gashes violet petals from their stems, shreds
poppy heads, rust-red, unseams
narcissus and sugar-smelling fennel flower;
winds them into a rope
with sepia cassia and other sweet herbs,
tangles in fragile hyacinth
and citrine marigolds.
My own fingers will fumble at
quinces, skin fuzzed with the cilia of pale down,
and chestnuts.
Amaryllis always loved those.
Plums, waxen globules, maroon
as a glans, I gather that fruit too.
Some laurels—yes, you, laurels
I'm taking you down from your branch
and your friend, myrtle,
both sweet savourable odours.

Oh what a fucking peasant you are, Corydon.
Like Alexis cares for gifts.
Like that would even seduce, I don't know,
Iollas, even.
Fuck my life.
Seriously.
What was I thinking? The south wind
has snuck past me and mugged my flowers,
and while I was moping after that boy, wild boar
have pigged their way into my clear wells of water.
You're demented. Who are you even running from?
Gods have taken trees as walls and roof
Dardan Paris too.
Pallas fitted together the jigsaw pieces
into full-sized cities
tiled and tessellated and undulating with bright roofs
the way only a goddess can
so she can live there.
Forest is my passion.
The lioness with the psycho-eyes pursues the wolf,
a thousand yard stare
distance she covers in seconds;
the wolf runs down she-goat, even the she-goat
gets to tear the innards from
the flowering broom bushes,
and Corydon
and Alexis,
each keelhauled by their own longing.
Here comes the ox, home
with plough up-tilted like a heiling arm.
Tumescent shadows grow and harden
to twice their length
as the sun ducks and covers, arms over its head,
chin on its knees, a bundle of
night terrors.
This love has simmered and scorched my heart
blackened it, blistered me,
done everything but numb me.
You can't stop feeling it
Ah! Corydon, Corydon, searing.
You haven't pruned your dangling vine
slopping its dreadlock off the leaf-swarming elm;
weave pliant wicker together? Scorned
scorned.
Go looking for a new Alexis."
Posted by Adam Roberts at 23:51