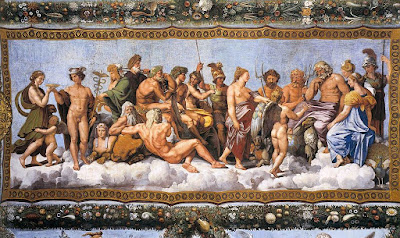 I'm afraid this isn't very carefully thought-through. At any rate, these jumbled thoughts are intended in a purely descriptive, and not in a prescriptive, sense.

I wonder if polytheistic societies are less likely to get into wars that are premised on conceptions of heresy or blasphemy. After all presumably polytheists are as it were primed to accept that there are many gods; so encountering a society who worships a different god can be integrated into their worldview without much difficulty. Is that right, though? Of course, the ostensible reasons humans give for going to war are often not the actual reasons; and of course polytheists tend to believe that some gods are more powerful and important than other ones, so it's not hard to find examples of such societies going to war to show that their god is stronger. That's more or less what Moses does in Egypt, after all. Still, there's something here I think: I'm thinking of the religious praxis in Ancient Greece and Classical Rome. The urbs separated out political religion from individual religion, such that, provided you were willing to accept (for instance) the divinity of Augustus, you were left alone to worship as a Jew or a Phoenician or whatever.

Part of this was the notion widely accepted in the Classical world that different gods from different cultures were basically versions of the same divinities. This is commented on in a more or less neutral way by writers from the period: it's simply accepted that the Roman Jove is effectively the same god as the Greek Zeus and the German Tius and so on. What I mean is: there aren't any Classical texts where a Roman says, as it might be, 'of course we worship the true divine father under his true name, Jove; not like those heretical Greeks with their blasphemous perversion of religion of so-called Zeus'. But precisely that attitude, or something like it, seems to me to have become part of the way different later, monotheistic societies and cultures have interacted. But I wonder. Do Sunni Muslims, say, think of Shia Muslims in terms of "well they basically worship the same God and revere the same prophet as we do, though under slightly different rubrics'? Or do they think: "their worship is such a profound misprison of the true nature of God and the Prophet they can't even truly be called Muslims at all"? Do Evangelical Protestants consider Catholics, Jews and Muslims to be worshippers of the same, one true God? Clearly some do; but others clearly don't. Is the second group larger than the first? Are monotheists liable to get angrier with other monotheists who don't worship the mono-theos in what the former believe to be the right way, than polytheists are liable to get angry with other polytheists whose pantheon is different? I wonder how we might check that.

The rationale, I suppose, would be something like: being a polytheist requires a more flexible attitude to the divine, since you already believe that the divine comes in all sorts of different shapes and flavours, where being a monotheist requires you to be less flexible, or if you prefer more rigorous and exacting, about what you believe. It does seem to me that polytheism suits most humans better than a strict monotheism, since a polytheistic pantheon can accommodate a wide range of different sorts of people, or even different moods and needs of individual people. Under the logic of monotheism the different sorts of people must fit themselves to the divine, where under the logic of polytheism the divine fits itself to the human. And, of course, a monotheistic system like 'Christianity' is, in many actual cases, functionally a polytheism: so there are three gods in the central godhead, as well as goddesses (the Virgin Mary, for instance: functionally if not theologically a goddess), saints and so on. But presumably the oneness of God matters to a monotheist, and I wonder if that results in a lack of hospitality to other versions of that oneness?
Posted by Adam Roberts at 09:39